Without politics, protest is at the mercy of the elites

The Guardian (UK) Wednesday, July 3, 2013, p. 29 Seumas Milne From Egypt to Brazil street action is driving change ? but organisation is essential if it is not to be hijacked or disarmed. Two years after the Arab uprisings fuelled a wave of protests and occupations across the world, mass demonstrations have returned to

Egypt’s army holding Morsi, security forces arrested the head of the Muslim Brotherhood’s Freedom and Justice Party and other 300 of its members as deadly clashes erupted

Obama orders US to review aid to Egypt

The U.S. president urged Egypt’s military to hand back control to a democratic, civilian government without delay

Adly Mansour had been head of the Constitutional Court for just two days, named by Morsi himself

Egypt, and the world’s revolt

How do Egypt’s latest huge street protests relate to popular eruptions elsewhere in the world? A war involving Egypt and Syria in 1973 supplies part of the answer.

Meet Adly Mansour, the Judge Who Is Now (Sort of) Running Egypt

Mohamed Morsy is now a former president of Egypt. After tipping its hand by seizing the country’s state broadcasters and moving armored vehicles into Cairo, the military deposed Egypt’s first freely elected leader on Wednesday and installed Adly Mansour, head of Egypt’s Supreme Constitutional Court, as interim head of state. The coup comes on the heels of days of unrest — including massive anti-government demonstrations that drew millions into the street over the weekend — and the lapse of a deadline set by the military for Morsy to form a coalition government.[[BREAK]] 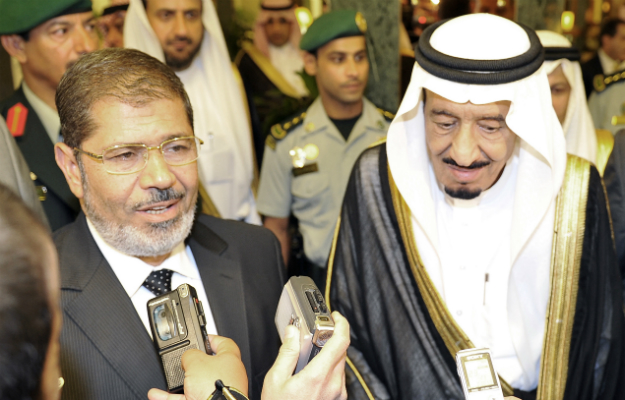 Mohamed Morsy, the now-ousted president of Egypt, is still protesting the military coup that is forcing him from office, but at least two countries have wasted little time in congratulating his successor. (Above, Morsy is seen visiting Saudi Arabia in happier times.)[[BREAK]]

The CrisisMappers Twitter feed has shared a number of maps depicting the ongoing protests in Egypt. Here is a collection of them. Do let me know if we?re missing any. To learn more about crisis mapping, read this blog post: What is Crisis Mapping? and joinwww.CrisisMappers.net. For a protest map of the demonstrations in Khartoum, Sudan, see this link. 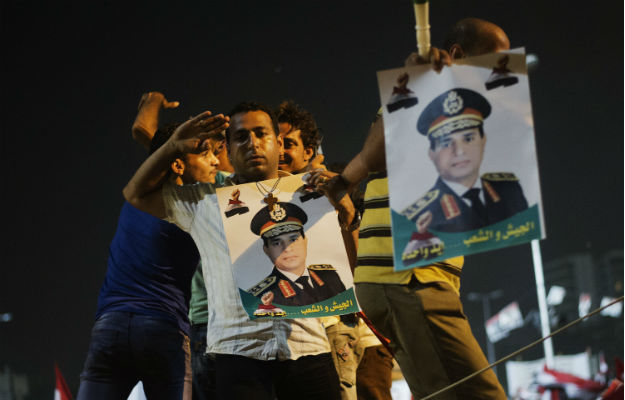 CAIRO — It wasn’t that long ago that Mohamed was protesting against Egypt’s generals. Now he’s welcoming their overthrow of the country’s elected president.

Pro-Morsy Crowd Defends Their President With Rocks, Chants, and Firecrackers 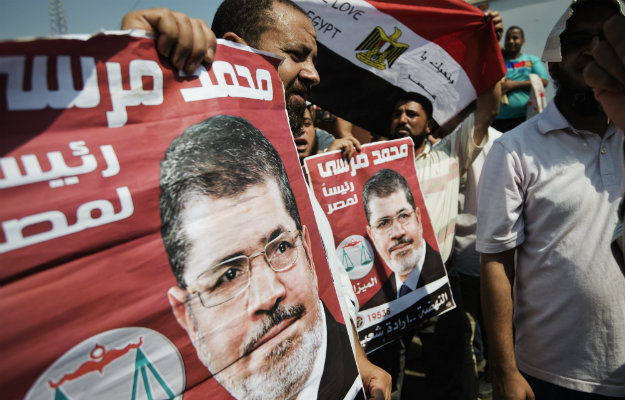 CAIRO — The world will see this city tonight through the prism of Tahrir Square, with tens of thousands of anti-government protesters gathering to raucously celebrate their new freedom. But not far away, there was a different set of demonstrations going on. And far from massive parties, they seemed to be under siege. 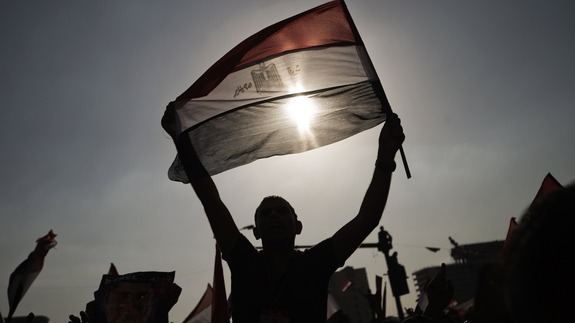 Egyptian President Mohamed Morsi is refusing to relinquish power, and the military has threatened a coup. Now, millions are taking to the streets in protest for and against Morsi’s rule. The untenable situation is dragging the country back into political upheaval one year after Morsi was elected and the country began its ongoing experiment with democracy.

?Authoritarianism in the name of Islam is dead,? messaged one Egyptian activist last Sunday, as millions gathered in the streets to denounce the rule of President Mohamed Morsi and his Muslim Brotherhood government.

Over the past three decades, when American officials would (gently) press Egypt?s Hosni Mubarak to stop jailing his opponents and initiate more democratic reforms, he would invariably snap back: ?Do you want the Muslim Brotherhood in power?? Wednesday?s events suggest that Egyptians continue to face this choice, between military dictatorship and an illiberal democracy. To succeed, the new leadership in Egypt has to find a way to reject both. That?s a task for Egyptians, not for the United States.

The ouster of Egyptian President Mohamed Morsi proves that democracy does not work in non-Western states.

A year of democratic farce

Samir Amin, Egyptian philosopher and economist, director of the Third World Forum in Dakar, talks about the last year in Egypt with the Brotherhood in power, interviewed by Giuseppe Acconcia.

Who’s Who in Egypt’s Coup?

When Gen. Abdel Fattah al-Sisi announced the ouster of Egyptian President Mohamed Morsy on Wednesday, he did so with the support of a carefully selected collection of Egyptian officers, politicians, clerics, and academics. They represent a broad swath of the Egyptian population and are clearly meant to give political and religious credibility to the new interim government. Here’s a who’s who.[[BREAK]] 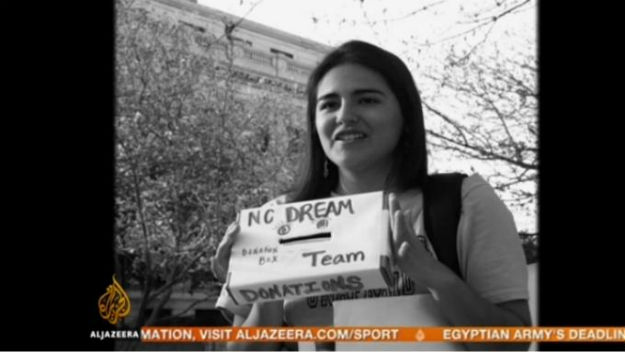 There’s been an abundance of — deserved — criticism of CNN’s coverage today, which spent much of the morning focused on the ongoing George Zimmerman trial while giving short shrift to the showdown between the military and Muslim Brotherhood in Egypt.

Exclusive: Egyptian Ambassador to U.S.: Morsy Ouster ‘Not a Coup” but ‘a Popular Uprising’

On July 3, General Abdel Fattah al-Sisi, the Egyptian defense minister, announced the removal of President Mohamed Morsy, Egypt’s first democratically elected president, and the suspension of the Egyptian constitution. It’s a very uncertain time now for Egypt, and events are still in motion — at press time, Morsy’s office called his ouster a “complete military coup” — a view not shared by Egyptian Ambassador to the United States Mohamed Tawfik. As news of the military’s move broke, I sat down with the ambassador at his embassy, which was surprisingly quiet considering Egypt’s current turmoil.

Millions of Egyptians held mass rallies on the first anniversary of former President Mohamed Morsi to protest his rule. As Tahrir Square, the epicentre of the Egyptian revolution in downtown Cairo, began to fill up, anti-sexual harassment groups geared up to stand up to sexual violence against female protesters. Previous mass rallies have been witnessing a rise in mob sexual assaults, particularly in Tahrir Square.

Turkey has begun to evaluate the potential impacts of the Egyptian army?s overthrow of Morsi on the region 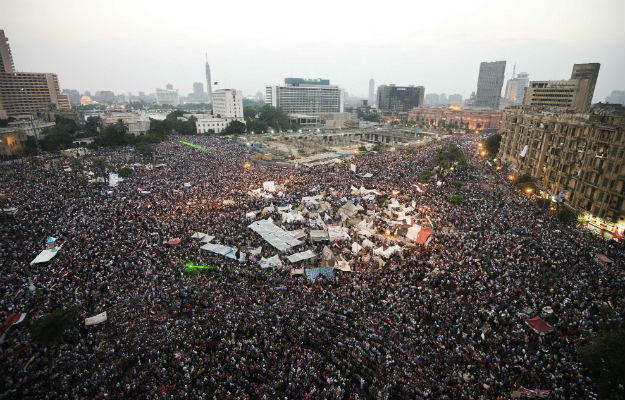 It’s official: Mohamed Morsy is no longer the President of Egypt. In a July 3rd press conference on state television, General Abdel Fattah al-Sisi announced the removal of Morsy, the suspension of the Egyptian constitution, and the establishment of an interim government led by the former president of the Constitutional Court, Adly Mansour.

Morsi Ousted While Sparring With Egyptian Army on Social Media 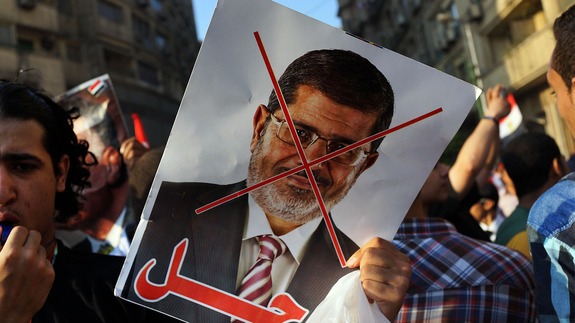 Egyptian President Mohamed Morsi was overthrown Wednesday by the Egyptian military following three days of occasionally violent street protests across the country. The Supreme Council of the Armed Forces (SCAF) suspended the constitution and said the Chief Justice would assume presidential powers until a new election could be held.

At Gawker, Max Read gathers accounts from Twitter and elswhere about the unfurling chaos in Cairo: “The Army is said to have placed a travel ban on Morsi and other members of the Muslim Brotherhood. In Tahrir Square, the huge anti-Morsi protest that spurred the Army to act continues; elsewhere, Muslim Brotherhood party members and Morsi supporters are holding counter-protests.”

Morsi’s one-year reign was cut short, after massive protests across Egypt calling for him to resign started on June 30.

Mohamed Morsi, the Muslim Brotherhood senior member, is no longer the president of Egypt. Morsi’s one-year reign was cut short, after massive protests across Egypt calling for him to resign started on June 30.

CAIRO – The army is back. Maybe not in politics and in the street, but at least on the screen. In a statement read out on state television on Monday night, the Egyptian Armed Forces gave Islamist president Mohammed Morsi 48 hours to respond to the wave of mass protest demanding his ouster. ?If the demands of the people are not met in this period ? the army ? will announce a future roadmap and measures to oversee its implementation? the statement said.

Islam and democracy: Tunisia at a crossroads

Ennahda’s attempts to institutionalise its power and silence its opposition cannot be condoned. Nevertheless, Tunisia?s stymied liberalisation process must be understood within the broader context of domestic power dynamics, rather than solely through the lens of an ?anti-democratic? Islamist regime.

1 thought on “After the coup. A roundup on #Egypt”