After losing out on her preferred coalition partners, Germany’s newly re-elected chancellor, Angela Merkel, faces a number of hurdles in securing a power-sharing deal with rival left-leaning parties.

While Merkel and her Christian Democratic Union (CDU) won a resounding victory in Germany?s general elections on Sunday (22 September), further cementing her position as the country’s unassailable leader, the results have paved the way for a period of instability as she faces the difficult task of building a coalition government with rival left-wing politicians.

SPD split over alliance with centre-right

Ms Merkel, who is five seats short of an absolute majority, can use the threat of a ?black-green? coalition to persuade the SPD to do a deal
Merkel: Queen of the black forest
In case you wondered about just how crushing Merkel’s victory in Sunday’s German elections was, check this out.

Goulard: German liberals were punished for abandoning the EU

French liberal MEP Sylvie Goulard said that the German liberal FDP party, which failed to pass the 5% threshold for returning to the Bundestag in last Sunday?s elections, had been punished for ?having lost their European commitment?.

Goulard said that during the eurozone crisis, German Chancellor Angela Merkel had ?the brake in her hands? to keep Germany’s financial commitments to the European Union at the minimum, and blamed the Free Democratic party (FDP) for having sided with her.

Apart from a spectacular victory of Chancellor Merkel, it is worth having a closer look at some facts which may broaden our thinking of German politics.

After its victory in the parliamentary election, German Chancellor Angela Merkel’s CDU/CSU alliance has begun the search for a coalition partner. She had already made ‘initial contact’ with SPD chief Sigmar Gabriel, Merkel said on Monday. Commentators conclude that Merkel won the election thanks to her Europe policy and expect the new government to push on with austerity.

Germany?s left-of-centre parties still have a majority, but for the SPD to profit from this it has to rethink its strategy and its identity

What Are The Lessons Of The German Election?

The result of the German election 2013 was noteworthy in many respects and will produce aftershocks for years to come. A close look at the numbers suggests that all parties apart from the CDU/CSU are facing structural problems. The Green party as well as Die Linke have suffered significant losses and are now in single digit territory. In the case of the FDP, the losses were so severe that they even failed to re-enter parliament. But also the SPD, even though the party gained 2.7%, seems to be struggling.

What are the next steps towards forming a coalition in Germany?

As we noted in this morning?s press summary the back and forth over different coalitions and their terms has begun in Germany. So far however all comments are likely strategic and no serious movement is to be expected in the next days. SPD chairman Sigmar Gabriel already stressed that the process will take “weeks and months”.

Will the misfortune of a German Europe remain?

Some points on the German elections

Without doubt ? this election result on Sunday represents a success for the playing out of the persona of Angela Merkel but this is not a victory for the party. The strategy of her campaigners paid off. The SPD did not have an appropriate strategy to counter this personalisation in the campaign.

Is the Spanish Army Punishing Women Who Denounce Sexism? 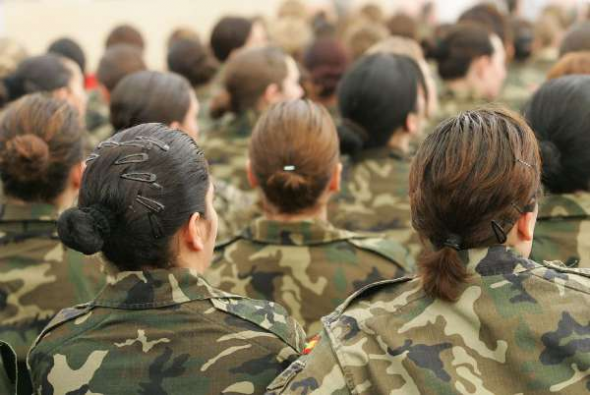 Army women during an act at El Goloso base (Madrid) in 2006. Picture from website laicismo.org.

What would Attenborough say about the Irish genocide?

The exploitation of the Irish economy during the potato famine caused widespread devastation. With the justification of overpopulation, to what extent does David Attenborough echo these intentions in the present day?

Crowdsourcing Accountability of the Electoral Campaign in Portugal

In the run up for this week’s municipal elections in Portugal, the platform Campanha Limpa(Clean Campaign) invites all citizens to help monitor electoral spending, by sending pictures of campaign materials such as posters, banners, signs, gifts and treats, rallies and events.

Today, after months of interviews with Data Protection Authorities and policymakers across Europe, SafeGov.org published the key findings that surfaced in these interviews related to protecting children?s privacy. The report was announced in a press release that also called for ?online service providers, regulators, policymakers, schools and parents to formally ban targeted advertising to students.? The findings and recommendations in the report are based on extensive interviews conducted by SafeGov.org with European data protection officials.

More On The Interpretation Of European Recovery: It Really Isn?t The Supply Side, Stupid

The latest of the Bruegel Institute?s useful Economic Blogs Reviewshas turned to the debate on the reasons for the nascent economic recovery in Europe, and picks up, among others, on my recent columnon these pages.

SPECIAL REPORT / A gulf has opened up in the approaches taken by the two sides in the transatlantic trade talks, with the European Union wanting sector-specific commitments and the United States leaning towards rules that would apply across industries, EurActiv has learned.

EU and US negotiators meeting for a new round of trade talks on 7-11 October might repeatedly agree to disagree, but they are together on one issue: they must make progress on regulatory cooperation.

Poland has been starkly criticised for organising an ?International Coal and Climate Summit? to run parallel with the COP19 UN climate change conference it is hosting in Warsaw this November.

Our Director Mats Persson has an op-ed in today?s Telegraph. See below for the full text.

France’s government unveils its 2014 budget, which shows public debt will hit a record level in 2014

Even though there is no clear roadmap on how to achieve regulatory cooperation – the most difficult chapter in the negotiations for a Transatlantic Trade and Investment Partnership (TTIP) – if there is “full political support, we can achieve what seems impossible”, Markus Beyrer tells EurActiv.

Markus Beyrer is the director-general of BusinessEurope, the largest European business association.

What do you expect from this second round of EU-US trade negotiations?

The European commission published a report last week unveiling a ?193 billion loss in VAT every year among EU member states. In France, the ?32 billions VAT gap might be explained by the use of different data sources, EurActiv.fr reports.

The chancellor of Europe, re-elected

Strengthened by a clear victory in the ballots, Angela Merkel is unlikely to change her austerity course. In the absence of a strong domestic opposition, it is up to the citizens of Europe to challenge her policies.