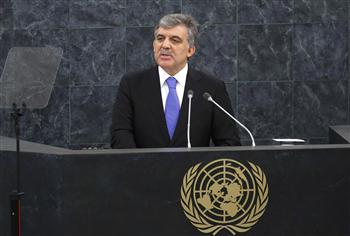 It is a ‘disgrace’ that the United Nations Security Council has failed to uphold its primary responsibility in the Syrian crisis, President Abdullah Gül said at the U.N. General Assembly

The Syrian resistance: a tale of two struggles, Part 2

Probabilities are always shredded by violent conflict, except the probability that freedom and justice will be postponed. See Part One here.

Turkish President Gül welcomed the agreement for the destruction of Syria?s chemical arsenal, but said this should not be a ‘substitute’ for a comprehensive strategy

US President Barack Obama and his Iranian counterpart Hassan Rouhani held out the prospect of a rapprochement at the UN General Assembly. Obama said on Tuesday that he was pinning his hopes on negotiations to resolve the nuclear programme dispute, and Rouhani stated that he would be willing to enter talks. Commentators believe reconciliation will be difficult but also see a cautious rapprochement as offering the chance of a solution to the Syria crisis. 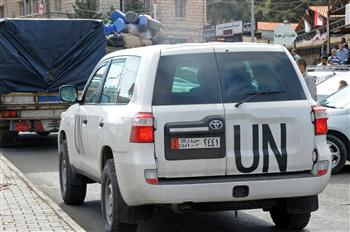 The Washington Post (USA) Tuesday, September 24, 2013, p. A17 By Lally Weymouth In an interview in New York on Sunday, Turkish President Abdullah Gul said that he does not see the U.S.-Russia framework agreement as a solution to the Syria crisis and that Syrian President Bashar Assad must go. Excerpts: Q: What do you

The Daily Star (Lebanon) September 23, 2013, p. 7 By Hugh Pope * Israel is quietly challenging Turkey and Cyprus to make a choice: Move together to develop Israel?s share of the East Mediterranean?s natural gas riches, or stay on the sidelines and perpetuate their decades-old stalemate over Cyprus. The Israelis have stated their preference

Behind the Scenes of the Turkish-Israeli Breakthrough

IAI Working Papers (Istituto Affari Internazionali) 13/15, April 2013, 15 p. by Daniela Huber and Nathalie Tocci * After almost three years of diplomatic stalemate, Israel apologized to Turkey for the killing by the Israel Defence Forces of eight Turkish nationals and one Turkish American during the Gaza Flotilla raid in May 2010. The apology

It?s a pity for Turkish Prime Minister Recep Tayyip Erdoğan not to show up this year in New York at the UN

Obama-Rowhani meeting ‘too complicated’ for Iran: US

The United States offered to set up ‘an encounter’ between President Barack Obama and his new Iranian counterpart during a U.N. summit but it proved ‘too complicated’

The Muslim Brotherhood and President Morsi made many political mistakes during their reign; yet, the Egyptian Military’s present campaign will not reverse these errors but rather exacerbate an already grave situation.

1 thought on “A FP roundup: The US and Iran seek a rapprochement… Turkey still demands more pressure on Syria…”