The European Union is the largest of contributor of development assistance to Egypt, where a military-backed interim government ousted the country?s first democratically elected leader, Mohammed Morsi, on 3 July. After days of bloody unrest, there was no sign that the country’s benefactors were prepared to reduce aid.

Since the coup d?etat in Egypt that toppled the elected president Mohamed Morsi on July 3.. 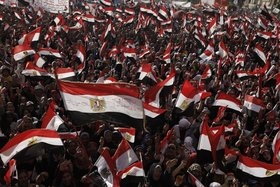 Top news: Interim Egyptian President Adly Mansour laid out a timetable for new elections and a constitutional referendum on Monday, following a brutal crackdown by the military against supporters of ousted President Mohamed Morsy that left at least 51 people dead. Under the plan, amendments to the constitution will be voted on by the public within four and a half months and parliamentary elections will take place within six months (to be followed by a presidential election).

Muslim Brotherhood spokesman Essam al-Erian rejected Adly’s timetable, saying in a Facebook post that it “brings the country back to square one.” He also reiterated that the Brotherhood would continue to push for Morsy’s reinstatement.

The Egyptian crisis and its regional effectsShould Egypt collapse into violence and disarray, supporting the Army might well make the UAE look similar to how Iran and Qatar appear in Syria – one sided backers in a conflict that pulls the country apart rather than unifying it.

Egypt?s interim president has issued a swift timetable for the process of amending the constitution

Egypt is at risk of turning into Algeria of the 1990s when the army?s cancellation of an Islamist victory plunged it into a decade of civil war

Two Turkish journalists were detained in Cairo by the Egyptian army

We’re seeing protests everywhere.  From Brazil to Turkey to Egypt.

What’s going on?  Here are some.

Once ignited, open source protest is hard to stamp out.

Open source protest is usually focused on a single overarching goal.  In most recent cases, it’s a call for a government that isn’t corrupt.

“No corruption” is the type of goal everyone can get behind.  To get a protest going, all there needs to be is a successful trigger event.  Often, that an be as simple as a protest called by some group on Facebook that takes off virally.

Egypt: Back to the future?

Following the military takeover in Egypt last week, many circles have already declared the end of the ?Arab Spring

US has few strings to pull in Egypt crisis

Israel urges US not to freeze Egypt aid: report

Israel has urged Washington not to suspend its annual $1.3 billion in aid to Cairo

Support for and anger towards army after the deaths of 51 in Cairo highlight sense of two competing realities in Egypt.

Egypt’s ?People’s Revolution? in the Eyes of Russians

The protests that have rocked Turkey, Brazil and Bulgaria this summer have finally spilled into Egypt, where massive demonstrations against the Islamic policies of President Mohamed Morsi have led to a second revolution or a cynical military coup (depending on who you ask). Morsi was ousted and arrested, the constitution suspended, and the liberal Mohamed ElBaradei has been appointed interim prime minister. Morsi’s supporters, many of them members of the Muslim Brotherhood, clashed with police and anti-Morsi protesters, leading to widespread civil unrest with at least 30 deaths and over 1000 injuries. With the unrest showing no signs of abating, on July 7, 2013, Russian President Vladimir Putin warned that Egypt was on the road to civil war.

In addition to all the experts, thinkers, pundits and others who have been cited about the loss of democracy in Egypt, let me quote a certain West Point expellee who, in a different context, uttered words that now fit the situation: ?Frankly, my dear, I don?t give a damn.? Rhett Butler neatly summarizes my position on democracy in Egypt.

What?s happening in Egypt is not a second revolution or a ?correction? to the first. It is a coup d?etat that puts the military as firmly in command as it was during the autocratic reign of Hosni Mubarak. So much for the Arab Spring in the region?s most populous country

Al Jazeera has come under fire in Egypt for what many describe as its ?biased? reporting during and following the ousting of former Egyptian president Mohamed Morsi on July 4. The Qatar-based channel is being accused of siding with the Muslim Brotherhood and being its mouthpiece.