The Turkish police?s crackdown against Taksim Gezi Park protesters continued on June 1, as clashes broke out in Istanbul‘s symbolic Istiklal Avenue and the Beşiktaş district.

Turkey protests spread after violence in Istanbul over park demolition

Turkey has been engulfed by a series of protests across several cities after riot police turned Istanbul’s busiest city centre hub into a battleground, deploying tear gas and water cannon against thousands of peaceful demonstrators.

Turkey protests spread after violence in Istanbul over park demolition

Turkey has been engulfed by a series of protests across several cities after riot police turned Istanbul’s busiest city centre hub into a battleground, deploying tear gas and water cannon against thousands of peaceful demonstrators.

Support from the UK;)

A protest in a small Istanbul park has become a lightning rod for grievances against the government, and it could be explosive

This morning, Turkish police surrounded protesters in Taksim Gezi park, the central square in Istanbul, blocked all exits and attacked them with chemical sprays and teargas.

An Occupy-style movement has taken off in Istanbul. The ostensible issue of conflict is modest. Protesters started gathering in the park on 27 May, to oppose its demolition as part of a redevelopment plan. But this is more than an environmental protest. It has become a lightning conductor for all the grievances accumulated against the government. 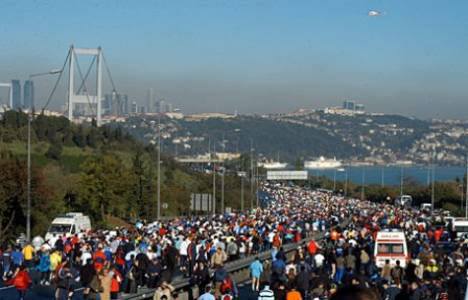 Security forces in Ankara staged a violent crackdown on demonstrators who organized a solidarity protest against the demolition of Taksim Gezi Park. 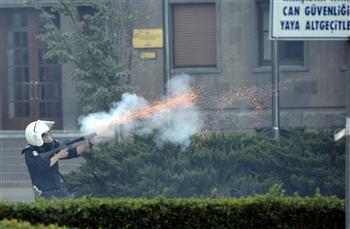 Use of tear gas against peaceful protesters ‘violation of human rights’: Amnesty

Amnesty International has called on the Turkish authorities to immediately halt the brutal police repression, describing the use of tear gas as ‘unacceptable.’

Adding to the long list of architectural and ecological insults to Turkey?s cities and natural areas, we can add one of the last green areas in central Istanbul, a park in Taksim that the government is intent upon tearing down, tree by tree, and replacing with yet another trashy mall built in some cartoonish faux version of a historic building. (For numerous examples, see here and under the blog category ?Istanbul?.) The new construction is continuing despite orders to desist by the High Council on Cultural Heritage, upheld today by an Istanbul court. PM Erdogan responded that he ?refuses the refusal?. 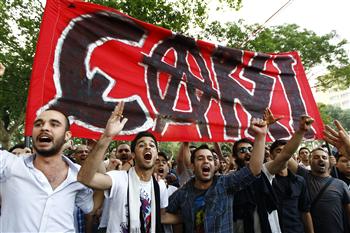 The irreconcilable fans of Galatasaray, Fenerbahçe and Beşiktaş protested in unison.

The head of the Union of Turkish Bar Associations urged President Gül to defuse the situation.

It started as a rather modest protest by some 50 people a few days ago against the government decision to convert the ?Gezi? (promenade) Park.

A veteran photojournalist of daily Hürriyet has been injured in the police?s raid against protesters in the afternoon.

Protests in Turkey are expected to continue after police clashed with thousands of demonstrators occupying a park in central Istanbul.

The resistance that Taksim Gezi Park protestors initiated spread across Turkey. Police attacks and detentions have been reported from Ankara, İzmir and Eskişehir. People are out in the streets.

In Tophane, a district of Istanbul that has previously seen fights between residents and newcomers opening art galleries and gentrifying the area. Residents chant ?Recep Tayyip Erdogan?.