The IMF today released its latest World Economic Outlook forecasts. As usual the forecasts are not overly different from the previous ones – published in October last year – but there are a few interesting points. 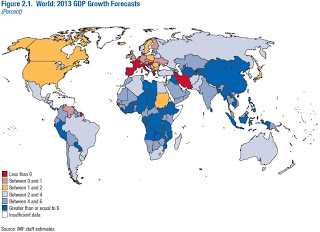 The EU gave Serbia a last chance to clinch membership talks with the bloc, summoning to new negotiations on ending the ethnic partition of Kosovo.

Today?s Conservatism lacks the bite conferred on the Thatcherites when their party and country seemed on the ropes, says Richard Vinen

Europe is no longer Spain?s solution

As the country?s economic woes continue, its people are losing faith in national and European institutions, writes Gideon Rachman

Radical artist Peter Kennard was a chief satirist of Thatcher during her era. On the day of her funeral, we revisit some of the images that captured the Iron Lady and her demons.

Aufstand im Bundestag: Who are Germany’s most rebellious MPs?

On Thursday, the German Bundestag is expected to vote on the Cypriot bailout. The package is likely to be approved with a clear majority – the opposition SPD and Greens will mostly back it. In addition, the symbolically hugely important “chancellor’s majority” – the threshold for the government to get an absolute majority with only the votes of its own MPs – is likely to be reached as well. Only around 12 MPs from the coalition parties (CDU, CSU, FDP) are likely to vote against. This is not particularly surprising. Remember, the bill for this rescue package was largely passed on to Cypriot depositors, and therefore enjoys much greater support in Germany.

At the start of the month the European Citizens’ Initiative (ECI) turned one year old. The Commission hasclaimed it a success – Commissioner Maro? ?ef?ovi? noted that:

Hungary backtracks in row with EU

Hungary moves to defuse a row with the EU over constitutional changes seen by some European politicians as a threat to Hungarians’ human rights.

Parliament appears to be on course to give swift approval to a ?10bn international bailout

Pier Luigi Bersani, leader of the Democrats, and Silvio Berlusconi, the centre-right leader, are due to meet again to pursue talks over a joint candidate

How different is Greece? The beginning of wisdom about the current Greek crisis is to recognize that it is fundamentally political, and that it has been long in the making. Greece?s failure is the outcome of a long process during which populism prevailed over liberalism and became hegemonic in society.

Could Fidesz be expelled from the European People’s Party?

Der Standard reported yesterday on a dinner of leading members of the EPP, including Joseph Daul and Commissioner Viviane Reding, to consider whether the ruling party in Hungary, Fidesz, should be expelled from the party: