The conditionality of EU accession has collapsed: Kemal Derviş

from Hurriyet Daily News
The terms of the European Union?s discussions with Turkey need to be reformed, according to Turkey?s former Economy Minister Kemal Derviş, who said the ‘conditionality of accession has collapsed.’

France-Turkey: The Night Will End – OpEd

The Armenian claims have been discussed in the French Parliament since 1975 (rejected in 1975, 1985, 1987 and 1996, adopted in 1998-2001), but clearly, the discussions and the vote never became so far. What has happened since December could appropriately be called a culmination of stupidity. One senator, Sophie Joissains (UMP), elected from Bouches-du-Rhône, the county with the most vituperative Armenian community of France, even regretted in her statement that the Treaty of Sèvres was never carried out. On the other hand, if in the National Assembly chairman of the Franco-Turkish Friendship group Michel Diefenbacher was a bit alone in maintaining honor by his good speech delivered against the Boyer bill, a significant number of MPs fought the text fiercely in the Senate, accumulating motions of dismissal, amendments of cancellation and speeches to defend their position. 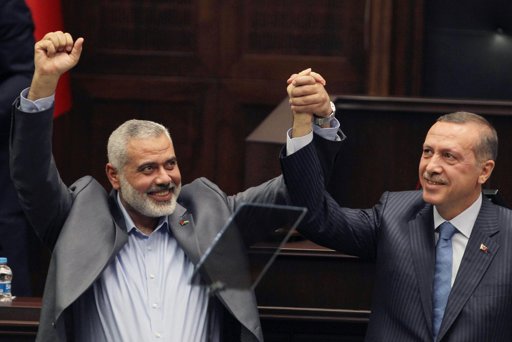 FILE – In this Jan. 3, 2012 file photo, Turkey’s Prime Minister Recep Tayyip Erdogan, right, and the Gaza Strip’s Hamas premier Ismail Haniyeh salute together the lawmakers and supporters of Erdogan’s Islamic-rooted Justice and Development Party at the Parliament in Ankara, Turkey, Ties between Turkey, NATO’s biggest Muslim member, and Hamas, the Islamic militant group that says Israel should not exist, are blossoming. Last month, the Hamas premier visited the Turkish prime minister at his Istanbul home. Today, Turkish and Palestinian flags fly side by side at a building site in the Hamas-controlled Gaza Strip. (AP Photo/File)

Turks Lash Out at France Over Genocide Bill

by By SEBNEM ARSU and SCOTT SAYARE
The Turkish government and press accused France of racism and said that the bill criminalizing the denial of officially recognized genocides is a breach of France?s free speech principles.

from Hurriyet Daily News
Generally speaking the Turkish media was in a joyous mood yesterday, following a motion by a group of French legislators to annul

from Hurriyet Daily News
More than 70 percent of people in the Middle East think Turkey should play a greater role in the region, according to a recent survey conducted by the Turkish Economic and Social Studies Foundation (TESEV).