from Hurriyet Daily News
A group of French senators said Tuesday they had asked the country’s constitutional council to block a new law that bans and punishes denial of the Armenian claims of genocide.

The Perils of Playing Politics With History

by By ALAN COWELL
In recent days, history has tugged at national debates across Europe, raising a question: what risks do politicians court by evoking the chimera of the past to score points in the present?

by By SCOTT SAYARE and SEBNEM ARSU; SCOTT SAYARE REPORTED FROM PARIS, and SEBNEM ARSU FROM MARSEILLE, FRANCE.
The bill criminalizes the denial of officially recognized genocides, including the Armenian genocide begun in 1915 ? an event whose public affirmation in Turkey is treated as a crime.

from Hurriyet Daily News
Much has been said about the law enacted in France criminalizing denial of the Armenian genocide. The best comment, however, came from the Armenian side. 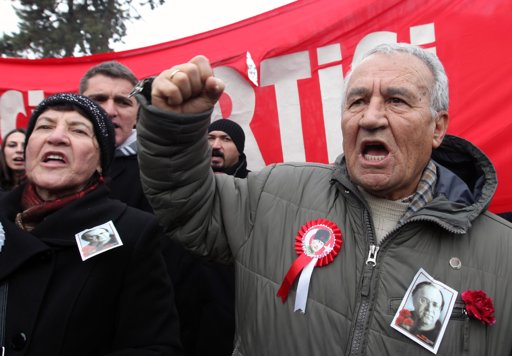 Members of Turkey’s Labor Party shout slogans as they gather outside French Embassy for a protest against France in Ankara, Turkey, Jan. 24, 2012. French Senate voted to make it a crime in France to deny that the killing of Armenians in the Ottoman Empire nearly a century ago was a genocide, but Turkey sees the allegations of genocide as a threat to its national honor and may prompt retaliatory sanctions from Turkey, complicating their already delicate relationship.(AP Photo/Burhan Ozbilici)

from Today’s Zaman, your gateway to Turkish daily news :: Columnists by YAVUZ BAYDAR
The French Senate?s passing of the bill which criminalizes the denial of the mass deportations and massacres of the Ottoman Armenians in 1915 is simply an act of folly.

from Hurriyet Daily News
Prominent philosopher Slavoj Zizek advised Turkey to ?apologize for the horrible things happened in 1915? in an ironic way by saying ?this was part of us becoming a modern European nation state.?

from Hurriyet Daily News
The recent disputes between Ankara and Paris put growing mutual trade and investments under risk. French investments in Turkey that vary from retail businesses to industries may be affected, professionals say

from Hurriyet Daily News
Ankara has begun a wait-and-see game with Paris, dismissing its approval of the Armenian ?genocide? denial bill but pinning hopes on French court counteraction

from Blogactiv by conorbjorn
With the final results from Egypt?s six week parliamentary elections tricking in, all talk is about the strong election performance of the two main Islamic parties. With 43.7% of the vote, the Freedom and Justice Party (the political wing of the Muslim Brotherhood) was the clear winner, although the ultra-conservative Nour party surprised many by taking home 22%.

from World news: Turkey | guardian.co.uk
Abdullah Gul voices disappointment at passing of a bill by French senators making the denial of the mass killing of Armenians by Ottoman Turks almost a century ago illegal

Turkey at a crossroads

from Hurriyet Daily News
Why, despite all Turkish warnings of reprisals, did the Nicolas Sarkozy administration go ahead and adopt the so-called ‘genocide denial bill?’

The U.S. Department of of State announced today the launch of its Turkish-language Twitter account @ABDTurk, joining the Department?s 10 official feeds in Arabic, Chinese, English, Farsi, French, Hindi, Portuguese, Russian, Spanish, and Urdu. These social media accounts serve as a conduit for the U.S. Department of State to inform and engage publics around the world on foreign policy issues.

by Acturca
Caucasus Analytical Digest, No. 30, 28 October 2011, p. 5-7 No 30: Emerging Regional Powers: Turkey and Iran in the South Caucasus By Nigar Göksel *, Istanbul In recent years, Turkey has sought to diversify its foreign policy away from the West to focus more on neighboring regions by becoming a regional economic power, energy […]

US envoy to Turkey: Face ghosts of the past

from Hurriyet Daily News
Hinting at France?s recent genocide bill, the US envoy to Ankara tells Turkey that it must confront its past if it wants to rank among the top economies by 2023

Egypt can?t replicate the Turkish model: but it can learn from it

by Acturca
Sada (Carnegie Endowment for International Peace) January 12, 2012 By Şebnem Gümüşçü * In Egypt, a number of younger and more moderate Islamists have pointed to Turkey?s ruling Justice and Development Party (AKP) as a source of inspiration, citing legal reform, successful economic management, and electoral victories as models to be emulated. In some policy […]

Tiger Turkey at the crossroads

by Acturca
The Independent (UK) Saturday, 28 January 2012, p. 30-31 By Patrick Cockburn in Istanbul The country is one of success stories of the last decade, but is its increasingly autocratic government slowly threatening progress? In the tea houses of Istanbul the mood is generally optimistic as customers listen to the news of the European economic

Bulgaria, Turks and the politics of apology

by Acturca
Al Jazeera, 26 Jan 2012 Julian Popov *, London, United Kingdom During Bulgaria?s ?Restoration of Names? process, nearly one million ethnic Turks were humiliated, says author. In 1989, under the last Communist government, nearly five per cent of the population in Bulgaria left the country as a result of the forced ethnic assimilation policy for