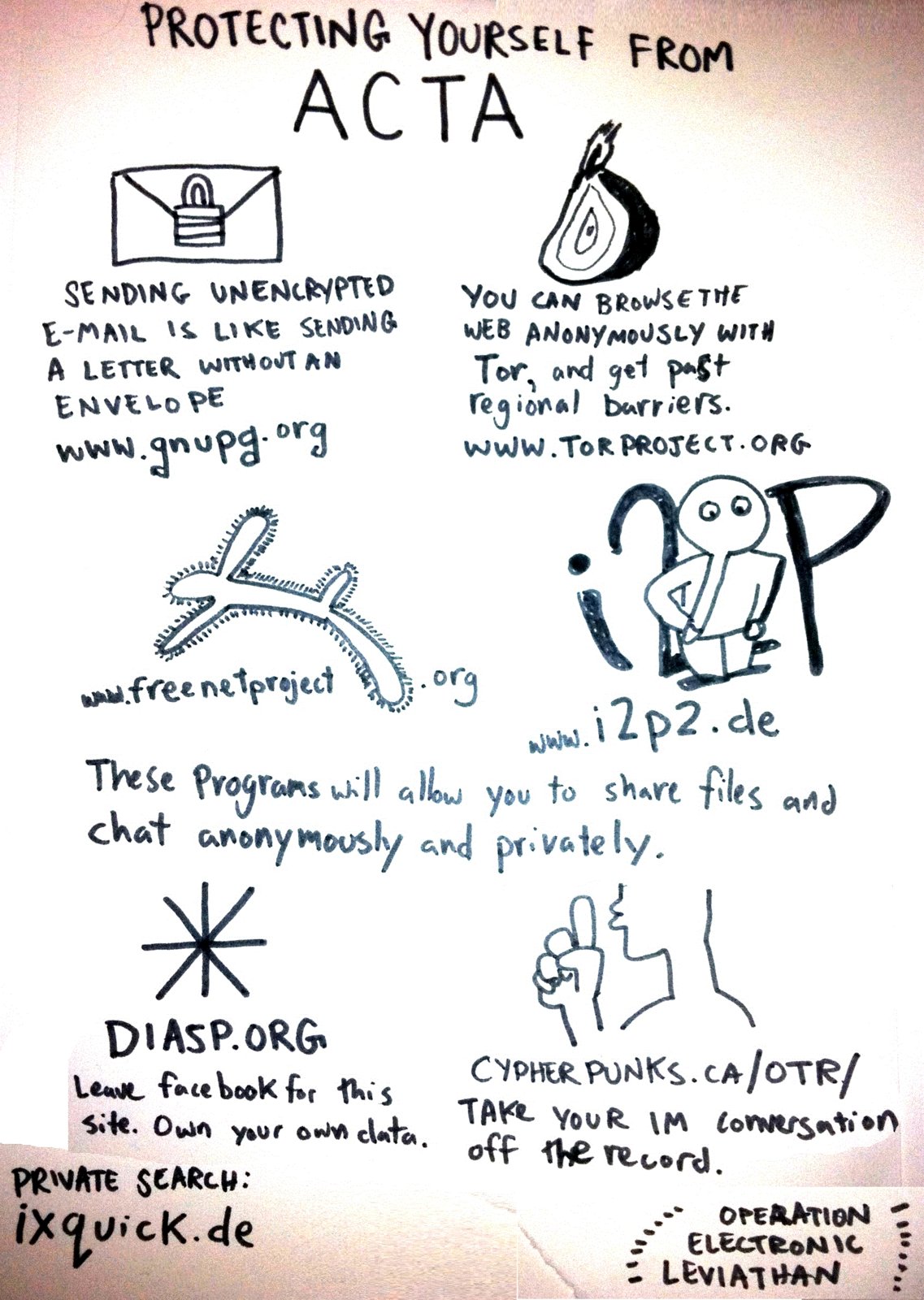 ACTA ?Is More Dangerous Than SOPA?

SOPA and PIPA are stalled (or dead) in the halls of the U.S. Congress. Yet, there may be a bigger, perhaps more dangerous threat to Internet freedoms on the way, called the Anti-Counterfeiting Trade Agreement, or ACTA. At least that?s how U.S. Rep. Darrell Issa, R. ? Calif., sees it, telling an audience, ?As a member of Congress, it?s more dangerous than SOPA. It?s not coming to me for a vote. It purports that it does not change existing laws. But once implemented, it creates a whole new enforcement system and will virtually tie the hands of Congress to undo it.?

We Have Every Right to Be Furious About ACTA

from EFF.org Updates by parker
If there?s one thing that encapsulates what?s wrong with the way government functions today, ACTA is it. You wouldn?t know it from the name, but the Anti-Counterfeiting Trade Agreement is a plurilateral agreement designed to broaden and extend existing intellectual property (IP) enforcement laws to the Internet. While it was only negotiated between a few countries,1 it has global consequences. First because it will create new rules for the Internet, and second, because its standards will be applied to other countries through the U.S.?s annual Special 301 process. Negotiated in secret, ACTA bypassed checks and balances of existing international IP norm-setting bodies, without any meaningful input from national parliaments, policymakers, or their citizens. Worse still, the agreement creates a new global institution, an “ACTA Committee” to oversee its implementation and interpretation that will be made up of unelected members with no legal obligation to be transparent in their proceedings. Both in substance and in process, ACTA embodies an outdated top-down, arbitrary approach to government that is out of step with modern notions of participatory democracy.

What is ACTA? Why Should You Care?

by Grahnlaw
Here they are, in all their glory, the 22 language versions of ACTA, the Anti-Counterfeiting Trade Agreement. But, as we soon find out, the European Union and its Member States, Australia, Canada, Japan, the Republic of Korea, the United Mexican States, the Kingdom of Morocco, New Zealand, the Republic of Singapore, the Swiss Confederation and the United States of America did not limit their ambitions to anti-counterfeiting.

from Bloggingportal.eu – Today’s posts
?ACTA changes nothing? has become the favorite mantra of those who want to push the agreement through at any cost. This in itself is of course a strong signal that there is something very suspect about the whole issue. If ACTA really chan

by Cory Doctorow
Kader Arif, the EU “rapporteur” for ACTA (a copyright treaty negotiated in secret, which contains all the worst elements of SOPA, and which is coming to a vote in the EU) has turned in his report and resigned from his job, delivering a scathing rebuke to the EU negotiators and parliamentarians, and the global corporations who are pushing this through:

by Cory Doctorow
The streets of Poland have erupted in protest on the eve of the country’s signing onto ACTA, the secretive copyright treaty that is being rammed through many European Parliaments this year. Members of Parliament showed up for work wearing Anon-style Guy Fawkes masks to show their disapproval.

by Grahnlaw
The Anti-Counterfeiting (and much else) Trade Agreement #ACTA is a hot subject on Twitter and the online public sphere in general. Different campaigns aim at defeating the treaty. A short while ago @Avaaz had reached 963,079 online signatures on a global petition for the European Parliament to reject the treaty negotiated between the European Union and the governments of a number of states. (Thousands were added during the writing of this blog entry.)

Is ACTA the new SOPA?

The Stream’s online community sends in their comments and questions on the Anti-Counterfeiting Trade Agreement, or ACTA. To see which responses make it on air, tune into our live show on Monday, January 30 at 19:30 GMT: http://stream.aljazeera.com/
http://storify.com/ajstream/acta-questions-and-comments