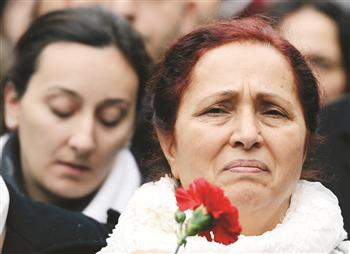 Traders reacted to concerns that Argentina, Turkey, South Africa among others might be on the brink of currency crises

A series of political scandals and accusations of mismanagement in some of the world’s major developing economies triggered turmoil on international stock exchanges on Friday.

Turkey’s Deputy Prime Minister Ali Babacan said the lira’s tumble on Friday was a “re-pricing process” due to recent political turmoil as well as the U.S. Federal Reserve‘s plan to gradually

Turkey’s Prime Minister Recep Tayyip Erdo?an is firing judges, sacking policemen and raising concerns about the fragility of the country’s democracy according to diplomats and academics

Freedom and rights in Turkey declining, US think tank says

US think tank Freedom House criticizes Turkey, saying the freedoms and human rights are on the decline in the country. The report focuses on heavy use of police force

Erdogan Still Cares About The EU. But How Long Will Obama Keep Silence?

Following his visit to Brussels, Prime Minister Recep Tayyip Erdogan agreed “to freeze” the controversial bill that would virtually end separation of powers in Turkey

PM Erdoğan hopes he has now convinced European officials about the existence of a ?’parallel structure’

What does Erdoğan?s ?reassurance? to the EU mean?

The first thing to be said about Prime Minister Recep Tayyip Erdoğan?s talks in Brussels on Tuesday is that it was good to see no tension emerge from the meetings.

Syria warring sides not in same room for start of talks: UN

UN mediator Brahimi will first meet with the Syrian government delegation and then the opposition as the process is being ‘shaped at the moment,’ a UN spokeperson says

After three years of civil war in Syria, peace talks began today, Wednesday, inMontreux. For the first time representatives of the government and opposition are meeting for direct negotiations. The conference is overshadowed by new allegations of torture against Assad’s regime. Commentators hold out little hope for the conference and call on the EU to take in more refugees from Syria.