ANKARA, Turkey (AP) – Turkey’s embattled prime minister on Saturday ratcheted up the rhetoric against a U.S.-based Muslim cleric seen as a threat to his government, for the first time directly suggesting followers have infiltrated the police and judiciary and are pushing a corruption probe against his allies.

He argues that he has been targeted by the Cemaat and fell victim to a plot by its members in the police and the judiciary, who have tied him to the infamous Ergenekon case, where military officers, intellectuals and other civilians have been convicted

The end of ‘unshakable’ AKP myth

For the last couple of days, the codes and rules, which have been turned upside-down by Turkey?s ruling Justice and Development Party (AKP), have become hard to keep up with since the AKP was forced to fight a self-created ?monster.

Turkey: up from the depths | Editorial

The “deep state” burst up from the depths in Turkey this week, threatening not only Prime Minister Recep Tayyip Erdogan’s hold on power but the country’s hard-won reputation as a modern society. The idea that, behind the facade of apparently normal institutions, shadowy forces are at work, contesting one another and undermining the proper process of government, is part of politics in many places. But this is especially so in Turkey where, since Ottoman times, conspiracies and secret or semi-secret networks, real or imagined, have played an important role.

A police-judiciary joint operation and politics

Allegations of corruption and the impact of these allegations on the political scene are at the top of the agenda in Turkey. And it seems they will stay there for a while

The appointment of Efkan Ala as the new interior minister has been widely considered as the most evident signal reflecting PM Erdoğan?s resolve to play it tough

Erdoganists, Gulenists and The Gezi Youth

Like during the Gezi Park protests last June, the international interest to Turkish news is huge nowadays. Today, I was hosted at Al Jazeera America‘s studio in Istanbul, wrote an op-ed for Yedioth Ahronoth and gave a telephone interview to Danish TV2.

Their main question was same: Can the anti-corruption protests against the government change anything in Turkey?

A Turkish prosecutor accused police of obstructing his pursuit of a high-level graft case on Thursday as the prime minister Tayyip Erdogan’s government weathered a storm of allegations of corruption and cronyism. 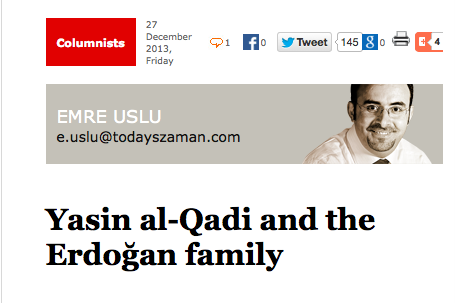 Turkey: Erdogan under new pressure to quit as protesters take to the streets

In scenes reminiscent of this summer’s massive anti-government revolts, hundreds of people took to the streets in cities across Turkey on Friday night calling for the government to resign following a high-profile corruption scandal that involves sons of cabinet ministers, leading businessmen and the head of a state-owned bank.