Opposition leader Yulia Tymoshenko began a hunger strike on Monday in a bid to have theassociation agreement signed. Meanwhile tens of thousands continue to demonstrate for the country to strengthen its ties with the EU. The Ukrainians still believe in the European dream, commentators write, calling on the EU’s leaders to start a dialogue with Moscow. 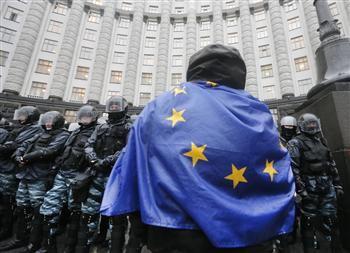 Tymoshenko goes on hunger strike in support of pro-EU protests

Tymoshenko went on a hunger strike Tuesday in solidarity with thousands of pro-European protesters outraged with the ex-Soviet state’s shock decision to scrap a key EU pact.

Marian Kotleba, a far-right politician notorious for his anti-Roma rhetoric and appearances in a Nazi-style uniform, has won the local election in the Banská Bystrica region of Slovakia by 55.5%, sending a shockwave to the political class ahead of the European elections.

Kotleba has a range of controversial views: he considers NATO a terrorist organisation; he has been arrested for hate speech against the country’s large and impoverished Roma minority; and he has in the past denied the Holocaust.

Leaked EU report on US spying: the excerpts 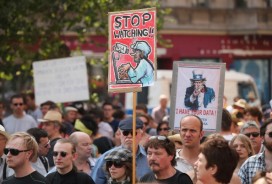 Demonstrators in Berlin protest against alleged US spying activities in July.

In today?s dead-tree edition of the FT, we report on a draft of a stinging report the European Commission will issue Wednesday which could send shock waves through the US tech industry: unless the Obama administration changes the way it handles online data of European citizens, American companies like Google and Facebook will have to find another way to do business in the EU.

Bringing the Iran Deal Back Home

The recent interim agreement on Iran’s nuclear program has shown, once again, that the political space for any meaningful diplomatic agreement ? both the desire for a deal and the room to achieve it ? is created at home. And, for both America and Iran, the domestic space needed for further progress cannot be taken for granted.

There is a Roma problem in Europe, and it is getting worse. But both the problem and its worsening reflect a toxic combination of deep-seated hostility and persistent neglect that Europe can no longer afford.

The SNP has today published its White Paper on an independent Scotland. Amongst its other analysis it sets out a strategy towards the EU. It has always been clear that if Scotland votes for independence there will need to be a negotiation with the rest of the UK on the terms for divorce, but it is now clear the SNP have an EU negotiating agenda too. Here are the main points: