Commission floats ?ideas? to deepen the EU?s social side

Social policy indicators such as unemployment could soon form part of the European Commission?s regular monitoring of EU countries? economic and budgetary imbalances under plans floated by Brussels today to deepen the social dimension of the Economic and Monetary Union (EMU).

Presenting the proposal on Wednesday (2 October), Commission President José Manuel Barroso said the EU had made ?giant leaps forward? to strengthen scrutiny of national public deficits during the eurozone debt crisis but that these breakthroughs had yet to be matched on the social policy side

While analysts have predicted Greece will require more aid, albeit on a smaller scale than previous bailouts totalling about ?240 billion, the troubled country has vowed frugally to spend less than ?50 million during its upcoming EU presidency.

“We will spend much less than we spent in previous presidencies,” a Greek official told reporters in Brussels yesterday (1 October).

As the European Commission is about to present proposals to strengthen the “social dimension of the economic and monetary union”, a new poll shows that up to 60% of Europeans believe there are better ways of solving the economic crisis than austerity.

The results of the survey, released by pollster firm Gallup this morning (2 October), confirms that public opinion rejects the idea that the only way of fighting the crisis is by cutting costs.

Eurozone recovery: The world is not enough

The end of the eurozone?s long recession has been met with relief by its policy-makers, with some jumping on the news to justify their management of the eurozone crisis. They argue that the eurozone economy is on the mend, and the recovery will gain momentum over the coming quarter. If they are right, then the outlook for the euro has indeed improved: faster growth will make it easier for countries to service their debt, bring down unemployment and help contain political populism. Unfortunately, their optimism is almost certainly misplaced. The basic problem is that the world cannot accommodate a Europe refashioned in Germany?s image.

Austrian Elections: Think twice before calling it a ‘shift to the right’

The Austrian national elections on 29 September do not show a shift towards right-wing nationalism merely because the far-right Freedom Party (FPÖ) became the third strongest party, writes Herbert Vytiska.

Herbert Vytiska was an advisor to  the former Austrian foreign minister Alois Mock.

At the last minute ? thanks to 535,000 postal votes not counted until late Monday night ? election results on Sunday for the Austrian National Council confirmed a continuation for the two-thirds majority consisting of the Social Democratic Party of Austria (SPÖ), 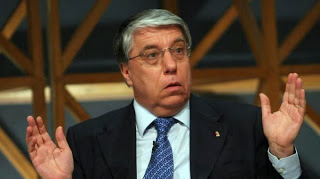 As we argued in our post yesterday, it was “not unrealistic” for Italian Prime Minister Enrico Letta to win tomorrow’s vote of confidence in the Italian Senate, even if, on paper, he didn’t have the numbers to do so.

Norway urges EU to spell out its long-term energy goals

Business leaders from Norway?s energy sector urged Europeans to spell out their climate and energy goals, saying clearer policy objectives could provide a basis for the Scandinavian country to act as a stabiliser for the EU energy market.

European energy policies have a profound impact on Norwegian businesses even though the country does not belong to the European Union, according to Tore Ulstein, president of the Confederation of Norwegian Entreprises (NHO).

Barroso: EU would be ridiculed if US shutdown occurred here

Commission President José Manuel Barroso said that while the EU was “ridiculed” for its handling of the eurozone crisis he would not criticise the United States for its budget deadlock, as this was a “normal” result of democracy.

The United States government fell into a partial shutdown at midnight on 1 October after Republican and Democrat leaders failed to strike a deal over the budget. Markets largely ignored the deadlock but economists have said it would most likely have a broader impact if it last for more than a few days, and could potentially drag further down an economic recovery that has had struggled to gain traction.

Italian Prime Minister Enrico Letta won a confidence vote in parliament on Wednesday (2 October) after Silvio Berlusconi, facing revolt in his own centre-right party, backtracked on threats to bring down the government.

As dozens of centre-right senators prepared to defy their media magnate leader and salvage the left-right coalition led by Letta, Berlusconi staged an abrupt U-turn and said he too would back the centre-left prime minister, just days after he sparked the crisis by pulling his ministers out of Letta’s cabinet.