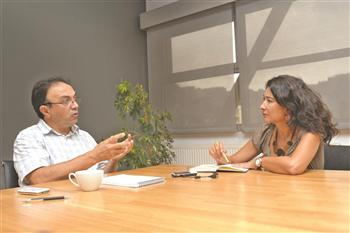 Following an overwhelming electoral victory that gave Angela Merkel the mandate to rule Germany for the third time, not much is expected to change in Turkish-EU relations

US concerned about Turkey’s choice of Chinese missile system

How Turkey blew its chance to lead this troubled region

The Independent on Sunday (UK) 29 September 2013, p. 37 Patrick Cockburn The country could have enhanced its influence and saved a lot of lives. It did the exact opposite Whatever happened to the idea that Turkey was the coming power in the Middle East, with its surging economy and stable democracy under a mildly

France, Britain and China to be in Syria peace talks: Fabius

Britain, France and China will be involved in a peace conference on Syria due in Geneva in November, French Foreign Minister Laurent Fabius said Monday.

The U.S. president confirms a historic first direct communication with Iran’s leader since 1979

Turkey ploughs own furrow as Mideast and EU ties worsen

Financial Times (UK) 27 September 2013, p. 4 By Daniel Dombey in Istanbul For years, the overarching question about Turkey was whether the country would become more at home in the Middle East or instead continue its decades-long journey towards European standards. Now an answer has come closer into view: neither of the above. Relations

The U.N. Security Council adopted a resolution that demands the eradication of Syria’s chemical weapons, ending weeks of intense diplomacy

The U.S. president hailed a U.N. resolution on Syria as ‘a huge victory’ for the world

The Road on from Damascus: What the Syria Deal Means for the U.S. and Russia

The deal the United States and Russia struck to get rid of Syria’s chemical weaponry is neither a sign of a sea change in relations nor a victory for one party over the other, writes Olga Oliker. It is, however, something of a testament to diplomacy on both sides.

Turkey may be forced to ?standalone? air defenses