Chancellor Angela Merkel is triumphant but must now form a new ruling coalition, with the Social Democrats (SPD) seen as likely partners.

As focus shifts to German coalition negotiations, who are the key players to watch? 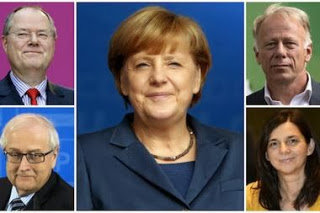 After a surprisingly manic election night the focus in Germany now shifts to the tricky task of forming a government. As we noted yesterday, many options remain possible. Merkel looks unlikely to gain a majority on her own while the FDP and AfD are certainly out of the Bundestag.

Analysts say it would be wrong to expect a bold leap forward in the German leader’s euro zone strategy, even if Angela Merkel?s CDU/CSU does end up, as expected, in a coalition with the staunchly pro-European Social Democrats (SPD), giving her a dominant majority in parliament.

Merkel has emerged from Sunday?s German election with the closest thing to a governing mandate since Helmut Kohl rode to victory in 1990 on the feel-good wave of reunification.

Angela Merkel scored a clear victory in Germany’s parliamentary elections on Sunday. The conservative CDU and its sister party the CSU came just short of an absolute majority. Commentators expect Germany’s influence in Europe to grow and urge the chancellor to use her new leeway to push for reforms in Europe as well as at home.

Will homophobia rain off Serbia’s parade?

Gay pride week begins September 21, but it is unclear whether the Serbian government is willing to expend the political capital to secure it, despite external pressure.

The European Commission has succumbed to heavy lobbying from the electric heating industry and is set to approve an energy labelling scheme that misrepresents its appliances’ true efficiency performance, according to environmental and consumers groups.

Around 20 million gas and electric heaters are sold in Europe each year and from 2016, the Commission wanted them to display colour-coded energy performance labels, which have bars ranging from a green ?A? to a red ?G? class.

But electric heater manufacturers ? which make up over 80% of the market – fought against any direct comparison with gas and other heaters, most of which are more than twice as efficient.

Skopje and Athens are ?brothers in crime? on Macedonia name dispute

The stalemate on the Macedonia name dispute between Athens and Skopje is a ?lose-lose game?, and the two governments are ?brothers in crime” on the issue, says Radmila ?ekerinska, vice president of the opposition Social Democratic Union of Macedonia. EurActiv Greece reports.

Russia?s response to Ukraine?s European choice: what is next?

Great hope remains that after the Vilnius Summit in November, Brussels will keep its word and will not leave Ukraine one on one with Russia, whose president, Vladimir Putin, will aspire for geopolitical revenge and a return of Kyiv to the Eurasian area at any price, writes Roman Rukomeda.

What Merkel?s Victory Means for Europe

With Sunday’s victory Angela Merkel now has the chance for a fresh start on Europe. Whatever coalition emerges following the election, the chancellor shouldn?t squander her victory, writes Judy Dempsey.

Judy Dempsey is a nonresident senior associate at Carnegie Europe and editor in chief of Strategic Europe.

More Of The Same From Germany Or New Directions For Europe After Merkel Triumph?

1)  Angela Merkel is as utterly triumphant as any European political leader has been in recent years. Unlike Tony Blair in 2005 or Margaret Thatcher in 1987 when both leaders won a third victory but on a smaller vote her third election victory has seen her win an extra 3.5 million votes.  Even so the CDU/CSU total share of the vote is lower than the combined Union vote won between 1949 and 1994. And as with Thatcher in 1987 or Blair in 2005 it is a third time win for Mrs Merkel but will it be the last time?  Voters love her don?t rock the boat, continuity, no change style. Like the do-not-much British Conservative prime minister, Arthur Balfour, a century ago Mrs Merkel believes that ?Nothing matters very much and most things don?t matter at all.? Like early 20th century England, early 21st century Germany is rich, ordered, well-run, socially one of the fairest EU member states, confident in its democracy, freedoms and rule of law and not a little self-satisfied. Why buy new shoes when the ones you have are comfortable, water-proof and look OK?

Moscow?s recent overtures to Ukraine and Armenia concerning membership of  the Russia-led Customs Union have been heavy on threats and hard-ball politics, and rather short on attempts at actually explaining the benefits of joining the Union instead of pursuing European Union integration. Which offer is best, asks Luke Rodehaffer

Frau Merkel won big in Germany?s federal eelctions on Sunday, but not big enough; and that has negative implications for German energy policy, among other things. 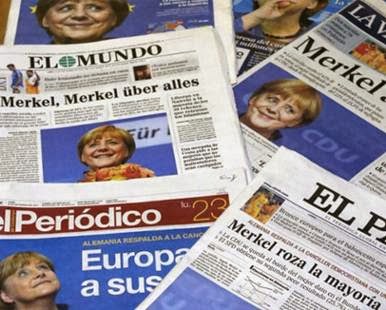 Mixed Reaction in the Med

Spanish daily El Mundo runs with the headline ?Merkel, Merkel über alles?, while an article in the paper argues that a Grand Coalition (composed of Merkel’s CDU/CSU and the centre-left SPD) ?would lead, to a certain extent, to a relaxation of the austerity Merkel imposes on Europe.?

The Germans who went to the polls Sunday were, by and large, a contented lot. Two-thirds of them felt that their prosperous country was ?well? prepared for the future, according to a leading exit poll. Four out of five believe ? accurately, according to all the economic statistics ? that they are better off than their neighbors in Western Europe.

In a referendum on Sunday, 65.4 per cent of voters in Switzerland?s Italian-speaking canton of Ticino vote to ban the wearing of full-face veils

The German elections have propelled the firebrand social democrat Martin Schulz, the present European Parliament President, into pole position to be the Party of European Socialists candidate to succeed to José Manuel Barroso as Commission President, EurActiv has learned.

A possible ?Grand Coalition? agreement between the German social-democrats and the centre right CDU/CSU would include the nomination of Schulz for German Commissioner, a leading social democrat (SPD) German MEP told EurActiv.

?If we get a grand coalition, the SPD will want to have the next Commissioner for Germany. That could be Martin Schulz if our political family finds a majority to select him as candidate for European Commission president,? MEP Jo Leinen told EurActiv in a phone interview last night.

Swedish police have confirmed that they have kept an illegal registry of more than 4,000 Roma people living in Sweden.

The newspaper Dagens Nyheter, which broke the news, says Swedish police hold 4,029 names of Roma people living across the country.

Farmers could miss out on huge EU payments if ministers and parliamentarians fail to complete the last set of negotiations for Europe?s new agriculture policy today (24 September).

Ministers and a delegation from the European Parliament will attempt to smooth out legal issues during the last round of negotiations over the EU’s reform of the Common Agricultural Policy (CAP).