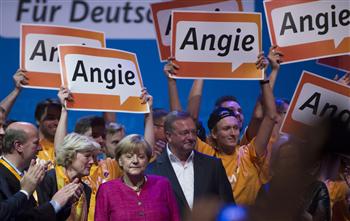 Will Germany’s Pirates be walking the plank?

Despite recent successes, and timeliness of internet privacy issues, life’s not all plain sailing for the Pirate Party.

Around 800,000 Turks are expected to cast in their votes in the Sept. 22 elections in Germany, with a majority likely to vote for the Social Democratic Party (SPD)

Al Jazeera talks to Germans as they head to the ballot box.

Earlier this week, Russia?s children?s ombudsman Pavel Astakhov argued that in order to protect innocent children from corruption, sex education should not be taught in schools. Instead, young Russians should look to the classics, where they?ll learn all that they need to about love and relationships, chastity and family values. An overview of sex education in some classic European literature

Germany?s coalition dance could end in an unhappy affair

If the FDP does not get 5 per cent of the vote in Sunday?s German election everything is pointing to a pas de deux between the CDU-CSU and the SPD

Europe is awaiting Germany’s parliamentary election on Sunday with bated breath. Either the confirmation of the present coalition between the conservative CDU/CSU and the liberal FDP or a grand coalition are seen as the most likely outcome. However, the results will hardly change Berlin’s Europe policy, commentators say, criticising the extent of Germany’s power on the continent.

New values for One Nation Labour

It was values, not aiming at the ‘centre ground’, that won New Labour power in Britain. If Miliband and One Nation Labour are to prosper they need to show a values-based approach that resonates with an increasingly fragmented public. But how?

Senior European Union officials told Israel to explain why its soldiers seized a truckload of humanitarian aid intended for Palestinians, saying they deplored the confiscation.

Our Nina Schick wrote this op-ed for today’s City AM:

For a vote touted as decisive to the future of the Eurozone, the German election campaign ? which reaches its climax on Sunday ? has been lacklustre. With barely any talk of Europe, it?s been defined by domestic issues ? from data protection, to rent control and taxation.

Greeks are carefully watching Germany’s election hoping a new government in Berlin will forgive some of its debt.