The Swarm Economy Is Not Silicon Valley?s ?Sharing Economy?

Swarm Economy ? Zacqary Adam Green:?When we talk about the end of workplaces and lifetime employment, please don?t get the wrong idea. This has nothing to do with what Silicon Valley and venture capitalists are now calling the ?sharing economy.? It was once the darling of open source advocates and socially-conscious entrepreneurs, but I now consider the term ?sharing economy? to be co-opted by predatory business models. Here?s how it happened. 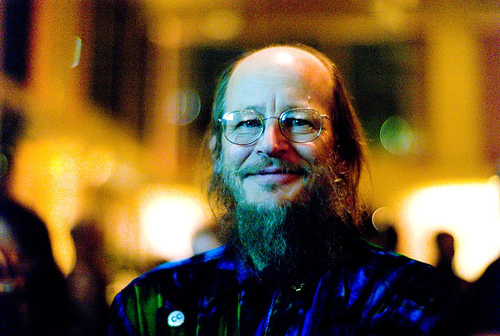 On the Cryptography mailing list, John Gilmore (co-founder of pioneering ISP The Little Garden and the Electronic Frontier Foundation; early Sun employee; cypherpunk; significant contributor to GNU/Linux and its crypto suite; and all-round Internet superhero)describes his interactions with the NSA and several obvious NSA stooges on the IPSEC standardization working groups at the Internet Engineering Task Force.

Bleeding Edge: Thomas Pynchon Returns as a Prophet of the Post-Snowden Era

Thomas Pynchon returns with Bleeding Edge, his ninth book and his first to take on the Internet as a major subject.

An NSA training slide leaked by the whistleblower Edward Snowden shows that the agencybroke into computer systems run by Petrobras, Brazil’s state oil company; the President of Brazil; SWIFT, the global payments clearinghouse; and the networks of Google’s Brazilian offices. The slide listed the reason for the intrusions as “economic.” The NSA doesn’t deny it, but says that despite the “economic” nature of their crime, it was not about “stealing trade secrets” but rather something to do with terrorism, yadda yadda, blah blah blah.

Google, Yahoo and Facebook urge the US government for permission to release national security requests

New details of the NSA?s capabilities suggest encryption can still be trusted. But more effort is needed to fix problems with how it is used.

Anatomy of a hack: How the SEA took down the NYT and Twitter

The New York Times and Twitter?s UK site went offline for some users on Tuesday as part of an attack that the Syrian Electronic Army took credit for. The SEA is a pro-Syrian leader Bashar al-Assad hacktivist group, but it?s taking a less common route to taking down web sites ? it?s attacking the domain name system. Most public attacks against web sites have been denial-of-service attacks, where

According to a report in Der Spiegel, the NSA has cracked the protection on Android, iOS and Blackberry devices, and can access protected files, including contacts and location history. Slashdot also notes a WashPo report stating that Obama’s justice department had secretly granted permission for the NSA to deliberately spy on Americans’ phone calls, and to retain stored phone calls for extraordinary lengths of time.

The hacking collective known as Anonymous claimed to have launched a cyberattack on the Syrian government and the Saudi Arabian government to punish both sides of the Syrian civil war for atrocities that had been committed. Anonymous said in a .

NSA leaks as a demographic phenomena

Writing in the Financial Times, Bruce Schneier expands on Charlie Stross’s demographic theory of US military/espionage leaks, which holds that the end of the “job-for-life” culture in the spookocracy and the corporate America from which it draws its foot soldiers means the end of the deep loyalty of spooks.