Litany of ifs and buts on Europe?s banks

Privatised justice and the erosion of democracy in the UK

Public service outsourcers G4S and Serco were caught overcharging taxpayers by tens of millions of pounds for tagging and monitoring offenders. What happened next?

The Financial Conduct Authority, which launched in April, has broken publicly with Brussels? formal interpretation of two different rules in the past three months

As many as 100% of businesses on some Greek islands are evading taxes, the news site ?The Greek reporter? wrote.

Greece is enjoying a record-breaking tourist season, but the results of tax inspections so far show that the government is not benefiting, as almost all the money collected in many cases is being kept.

Russia’s bid to bloc Ukraine’s ambitions to move closer to the European Union will be on the agenda of an informal meeting of EU foreign affairs ministers on 6-7 September in Vilnius, diplomats have told EurActiv.

Sweden, Poland and Lithuania, which holds the rotating presidency of the EU,  have put Ukraine on the agenda of a “Gymnich”-type informal meeting of EU foreign ministers.

Norwegians say no to EU membership ahead of general election

Less than 20% of Norwegian voters want their country to join the European Union, according to a poll published ahead of a general election to be held on 9 September.

Seven out of 10 voters say no to Norway’s EU membership, while only 19% think the country should join the union, according to the poll.

The no-voters are found in all parts of the country, among all age groups and educational levels, according to Norwegian media.

The Danish opposition leader Lars Løkke Rasmussen has ratcheted up the pressure on Prime Minister Helle Thorning-Schmidt to launch a referendum on two of Denmark?s EU opt-outs by calling for one at ?at the earliest opportunity?.

Rasmussen, former prime minister and leader of the Liberals, the biggest opposition party, wants Denmark to get rid of its opt-outs on Defence and Justice via a “quick” referendum, possibly in May next year to coincide with the European elections.

Around 5,000 French socialists gathered last week-end in La Rochelle for a self-motivating work “summer camp? to grind their teeth over controversial debates that will enliven next year’s elections campaigns, not least devising a strategy against the far-right.

Unemployment, growth and taxes were again the main focus as the ruling party readies itself for the municipal and European elections, in March and May 2014, respectively. 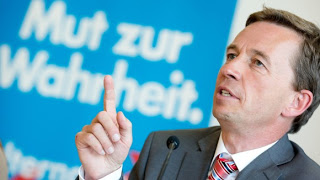 An interesting story caught our eye in today’s Welt concerning next month’s German elections. Bernd Lucke, the head of the anti-euro Alternative für Deutschland party (seemingly undaunted by a recent attempted assault on his person) has written a letter to German President Joachim Gauck asking for access to documents in which the German government has simulated different scenarios to save the euro, citing Germany’s freedom of information laws. The move fits with the party’s theme of “having courage for the truth” (Mut zur Wahrheit), which it accuses other German political parties of lacking.

“Greece: Can It Get Even Worse?” by Ronald Janssen

While the German public opinion, courtesy of the debate in the run up to the next political elections, is discovering the fact that Greece will be needing a third bail out, a team of economists from the US ? based Levy Institute describes how things look like from the side of Greece.