Clashes between Islamist rebel forces and Kurdish fighters spread to a second Syrian province on July 20, activists said, as factional tensions rose in the north of the country.

A group of 150 retired ambassadors and retired consul-generals of the Turkish Foreign Service signed a declaration July 20, which was also supported by seven former Turkish foreign ministers

Dismayed by the Turkish government?s approach to the latest stage of crisis in Egypt, Cairo?s ambassador to Ankara, Abderahman Salaheldin, has still appeared hopeful of cementing ties between the two ?brother? countries

A Turkish parachutist with a Turkish flag flies over a military parade in the Turkish occupied area of the divided capital Nicosia, Cyprus, Saturday, July 20, 2013. The parade was part of the celebrations marking the 39th anniversary of the Turkish invasion and occupation of the northern area of the island. Cyprus was split into Greek Cypriot south and Turkish Cypriot north in 1974 when Turkey invaded in response to a coup by supporters of union with Greece. (AP Photo/Petros Karadjias)

Egypt has no intention of waging Syria ‘jihad’: Foreign minister

Egypt has no intention of a waging a holy war against Syria, but still supports the Syrian peoples‘ hopes for freedom, newly installed foreign minister Nabil Fahmy said

New ministers appointed this week to staff interim government have already been met with criticism and protests.

At least three women were killed in Mansoura when a protest in support of former Egyptian president Mohamed Morsi was attacked by ?thugs? tonight. Dozens of people were also reportedly injured by shotgun and knife wounds.

The military coup deposing Egypt’s first democratically elected president, Mohammed Morsi, has sparked an important shift in the regional balance of power in the Middle East. Morsi’s ouster deals a strong blow to the Turkey-Qatar-Egypt ?pro-change? axis and to Turkey’s hopes of playing a larger role in the region. 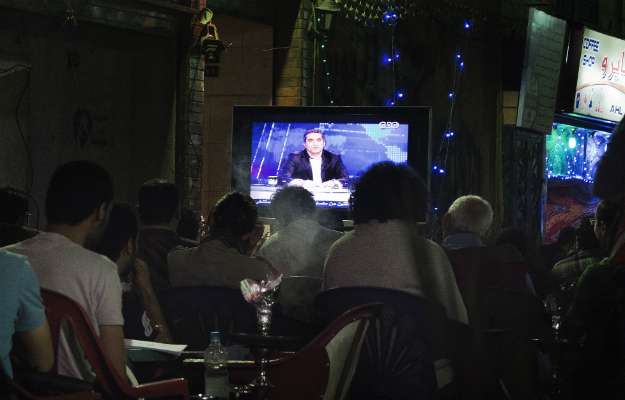 Egypt’s liberals have a powerful, outspoken new critic, and he’s one of their own: “My dear anti-Brotherhood liberal, allow me to remind you that just a few weeks ago you were desperately complaining about how grim the future looked, but now that you have been ‘relieved’ of them you have become a carbon copy of their fascism and discrimination,” the critic appealed in Egypt’s al-Shorouk newspaper.