European Union governments could decide to blacklist the military wing of Hezbollah on Monday (22 July), in a major policy reversal fuelled by concerns over the Lebanese militant movement’s activities in Europe.

Britain has sought to persuade its EU peers since May to put the Shi’ite Muslim group’s military wing on the bloc’s terrorism list, citing evidence that it was behind a deadly bus bombing in Bulgaria last year.

Olli Rehn, the EU’s top economics official strongly defended the ‘troika’ of international lenders, saying the monitoring team was essential to restoring euro zone credibility. His comments came as a rebuff to another Commission Vice President, Viviane Reding, who said the troika format should be abandoned.

Last week, the EU justice commissioner, Viviane Reding, called for the troika to be dissolved, saying it had run its course and that Europe did not need the IMF to solve its problems.

Racism, surveillance, and managing gender violence in the UK

New policies brought in to address violence against women in the UK are being implemented by large generic institutions at the expense of smaller specialist preventative and support organisations. For black and ethnic minority women, paternalistic ‘management’ appears to be inseparable from disempowerment, says Amrit Wilson

Systematic and free monitoring of news on UK-EU relations 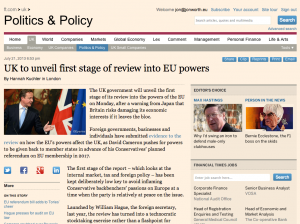 My challenge this morning was to build a systematic, and free, way to keep an eye on breaking news about UK-EU relations. Of course I have had ad hoc ways of doing this until now, but for a project I am working on I needed to make it more systematic. The news I need to monitor is ?what?s happening? sort of news, not opinion pieces.

Does Europe supply what Europe demands?

Last month, Andrew Wright, interim chief executive of Ofgem, the UK?s government regulator for the electricity and natural gas markets, warned that ?Britain?s energy industry is facing an unprecedented challenge to secure supplies? and that as a result, the country now faces a growing risk of power shortages by 2015.

Beyond appearances, the recent political crisis has changed things in Portugal 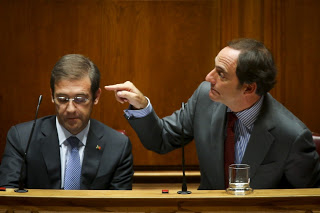 Political stability seems to have returned to Portugal – at least for now. The country’s ruling coalition and the opposition Socialist Party have failed to agree on the ‘national salvation pact’ demanded by President Aníbal Cavaco Silva to help the country successfully complete its EU/IMF bailout programme.

The divisions that fracture the EU run deep. Germany dominates the economic relationship between the EU and China, and this reflects a significant division in Europe. But this division is itself the result of much deeper differences, especially within the Eurozone. The creation of the euro brought with it the illusion of a single economy for the Eurozone. The crisis of 2008 and after has shattered that illusion. The stark internal differences have been laid bare, and made clear the completely different economies and interests of member states such as Germany and the southern European economies.

Anger amongst the Spanish electorate is rising fast amidst the dramatic events in a long-running corruption case implicating the Spanish Government. Liz Cooper says that above all the Spanish want stability, but where stability lies is now uncertain…