Skip to content
Istanbul mayor to ask residents about all future projects
The Istanbul Metropolitan Municipality will ask the public about every major project in the city
Occupy Gezi, beyond the religious-secular cleavage

The protests in Turkey started on May 27 with a modest resistance movement against the destruction of Istanbul?s Gezi Park and the planned construction, in its place, of a replica of the Ottoman artillery barracks that formerly stood there (which, however, was also to include a shopping mall). The Occupy Gezi movement has since grown exponentially and spread to other Turkish cities, largely in response to police brutality and to the inflammatory speeches of Turkey?s Prime Minister, Recep Tayyip Erdoğan. The unprecedented scope and duration of the protests?and, even more importantly, the emergent movement?s pluralistic composition and inclusive political style?make it a genuinely new phenomenon in the ninety-year history of the Republic. As Cengiz Çandar, a prominent liberal journalist has put it, these protests represent ?the most serious and meaningful civil society uprising that the Turkish society has ever witnessed.?

A Compilation of Gezi Illustrations, Caricatures

While images from Gezi Park Resistance expose power, violence and maleness; they also sets memory of those who took the streets and resisted.

Brazil protests are not like those in Turkey, FM says

After more than a week, the biggest series of protests to sweep Brazil in more than two decades

Taksim and the Left

A striking feature of the Turkish protests has been the distance that the demonstrators have put between themselves and existing center-left political parties. In this sense, Turkey’s protests resemble those elsewhere, from the ?Occupy Wall Street? movement to the protests in Spain and Italy.

An excursion through the partitions of Taksim Square

Taksim Meydanı. Partition Square. Although it has taken on potent new resonances in recent days, the name of Istanbul?s throbbing central plaza commemorates a now-forgotten history, the function of the site during the Ottoman period as a point of ?partition? and distribution of water lines from the north of the city to other districts.

Turkey?s Problem is Erdogan, not the Akp

In recent days the AKP, the Islamic-conservative party led by Prime Minister Erdogan, celebrated its tenth anniversary in government while unprecedented protests were being held in a number of Turkish cities. The epicentre for these protests is Istanbul and more specifically Taksim Square, which the government intends to subject to greatly opposed construction plans, involving a reduction of the Gezi Park, the building of a shopping mall and a large mosque. The police?s brutal reaction to peaceful protests has resulted in thousands more taking to the streets. There protests against Prime Minister Erdogan are extremely harsh and have at times been interpreted as secular Turkey?s reaction to Islamist repression imposing strict religious provisions through laws such as the one forbidding alcohol sales in shops after 10 p.m..

Demonstrators have been protesting Turkey’s government for weeks in cities across the country, sparked by police brutality against citizens angry over plans to destroy an Istanbul park. Hundreds of thousands of protestors took to the streets in cities across Turkey as the demonstrations evolved into a larger anti-government movement.

This past Saturday, police forces lined up outside of Istanbul’s Gezi Park ? the center of a three week protest against Prime Minister Recep Tayyip Erdogan ? gave warning, and moved in. In a matter of hours, the massive encampment set up by thousands 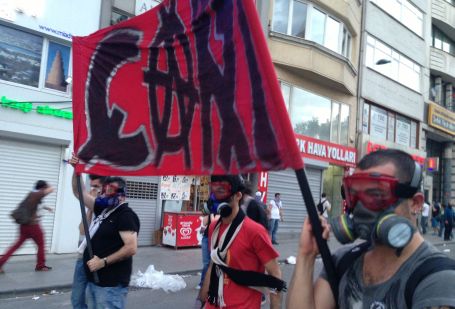 The most frequent question I have been asked since the start of the turmoil in Turkey has been whether it has surprised me.

The Art of #OccupyGezi 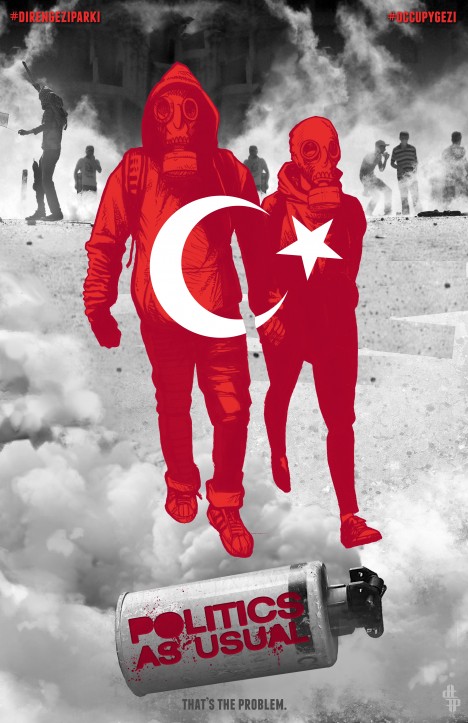 The Gezi Park events in Istanbul have triggered one of the largest and most serious civil unrest in decades in Turkey. It all started as a peaceful sit-in protest in order to prevent the demolition of the trees for the construction of a shopping mall in the park, but excess use of police force turned the events into a popular mass protest against the government?s increasingly authoritarian tendency to suppress any critique of its cultural, social or economic policies. The police first intervened on peaceful protestors on the 31st of May when a small group of activists were sleeping in the tents they put around the trees they were  guarding. The news of police brutality spread quickly on social media. The mainstream media however, looked away instead of broadcasting disproportionate use of police force.