Check out the first link:

Southern storm hails the start of the European Fall | ROAR

from Social Network Unionism by OrsanSenalp
By Jerome Roos On September 28, 2012 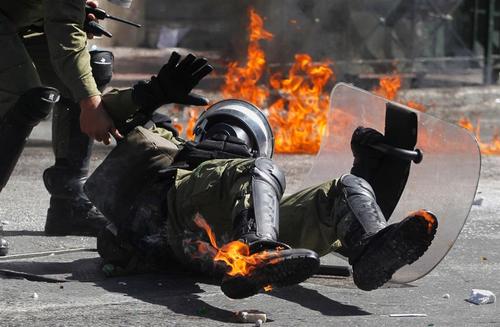 With storm clouds forming over Athens, Madrid and Lisbon, one thing is now clear: a new season of crisis and protest has begun. This time it?s serious.

An EU working group that’s been charged with coming up with recommendations for a terrorist-free European Internet has been brainstorming the stupidest goddamned ideas you’ve ever read, which are now widely visible, thanks to a leaked memo. The group, CleanIT, which is composed of cops, governments, and some NGOs from across Europe, has been given ?400,000 to make its recommendations, and a document dated August 2012sets out some of the group’s thinking to date. As mentioned, it’s pretty amazingly bad. Like, infra-stupid, containing strains of stupidity so low and awful they can’t be perceived with unaided human apparatus. Here’s Ars Technica’s summary of the ideas in the memo:

Spain: Creative Alternatives to an Economy in Crisis

by L. Finch
This post is part of our special coverage Europe in Crisis.
[All links lead to Spanish-language websites unless otherwise noted]
Since the start of the economic crisis, the Spanish government has not taken the necessary measures to foment growth or create jobs. On the contrary, they have made multiple cuts to the budget that put at risk entire social groups and endanger the rights of the citizenry. This has aggravated the situation of countries that are already on the brink of bankruptcy.

Spain: Should the Church Pay (All) its Taxes?

by Alexandra Quinn
In May of this year, Zamora became the first city in Spain to enforce that the Catholic Church pay the Property Tax (IBI). Through the adoption of this measure, the local government of Zamora is trying to reduce the deficit that affects so many local Spanish councils.
Social networks have captured information and