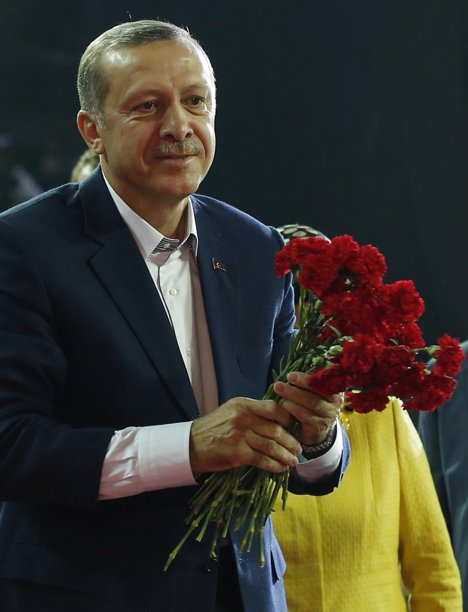 Turkey’s Prime Minister and leader of ruling Justice and Development Party (AKP) Tayyip Erdogan holds carnations as he enters the hall during his party congress in Ankara September 30, 2012. REUTERS/Murad Sezer

Erdoğan calls on Germany, France to take action against Islamophobia

from Hurriyet Daily News
Prime Minister Recep Tayyip Erdoğan today called on France and Germany to take action against recent incidents against the Muslim identity in their countries.

AKP hosts dignitaries from all over the world

from Hurriyet Daily News
None of the opposition parties represented in Parliament were present today at the hall hosting the big congress of the ruling Justice and Development Party (AKP), although the same hall hosted several regional opposition parties. 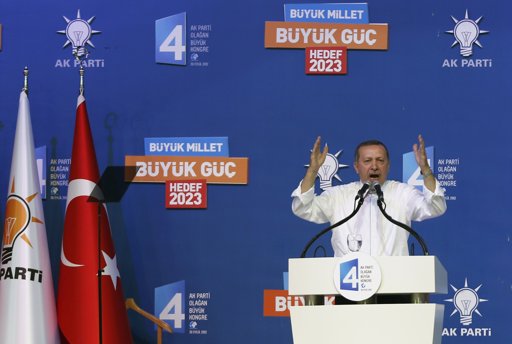 from Global Voices Online by Ruwayda Mustafah
The Prime Minister of Turkey, Recep Tayyip Erdoğan, has signaled that he will negotiate with Kurdish rebels after months of deadly violence from Kurdish rebels in response to Turkish policies.
It is the fear of further escalation of this violence that has led Erdoğan to consider talks. In the past Turkey has been unwilling to negotiate with rebels, despite calls from the pro-Kurdish Peace and Democracy Party.

from Today’s Zaman, your gateway to Turkish daily news :: Columnists by YAVUZ BAYDAR
It took 21 months. 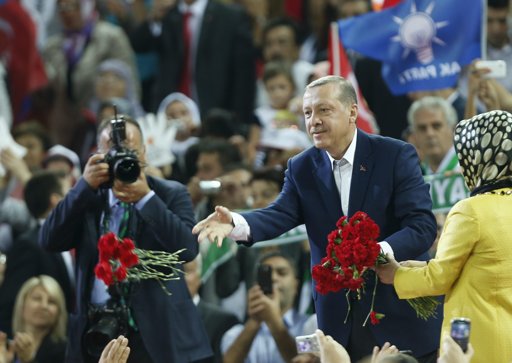 Turkey’s Prime Minister and leader of ruling Justice and Development Party (AKP) Tayyip Erdogan throws carnations to his supporters as he enters the hall during his party congress in Ankara September 30, 2012. REUTERS/Murad Sezer

by Simon Tisdall
Turkish court’s jailing of hundreds of military officers over Erdogan coup plot revives fears of return to authoritarian rule
The jailing of hundreds of army officers accused of plotting a coup against the government of prime minister Tayyip Erdogan marks a low-point for Turkey’s military, which for decades exercised shadowy control over the country with scant regard for democratic values. But the outcome of the so-called Sledgehammer (Balyoz) case highlights a new worry: that Erdogan, in power since 2002 and with his eye on a revamped, executive presidency, is becoming just as authoritarian and over-bearing as the generals once were.

The Turkish hammer of injustice

by Acturca
The Washington Post (USA) September 22, 2012, p A17 Dani Rodrik * After a patently sham trial, a Turkish court on Friday handed down lengthy jail sentences to more than 300 military officers convicted of planning a coup, code-named Sledgehammer, in 2003. Turkey?s courts have been working overtime to throw government opponents of all political

by M.A.M
Mavi Boncuk |Turkey’s Kurdish Calculus by Soner Cagaptay The Wall Street Journal September 25, 2012 The Kurdistan Workers’ Party, or PKK, has made a bloody comeback in Turkey. According to a recent report by the International Crisis Group, PKK-related violence has killed some 700 people since the summer of 2011. This deadly toll recalls the horrors of the 1990s, when thousands of civilians were killed in PKK terror attacks and a brutal war in eastern Turkey between the government and Kurdish militants.

The Sledgehammer Descends: More Than 300 Officers Sentenced to Prison

from Kamil Pasha by Jenny White
On September 21 a court in Istanbul has sentenced three retired generals to life imprisonment in the ?Balyoz? (Sledgehammer), then reduced the sentence to 20 years. Air Force Cmdr. retired Gen. İbrahim Fırtına, retired 1st Army Cmdr. Gen. Çetin Doğan and retired Navy Cmdr. Adm. Özden Örnek were convicted to life on charges of ?attempting to overthrow the government by force,? but the terms were later reduced to 20 years because the attempt to stage a coup was ?incomplete?. 331 of the 365 suspects were sentenced to prison terms, while 34 were acquitted. People in the courtroom chanted support for the officers, ?We are proud of you!?. (Click here for details of the case.)

from Today’s Zaman, your gateway to Turkish daily news :: Turkish Pre by HASAN CEMAL MİLLİYET
While discussing what will happen in the next 10 years in Turkey, we think of the Justice and Development Party (AK Party) as the ruling party and Prime Minister Recep Tayyip Erdoğan as the president.