Dutch Elections: “The Political Centre is Back!”

from FT.com – World, Europe
It is too early to declare the crisis over. The task of creating the institutions for a viable monetary union is in its infancy, but politicians have a window to do this

Too soon to jump to conclusions: the Dutch debate on Europe has only started 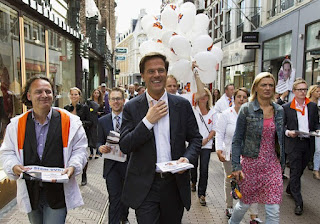 As we said in our pre-election briefing, the Dutch elections saw a shift back to the centre, compared to the early signs of the campaign. Granted, a stronger combined majority for the two main parties – centre-right VVD and centre-left PvdA – than many had expected. The Socialist Party stayed on the same number of seats as last time around, while the populist Party for Freedom suffered a pretty heavy defeat (losing nine seats).

from euro|topics
The formation of a grand coalition seems increasingly likely in the Netherlands. The right-wing liberal VVD party led by Prime Minister Mark Rutte edged out the Labour Party in the early parliamentary election on Wednesday, while the party of the anti-European right-wing populist Geert Wilders suffered major losses. Commentators celebrate the election as a victory for Europe but fear that euroscepticism could make a comeback given the poor state of the economy.

from open Democracy News Analysis – by Pere Vilanova
September 11: the world – and Spain – is taken by surprise with the images of over a million people marching down through the streets of Barcelona, peacefully, in a very calm and cheerful mood, with no incidents whatsoever ? in itself marking quite a distinctive exception to the trend in these years ? but claiming nothing less than In-de-pen-den-cia, Independence.

by EU-Digest
EU foreign policy chief Catherine Ashton strongly criticised Russia for its authoritarian tendencies since Vladimir Putin returned to the presidency in May, telling the European Parliament yesterday (12 September) she also welcomed the ?awakening of the civil society? in the Union?s biggest neighbor.

from euro|topics
Germany’s Constitutional Court on Wednesday ruled in favour of Germany participating in the European Stability Mechanism. However the country’s liability may not exceed a fixed limit without the permission of the German parliament, or Bundestag. The ruling by the judges in Karlsruhe will only plunge the crisis-stricken states further into debt, some commentators argue. Others say the decision has paved the way for the creation of a fiscal union and the rescue of the euro.

Public opinion and Europe: back in the real world

by Open Europe blog team
Brussels is on manoeuvres. European Commission President Barroso yesterday called for a quantum leaptowards a “federation of states” (see here) and today his counterpart in the European Council, Herman van Rompuy, put forth a wishlist covering a range of items that will trigger more eurozone integration (a eurozone budget, debt-pooling, etc). With yesterday’s Dutch elections being interpreted as a victory for the centre over the eurosceptic fringe, and the Karlsruhe guys in red robes out of the way, the European project is breathing some fresh air again, right?

Towards Europia? Germany and the euro crisis

from open Democracy News Analysis – by Ulrike Guerot
Europe is in the crucial weeks of its epic crisis. The judgment by Germany’s constitutional court returns authority to politicians in shaping a solution to the eurozone’s troubles. But at a deeper level the contest for Europe’s future is also about its social model, cultural resources and democratic capacity, says Ulrike Guerot.

The Roma rights dilemma of the French left

from open Democracy News Analysis – by Bernard Rorke
On the Roma issue, the French left must choose: whether to align itself with the forces of progress to combat anti-Roma racism and exclusion; or persist with evictions and expulsions, and find itself bedded down with Europe?s forces of reactionary populism.

First report from my side on the European Global Strategy debate

from Ideas on Europe by Lars-Erik Lundin
download link: http://www.ui.se/upl/files/76641.pdf
UI Occasional Paper No 11 ? ?From a European Security Strategy to a European Global Strategy: Ten Content-Related Issues?
?UI researcher and former EU Ambassador Lars-Erik Lundin puts forward a state of play analysis on the revision of the European Security Strategy of 2003. The paper provides in ten points an initial contribution to the discussion Sweden, Italy, Spain and Poland recently recently initiated on a European global strategy (EGS) (see website?)

by EU-Digest
Here are five myths about the European Union:

1. The Europeans will never get their act together.
The eurozone will never be a United States of Europe, but its members have responded to the crisis with impressive speed. To defend against the financial collapse of the weaker members, they have created joint rescue funds approximating $1 trillion. The European Central Bank has lent trillions more, like the Federal Reserve, and has just reaffirmed that it will do as much as necessary to avoid catastrophe.

Separation anxiety: the state of independence movements in Europe

from World news: Turkey | guardian.co.uk by Simon Tisdall
Catalonia is just one of many regional nationalist movements seeking greater autonomy or to break away completely
The apparent resurgence of the independence movement in Catalonia finds echoes among other minority nationalist groups in Europe.

The EU?s Assistance to 3.11 in Japan: Evaluation and Prospects

from Ideas on Europe by Mika Obara
Although it has been a while since Japan?s 3.11 Earthquake, as a response to the ECFR?s analysis ?Assistance to Japan after the tsunami?, this post will briefly present: (1) the evaluation of the EU?s disaster relief; (2) the lack of Japanese media coverage of the EU?s assistance to 3.11 in Japan; and (3) strategies for the EU towards the future disaster relief campaigns to Japan.