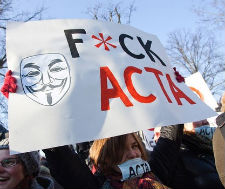 A lot of prestige had been building up toward today?s vote in the International Trade committee (INTA), which was about to give its recommendation to the European Parliament on the ACTA treaty.
Six months ago, it looked like a no-brainer. Then, protests on the streets in Poland appeared, spreading through Europe like wildfire. The Polish government promised to put ratification of ACTA on hold, pending the outcome of the European Parliament. Shortly thereafter, so did pretty much everybody else.
So, all eyes on the European Parliament.
I have written before on why ACTA lives or dies with the acceptance of Europe: if two of the world?s three largest economies do not accept a trade

Coders’ Rights At Risk in the European Parliament

from EFF.org Updates by katitza
Coders have never been more important to the security of the Internet. By identifying and disclosing vulnerabilities, coders are able to improve security for every user who depends on information systems for their daily life and work. Yet this week, European Parliament will debate a new draft of a vague and sweeping computer crime legislation that threatens to create legal woes for researchers who expose security flaws.
treaty, it does not exist. China (#3) is not a party to ACTA, and it is being pushed by the United States (#2). If the European Union rejects it, the treaty is without practical effect.
So, again, all eyes on the European Parliament.

from Boing Boing by Cory Doctorow
Runa from the Tor anonymity project sez, “Karen and I will be answering questions on Reddit today. Feel free to ask us anything you’d like relating to Tor and the Tor Project!”

Euro 2012: How Soccer is Going Digital

from The Official Google Blog by A Googler
The Miami-Illinois language was considered by some to be extinct. Once spoken by Native American communities throughout what?s now the American Midwest, its last fluent speakers died in the 1960s. Decades later, Daryl Baldwin, a citizen of the Miami Tribe of Oklahoma, began teaching himself the language from historical manuscripts and now works with the Miami University in Ohio to continue the work of revitalizing the language, publishing stories, audio files and other educational materials. Miami children are once again learning the language and?even more inspiring?teaching it to each other.

The 5 Types of Facebook Fans (and How to Keep Them)

from social media vb by Steph Parker
One of the things that’s kept me busy during my community management days has been attempting to profile the various types of Facebook fans. And while fans are each unique (since they’re all different people), many of their behaviors fall into certain patterns. Here are the 5 most common types of Facebook fans that I’ve seen while managing communities, and how you can tailor your content to keep them.

The Beginner?s Guide to Tumblr

from Wired Top Stories by Kim Zetter
The attackers behind the complex Flame cyberespionage toolkit, believed to be a state-sponsored operation, used an extensive list of fake identities to register at least 86 domains as part of their command-and-control center, and were particularly interested in stealing AutoCAD documents from infected machines. They also appear to have updated their malware even after it was publicly exposed last week.

from kottke.org by Jason Kottke
I tweeted about this but wanted to document it here for posterity. The Attorney General of Texas Child Support website has the worst set of password requirements I’ve ever seen.

from Mashable! by Brandon Smith

A Very Pinterest-ing Infographic About Visitors

from social media vb by steve olenski
Pinterest, the fastest-growing social media platform, has some very interesting visitors. Here’s a breakdown that should be of keen interest to brand managers.

I?ve seen the future of social influence measurement, and it isn?t Klout

from The Next Web by Jan Rezab