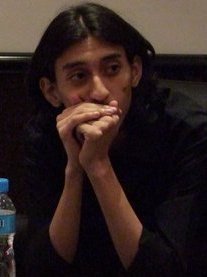 Hamza Kashgari, 23, (image at left) over tweets perceived as an insult to the Prophet Muhammad.

from Global Voices Online by Jillian C. York
Saudi journalist Hamza Kashgari set off a social media firestorm last week when he tweeted an imaginary conversation with the Prophet Mohammed.  In his tweets, which have since been deleted, he wrote to the Prophet: ?I have loved the rebel in you? but ?I do not like the halos of divinity around you. I shall not pray for you.? He also wrote, ?I shall shake [your hand] as equals do ? I shall speak to you as a friend, no more.?

Twenty-three-year-old Saudi journalist Hamza Kashgari has been arrested in Malaysia after sending out a series of controversial tweets about the Prophet Muhammed Saturday that caused some religious conservatives to call for his execution. He was detained Thursday morning at Kuala Lumpr International Airport, the Wall Street Journal has confirmed.

from EFF.org Updates by jillian
Hamza Kashgari is under threat. The blogger and journalist fled to Malaysia from Saudi Arabia on February 8 after tweets he wrote about the Prophet Mohammed provoked clerics to demand he be tried for apostasy and members of the public to call for his murder. After arriving in Malaysia on his way to a third country, however, he was arrested by security officials at Kuala Lumpur airport, according to a report from Human Rights Watch.

Tim Berners-Lee Takes the Stand to Keep the Web Free

from Wired Top Stories by Joe Mullin
Tim Berners-Lee, who invented the Web, testified Tuesday in a Texas courtroom, fighting to keep the web’s most basic interactivity from being subject to licensing fees from a patent troll. If the fight fails, any website with interactive features may have to pay up to a little known firm called Eolas and the University of California.

from social media vb by albertouribarri
…free access to information and knowledge is a fundamental right that cannot be waived. Putting them to a level doesn?t help to clarify the dispute as they represent two models of society that are not only different but also antagonist. Who told ?only knowledge will set you free??, perhaps we should say now ?only entertainment will set you free??

from kottke.org by Jason Kottke
Cat Valente remarks on the old-fashionedness on display in Star Trek DS9, particularly in regard to what the characters do and don’t do with their free time, infinite bandwidth, extreme connectedness, and lack of scarcity.

Online Dating? You Might as Well Look for Love in a Bar [STUDY]

from Mashable! by Sam Laird
Online dating sites frequently trumpet their ability to corral the most compatible fish in your sea through sophisticated algorithms. But a psychological study released this week says that you may be better off doing it the old-fashioned way and just meeting a stranger at a bar.

from social media vb by dleitch@morevisibility.com
Twitter has exploded onto the social media circuit in recent years. More and more companies are creating accounts and establishing a Twitter presence ? to the point where it?s become a standard marketing practice. But, just like any other social media account you initiate, a Twitter account is not something you just create and forget about. To reap any benefit, it should be cultivated properly, starting with these basics:

from apophenia by zephoria
Pew Internet & American Life Project just released a new study called ?The tone of life on social networking sites? where they examine adult meanness and cruelty. This complements their piece on ?Teens, kindness, and cruelty on social network sites.?

from social media vb by roanyong
Randi Zuckenberg, are you listening? Established pseudonym is going to be the new norm. And whoever allows the use of it will win the heart and soul of the digital natives.

What the hell is going on with Pinterest? It?s suddenly on the tip of everyone?s tongue, influencing countless web designs, and has infiltrated most of my other social networks. Even I have fallen under its spell, and I am not necessarily happier for it.

from All Facebook by Jackie Cohen
Twenty-one percent of employees are friends with their boss on Facebook, and those who do tend to be younger or male.

from social media vb by PaulFabretti
What we know as privacy has changed immeasurably from just a year ago and whilst we are increasingly comfortable with both the quantity and nature of what we share and when, the commercial thirst for using personal data for financial gain has the potential to bring the whole personalised web pack of cards falling down around our ears.

from EFF.org Updates by rebecca
San Francisco – Millions of people use Internet dating sites to search for love and connection every day, but it could come a big cost for their privacy and security. The Electronic Frontier Foundation (EFF) has found that many services are taking shortcuts in safeguarding users’ profiles and other sensitive data.

from EFF.org Updates by rainey
Concerned about your privacy when you use online dating sites? You should be. We recently examined 8 popular online dating sites to see how well they were safeguarding user privacy through the use of standard encryption practices. We found that the majority of the sites we examined did not take even basic security precautions, leaving users vulnerable to having their personal information exposed or their entire account taken over when using shared networks, such as at coffee shops or libraries