from euro|topics
The Greek parliament on Sunday night approved by a large majority the austerity package that the troikademands as a precondition for the next bailout instalment. At the same time roughly 100,000 people demonstrated against the austerity measures, and when riots broke out roughly 100 people were left wounded and more than 40 buildings set alight. The entire country could go up in flames if it comes to an uncontrolledinsolvency, some commentators warn, while others stress a renewed confidence in the Eurozone and urge the Greeks to make a greater effort.

A new Greece must emerge from the current existential crisis

from Ideas on Europe by Protesilaos Stavrou
Greece has been at the focal point of international media, because of the ongoing economic crisis that has severely hit the country the last few years. Though the analyses of several experts and ?experts? are centered around the economic aspect of the matter, I uphold that at the root of the crisis, as far its internal dimension is concerned, Greece faces an existential crisis ? a crisis of identity. The Greek people were caught completely unprepared when the crisis hit them. They saw their world changing dramatically overnight, as the practices, mentalities and attitudes of the past had no application to the present. The Greek populace has still not recovered from this shock and has not yet realized that it needs to change as the world around it changes as well, something which is depicted in the inane general strikes and the ?scorched earth? practices of some gangsters who think they will do harm to ?the system? by burning the property of their neighbors; by ultimately harming those who suffer the most from the current crisis.

from euro|topics
Greece must fulfil additional conditions to receive the second rescue package before the meeting of euro finance ministers on Wednesday. That was made clear by EU Economic Commissioner Olli Rehn on Monday. Athens must implement the austerity requirements quickly and independently to avoid state bankruptcy, some correspondents write, while others doubt the Greeks are at all capable of doing so.

The decision of 25 EU governments to endorse a fiscal compact marked a turning point in the sovereign debt crisis, writes Guido Montani of the Union of European Federalists. Now a debate on the political future of the EU begins.

from FT.com – World, Europe
A departure from the eurozone would be messy but not catastrophic and is a concept that is no longer unthinkable

from Blogactiv by Georgi Gotev
John Lennon remained my role model in mysterious ways even after he was killed on 8 December 1980. 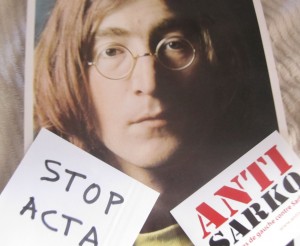 One can figure out what John would like or dislike at present times. Last month at the Brussels airport, I was given a glossy Montblanc advertisement brochure, suggesting that John would use and promote this exotically expensive writing device, if he was still around.

Here are some more twitterers I enjoy following with regard to #ACTA and other things concerning politics in the digital era.

by Grahnlaw
Last autumn I discussed the Digital Agenda for Europe, and I asked readers for information about corresponding information and communication (ICT) policy strategies at national level in the member states of the European Union (especially in English or other widely understood languages).

The response has not amounted to much yet, so I return to the national digital agendas on the basis of what I happen to find.

by Grahnlaw
The blatant attempted robbery of citizens’ digital rights by the European Union and its Member States, Australia, Canada, Japan, the Republic of Korea, the United Mexican States, the Kingdom of Morocco, New Zealand, the Republic of Singapore, the Swiss Confederation and the United States of America, through the Anti-Counterfeiting (and much more) Trade Agreement ACTA, deserves generous helpings of humble pie on their menu.

by Grahnlaw
Many of the biggest anti-ACTA demonstrations yesterday took place in Germany. It is therefore only fair to begin with two German influencers of digital politics. Digitale Gesellschaft @digiges works for democratic participation in the digital world. Netzpolitik @netzpolitik is a blog and a political platform for freedom and openness on the Internet.

by Grahnlaw
On Twitter #ACTA reflects – in almost real time – news and opinion about the anti-counterfeiting (and much more) trade agreement. Even if some of the exhortations and slogans are over the top, there are reality based news items and knowledge based critical analyses among the tweets.

Is Britain a role model for Islamists?

from BBC News | Europe | World Edition
Is Britain a good role model for the Muslim world?

by Grahnlaw
We started exploring the intellectual property rights (IPR) agenda of the European Commission here and here.

We arrived at the Commission’s roadmap or strategy paper, published last spring:

from open Democracy News Analysis – by Paul Linden-Retek
In search of a new European politics, we must face the fact that we have skirted the political question of identity: how do we redraw the boundaries (symbolic and physical) dividing us so that we can re-democratize the European public space?

Democracy and transparency remain the biggest victims of the euro crisis

Over on the Telegraph blog, we argue:

The 80,000 Greeks that came out in Athens yesterday to protest the latest round of bailout austerity imposed by EU-ECB-IMF troika can shout all they want. They can even express their disgust at the polling booths in the country?s general elections, scheduled for April. It won?t make much difference. To get its second bailout, the leaders of Greece?s main political parties are required to submit a written commitment to fully implement the package regardless of who wins the elections in April.

from Blogactiv by gergelyvg
The recent exchange of highly tense letters in December 2011 between European Commission President José Manuel Barroso and Hungarian Prime Minister Viktor Orbán, and the ahead of scheduled departure from Budapest of the joint EU ? IMF negotiating team preparing the talks on a new IMF ? loan were just two signs the current Hungarian center ? right government of Prime Minister Orbán has strained relations with key Western leaders. At the center of the Barrosso ? Orbán dispute was a new legislature on the Central Bank of Hungary, which critics say could harm the independence of the bank, but it is hardly the only issue spurring tensions between Budapest and Brussels, and in a broader picture, Budapest and the ?West?.

Lessons from a short but cold European Winter

from Blogactiv by Eberhard Rhein
The European winter 2011-12 will go down in history as divided into two unequal parts: very mild until mid-January and in the first half of February.
It is therefore appropriate to draw a few lessons.

from Blogactiv by Blogactiv Team
Guest post by Dan Luca & Nienke van Leeuwaarden.
An interesting approach is taken by Stefan Lehne, visiting scholar at Carnegie Europe, about the European External Action Service (EEAS). The big paradox seems to be that since the EEAS has become active ? European foreign policy is less visible and effective than before its existence.

by Grahnlaw
The high-running Twitter discussion about #ACTA, the Avaaz online petition for rejection of the Anti-Counterfeiting (and much more) Trade Agreement and the wave of demonstrations all over Europe merit some facts and discussion about the IPR agenda of the EU Commission.

EU demands more despite Greek accord

from Hurriyet Daily News
Eurozone finance ministers have demanded more steps and a parliamentary seal of approval before providing aid to Greece even as the country?s political leaders have reached consensus on a deal on economic reforms to secure a second EU bailout.

from Ideas on Europe by European Geostrategy
By Bence Németh
According to many analysts, Permanent Structured Co-operation (PESCO) ? the most important novelty of the Treaty of Lisbon in the field of military affairs ? has not yet been created, because the European Union?s Member States have been unable to agree on the details. Self-evidently, PESCO has therefore failed to develop through the framework of the European Union. But it has begun to emerge elsewhere, albeit in a bilateral form: it is called the British-French security treaties.

Why is Greece cutting private-sector wages?

from FT.com – Analysis
Angela Merkel?s plans for a shift in power from EU members to Brussels would generate constitutional problems within Germany and worries among allies, writes Quentin Peel

from open Democracy News Analysis – by Vidhya Ramalingam
Safeguarding communities and nations from the potential threats of radical right narratives is not about controlling or prohibiting their political parties: but about bridging gaps between political leadership and communities.
This week saw the release of the UK?s Home Affairs Committee report ? on the roots of violent radicalisation. The report, a comprehensive overview of the drivers of terrorism and the appropriateness of current preventative approaches, mentions that the revised Prevent strategy, ?only pays lip service to the threat from extreme far-right terrorism.? Though it has been agreed that Prevent resources should be allocated proportionately according to levels of terrorist threat, the report highlighted that the Committee received persuasive evidence about the potential threat from extreme far-right terrorism.

from FT.com – World, Europe
Angela Merkel?s plans for a shift in power from EU members to Brussels would generate constitutional problems within Germany and worries among allies, writes Quentin Peel

Germany, France: Disparities in Policies Regarding the Integration of Foreign Students

from Global Voices Online by Abdoulaye Bah
Elsa Doladille writes  [fr] on the Educators Without Borders blog : ? While the Guéant Bill in France aims at toughening the conditions for foreign students to obtain a work permit,  Germany encourages the integration of students from abroad in their workforce.?

France: Why the self-flagellation?

President Sarkozy wants France to become more like Germany. In a recent speech he made 15 positive references to the German economic model. Unlike France, he argued, Germany had reformed its economy and was reaping the rewards in terms of improved competitiveness and superior economic performance. He bemoaned the alleged decline in French industrial prowess and praised Germany?s success at defending its industrial base. Is Sarkozy right to be so critical of French performance? And would it make sense for France to emulate the German model?

from euro|topics
Greece must fulfil further conditions in order to receive the next rescue package. Among other requirements, the Eurozone finance ministers want written pledges from the Greek parties that they will implement the austerity measures even after the elections in April. Such displays of distrust further distance the Greeks from the EU, some commentators write, while others say the whole rescue plan is just a show.

from open Democracy News Analysis – by John Phelan
That?s how democracy works between the EU and Ireland. The EU and its servants in the Dáil either give the Irish people too many votes or none at all.