Orhan Pamuk is one of them…


12 Writers Who Still Refuse to Use Computers

Jan 1st, 2012
Computers are incredible tools: we use them to connect around the world, gather all of the information in the universe, find inspiration, and maybe play a few games now and then. They’re also very helpful for writers, offering organization, editing, and writing tools that are more useful than any tools available before. But for so many writers, they’re just not the right tool for the job. There’s something romantic and creative about setting pen to paper, which for many writers, makes the very act of writing possible. For others, pen and paper are favored for their portability and lack of constant distractions. Others find that they do their best work on a typewriter. Whatever the reason or method, these writers have chosen not to compose their works on computers, preferring instead to put pen to paper or fingertips on the typewriter. And although some do use computers for editing and social connections, their first drafts are never created with the use of digital aids. Read on to learn why and how these 12 famous writers get their best work done without the help of computers.

Why College Is Still Relevant in the Age of Free Information

Hansoo Lee is co-founder and CEO of Magoosh, an online test prep company with products for the SAT, GRE, and GMAT.

from The Immanent Frame by David E. Campbell 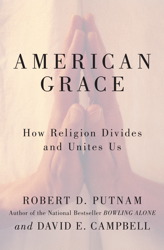 Any authors would be pleased by an array of laudatory and thoughtful comments on their work, especially by a group of critics as distinguished and diverse as this. We are grateful for the care and attention our commentators have taken withAmerican Grace, especially given that they are outside of our own discipline of political science. In writing this book, our hope was to speak beyond disciplinary boundaries. It is thus particularly gratifying to read John Torpey describeAmerican Grace as ?public sociology.? This is precisely what we hoped to achieve. We believe that more social science should be directed toward informing our public discourse, and that rigor versus relevance is a false choice.

For every issue of the magazine, ten scholars consider dozens of recently published academic and popular nonfiction books for coverage. After choosing a handful worthy of review, they write up capsule reviewsthat cast a critical eye on the most important titles in their respective fields. As this year came to a close, the editors at Foreign Affairs asked each of the reviewers to choose the three best of 2011. Here they are.

The Pedagogy of Play and the Role of Technology in Learning

from MediaShift
Education content on MediaShift is brought to you by:
Innovation. Reputation. Opportunity. Get all the advantages journalism and PR pros need to help put their future in focus. Learn more about USC Annenberg’s Master’s programs.
The goal of the videogame “Civilization” is to build a civilization that stands the test of time. You start the game in 4000 B.C. as a settler and, with successful gameplay, can create a civilization that lasts until the Space Age. Throughout the game, you need to manage your civilization’s military, science, technology, commerce and culture.

from Writerswrite.com’s Writer’s Blog
Lake Superior State University has released its 37th annual List of Words Banished from the Queen’s English for Misuse, Overuse and General Uselessness. The university takes suggestions all year for obnoxious words and phrases that should be banned from decent discourse.

some digital humanities encounters at #mla12

from digital digs by Alex Reid
I suppose it is fair to say that I passed through MLA this year. I was only in Seattle for one day (Saturday) when panels were going on and attended four that day, including my own. It’s the first time I’ve presented at MLA in over a decade. It’s not really a conference that I’ve ever considered to be in my discipline. And if you want to understand why, you can go to this search page for the program and look at the drop-down menu of subjects. There are only two subjects that are not some kind of “literature:” linguistics and “the profession.” Rhetoric is a subheading of “General Literature,” but my panel was in Electronic Technology, also in “General Literature.” Obviously, I can’t really operate in a world that views everything as some kind of literature. But that’s fine. As I said, it’s not my conference or professional organization.

from digital digs by Alex Reid
Here is the text of my brief roundtable talk at MLA.
When we look at digital humanists and those who study technology in writing studies, we discover a field of methodological silos with long histories situated in a context of broader disciplinary antagonism. Still for decades we have gotten along fine, hardly paying any attention to one another, until two things happened. The first was the technological revolution of the last 15 years, which has dramatically expanded the work we might do and made the study of digital media a more central subject for the humanities. The second was the invention and popularization of this term the “digital humanities,” which unlike humanities computing, has come to mean something larger. Not only are there now more people than ever with an interest in what humanities computing has become, but there are a far wider range of scholars, not only in writing studies but also in new media studies, game studies, and the cultural study of technology who never considered themselves in humanities computing but now find themselves drawn into this umbrella term, the digital humanities. We¹ve reached a point where Stanley Fish writes in the NY Times that the digital humanities includes “the organization and administration of libraries, the rethinking of peer review, the study of social networks, the expansion of digital archives, the refining of search engines, the production of scholarly editions, the restructuring of undergraduate instruction, the transformation of scholarly publishing, the re-conception of the doctoral dissertation, the teaching of foreign languages, the proliferation of online journals, the redefinition of what it means to be a text, the changing face of tenure ….in short, everything.”

American Dialect Society Names Occupy the 2011 Word of the Year

Here is a list of some of the other winning words at the society’s annual words of the year vote: