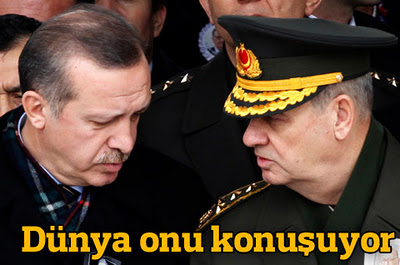 from NYT > Turkey by By SEBNEM ARSU
Gen. Ilker Basbug faces charges in a long-running case involving accusations of a plot to overthrow Prime Minister Recep Tayyip Erdogan?s pro-Islamic government.Q&A: Turkey’s military and the alleged coup plots
BBC News
The BBC’s Bridget Kendall examines the issues behind the so-called Ergenekon plot and other related cases. What is the background to the alleged plot? Ergenekon is the name given to what prosecutors claim is a shadowy network of ultra-nationalists and

With a general’s arrest, Turkey is at last facing up to its militarist culture | Kaya Genc

from World news: Turkey | guardian.co.uk by Kaya Genç
The sight of a general like İlker Başbuğ being tried in a civil court is among the biggest triumphs imaginable for Turkish democracy
The news came as a shock for many: a Turkish general, arrested. But for some, this week’s detention of İlker Başbuğ, Turkey’s former chief of staff, was a cause for celebration. It seemed to many of us as if Turkey had finally started to get to grips with its militarist culture. After all, Başbuğ is accused of being part of a failed coup against a democratically elected government. So the message sent to Turkey’s military establishment was clear: do not mess with Turkish people’s political choices.

Ankara has a heavy political agenda ahead

Ankara has a loaded schedule this week, with the arrest of former top commander İlker Başbuğ expected to dominate Turkey?s political agenda.

Jailing generals does not end tutelage

from Today’s Zaman, your gateway to Turkish daily news :: Columnists by YAVUZ BAYDAR
To witness the country’s ?almighty? top commanders being sent to jail was unimaginable for the mortal citizens of Turkey. Once upon a time, it was also unthinkable for any civilian prosecutor to even dare to include as suspects in a civilian case officers involved in illegal political activity, or ?dirty warfare? against dissidents or Kurds. As late as 2005, a weekly (Nokta) was forced to discontinue publishing — a decision then applauded by a militarist ?mainstream? media — simply because it had ?dared? to publish the diaries of a naval commander, Özden Örnek.

Tensions rise between Turkish military and government
Business Recorder (blog)
The arrest stems from a three-year investigation into the “Ergenekon” organisation. Prosecutors allege the group brought together serving and former senior military officers and civilian officials in a plot to overthrow the moderate Islamist government

from Hurriyet Daily News
Reaction is growing to the historic arrest of Turkey?s ex-top soldier, as the CHP slams the move while the government mulls shorter prosecution times

from Journalist in Turkey, background articles, news and weblog about by Fréderike Geerdink
DIYARBAKIR ? Ilker Basbug was the last Turkish army leader who belonged to the ?old guard? of Turkish army leaders. He commanded the second biggest army in NATO from 2008 to 2010, and clashed several times with the AKP government of Prime Minister Erdogan.  Basbug (68) was detained on Friday as a suspect in a […]