from Editors Weblog – all postings by Federica Cherubini
Repression of uprisings makes the region the world’s most dangerous place for journalists.

Sixty-four journalists and other media workers were killed world-wide because of their professional activities in 2011, with nearly half of them killed in Pakistan, Iraq, Libya and Yemen, the World Association of Newspapers and News Publishers (WAN-IFRA) said Thursday.

from Editors Weblog – all postings by Federica Cherubini
The Associated Press has gone a step further in its social media strategy: Eric Carvin, an AP Nerve Center news producer and former National Desk editor, has been named the organization’s social media editor, a press release announced.

from Editors Weblog – all postings by Emma Heald
2011 was a big year for news in more ways than one. Reporters were amply tested in their coverage of big breaking news stories such as the death of Osama Bin Laden or Muammar Gaddafi, major disasters such as the Fukushima earthquake, and complex political unrest much of the Arab World.

Amy Webb: Big data, mobile payments, and identity authentication will be big in 2012

from Nieman Journalism Lab by Amy Webb
Editor?s Note: We?re wrapping up 2011 by asking some of the smartest people in journalism what the new year will bring.

from MediaShift
Yes, 2011 was another year of massive change in the American media landscape, with newspapers struggling, radio and TV trying to sharpen digital strategies, and magazines prettying themselves for tablets. But more often than expected, we turned our eyes overseas, to the role of social media in organizing protests and revolutions in the Arab world. To the spread of Facebook and freer speech in places like Egypt and Libya. And to the shocking phone-hacking scandal that brought the News Corp. empire to its knees, shuttering its most popular tabloid, the News of the World (published since 1843).

from MediaShift
It’s holiday time, and that means travel mania, less work and yes, year-end roundups. Yes, they are the lazy way to finish out the year for journalists and bloggers around the world, the ultimate in traffic catnip. But we thought we could take a different approach, doing year-end roundups for each niche we cover at MediaShift, giving our correspondents the space to talk about important trends that happened in 2011, and pointing us toward what we might expect in 2012. Happy reading, and happy holidays! 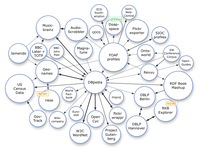 Big data is big business.Management professionals have known this for some time; this reportpublished by the management-consulting firm McKinsey & Companyback in May notes that “the amount of data in our world has been exploding, and analyzing large data sets–so-called big data–will become a key basis of competition.” The need to engage with large sets of data is growing all the time for leaders in all sectors, claims the report, as the rise of new business practices, multimedia and social media means that more data than ever is being recorded.

Nicholas Carr: 2012 will bring the appification of media

from Nieman Journalism Lab by Nicholas Carr
Editor?s Note: We?re wrapping up 2011 by asking some of the smartest people in journalism what the new year will bring.
To kick things off, it?s Nicholas Carr, the veteran technology writer, whose most recent book ? The Shallows: What the Internet Is Doing to Our Brains? was a finalist for the 2011 Pulitzer Prize.
For years now, the line between the software business and the media business has been blurring. Software applications used to take the form of packaged goods, sold through retail outlets at set prices. Today, as a result of cloud computing and other advances, applications look more and more like media products. They?re ad-supported, subscribed to, continually updated, and the content they incorporate is often as important as the functions they provide. As traditional media companies have moved to distribute their wares in digital form ? as code, in other words ? they?ve come to resemble software companies. They provide not only original content, but an array of online tools and functions that allow customers to view, manipulate, and add to the content in myriad ways.

Al Jazeera English has won its first Alfred I. duPont award for excellence in broadcast and digital journalism, announced the Columbia School of Journalism this morning. According to Columbia’s website, the prize is the “equivalent of the Pulitzer Prizes” for broadcast journalism.

The 5 Tenets of Open Journalism

from MediaShift
I’m not a middle-of-the-roader and wasn’t aiming for a compromise position with my discussion paper, “The Case for Open Journalism Now: A new framework for informing communities,” published early this month by the University of Southern California’s Annenberg Innovation Lab. Instead, I sought to identify and propel a culture shift that might build a healthier relationship among those who produce journalism and others who consume news and information.