Google Launches New Site With Resources for the 2012 Presidential Election 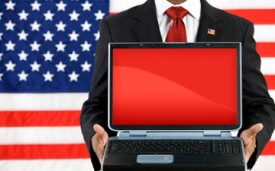 Keeping up with the 2012 U.S. election with Google.com/Elections

from The Official Google Blog by A Googler
From the nineteenth century?s pamphlets to the twentieth century?s TV ad revolution, our elections have always been shaped by how we communicate and consume information. There?s no question that the Internet is set to deliver more political information, opinion and news than any other medium throughout the 2012 U.S. elections. The web offers candidate and issue info to voters; networking and fundraising platforms for campaigns; and research and productivity tools for journalists.

Television for the 99% & Reverse Media Imperialism

from Savage Minds: Notes and Queries in Anthropology ? A Group Blog by Adam Fish

It is no surprise that American television news networks that consistently cover the Occupy Movement in detail tend to be liberal or progressive in political persuasion. Current TV?s Countdown with Keith Olbermann, Free Speech TV?s Democracy Now!, Russia Today?s The Big Picture with Thom Hartmann, and Al Jazeera English all spend considerable amounts of their valuable time bringing the voices of Occupy to televisions in America. Similar funding strategies and political intentions unify these four networks. Each receives cultural, political, or economic support from various national governments. With this communication power, these networks proceed to critique American capitalism and imperialism through direct discursive confrontation or through emphasizing resistance movements such as Occupy. I run the risk of sounding a little conservative by posing it but my question is: what is the cultural meaning of the presence of state-based, anti-capitalism television and internet video? From the successes in Wisconsin, to Wikileaks, Anonymous, and Occupy Wall Street we are living in a golden era for progressive television and internet video.

Americans Elect: A wild card for the Internet age

from washingtonpost.com – Op-Ed Columns by Ruth Marcus
Americans Elect is both impressive and worrying.

from WhirledView by Patricia H. Kushlis
By Patricia H. Kushlis
In a December 30 Newshour interview with Judy Woodruff, a group of five wavering Iowa Republicans described who they intended to support in the January 3, 2012 caucuses and why.  The whys ranged from thoughtful to questionable despite the fact the individuals had been carefully chosen by respected but unidentified educational and civic groups as articulate and informed Americans and also despite the fact that our news media has assured us that Iowans are better educated and more politically savvy than voters living in most other states.

from Savage Minds: Notes and Queries in Anthropology ? A Group Blog by Adam Fish
Many scholars, activists, pundits, and even a few politicians agree that American democracy is in trouble. Many reasons are given?the raw punch of money in elections, a distracted, apathetic, or misinformed population, the absence of civic education, the specter of blind patriotism, the penal threat and painful reality of police brutality. The signs of collapsing democracy are obvious: the debt ceiling debacle, the recent Supercommittee failure,Citizen United v Federal Elections Commission, a US Congress with 9% approval ratings. Our Occupy mobilizations, and our ?deeply democratic? (Appadurai 2001) methodology of the General Assembly inspired as it is by the anthropological knowledge translated through our colleague David Graeber, are reactions to the failure of the present incarnation of American democracy while exclaiming our desire, voice to voice, for a more humane social democracy.

from Global Voices Online by Kathryn Morgan
Mariné Pérez, 30, resident of Brooklyn, New York, did not hesitate at the moment of assuming the responsibility of coordinating the Spanish translation edition of the newspaper Occupy Wall Street Journal, the work of the movement that caused the occupation of the financial district in New York in September 2011. This Puerto Rican activist, with previous experience in the student struggles of the University of Puerto Rico and the University Sagrado Corazón, has been given the immense task of amplifying the voices of 99% through the effective use of pen and paper.