Eurobonds or ECB? Either way Germany has to pay the bill

by Open Europe blog team
As we argued in a recent papers which looked at the short term options for the eurozone, the option of risk pooling via Eurobonds, or the option of allowing the ECB to become the lender of last resort, both pretty much come down to German taxpayers underwriting the whole party.

from euro|topics
EU Commission President José Manuel Barroso plans to present proposals today for the introduction of euro bonds, a plan German Chancellor Angela Merkel continues to reject. Merkel is putting the future of the Eurozone in jeopardy with her blockade mentality, some commentators write, while others fear common bonds will only lead to more debts.

Greater intervention by the ECB raises more problems than it solves

by Open Europe blog team
Over on the FT A-list we’ve got a response to a piece by George Soros and Peter Bofinger, who are calling for the ECB to act as full lender of last resort to struggling eurozone member states. As regular readers of our blog and comment pieces will know, we’re firmly against this course of action, as we believe it would throw up huge questions over the credibility and independence of the ECB (both vital if the eurozone has any hope of surviving). It would also likely make Germany question its membership in the eurozone. See below for our full response (we’d recommend reading the Soros and Bofinger piece here as well):

The Eurobonds of Barroso will do more harm than good

from Blogactiv by Protesilaos Stavrou
In his last speech in front of the European Parliament, the President of the European Commission, Jose Manuel Barroso, promised to bring plans for eurobonds. For what he called ?stability bonds?. These eurobonds will be jointly issued and separately guaranteed by all euro member-states. In addition they will be accompanied by a series of institutional reforms, transferring more power to European institutions, while offering the ability to the Commission to impose penalties on states that fail to comply with the budget rules. Among these penalties will be the imposition of sanctions, the suspension of community funding and even the temporary withdrawal of voting rights.

Europe in Blogs and Social Networks @ #ViaEU ? Going local instead of European?

from Ideas on Europe by Ronny Patz
There was one question/remark by a professor who attended my talk on ?Europe in Blogs and Social Networks? yesterday ? the pre-workshop blog posts are here and here ? that quite hit the nail on the head.

from FT.com – World, Europe
German chancellor sees political solution, not ‘Eurobonds’, as the only way to restore confidence and resolve the crisis

Remember the Real Values of the European Project

from Atlantic Community RSS-Feed
Mikel Kotonika: With the Eurozone at the center of the global financial crisis, EU leaders are desperately trying to find a workable solution to preserve it. But if they use the imposition of a two-tier system, or other drastic measures, they will save the Eurozone at the expense of the European project as a whole

from euro|topics
Despite growing pressure from the financial markets, Greece has no alternative to the euro, the new independent Prime Minister Lucas Papademos said on Monday in his first government statement. In Italy the economist Mario Monti – also independent – is now pushing for a quick formation of government. But just being independent is not a panacea against the crisis, commentators write, and demand decisive action from the two technocrats.

While Rome was burning: Berlusconi and the politics of Italy?s patronage, Andrea Teti

from open Democracy News Analysis – by Andrea Teti
On the day of his resignation, many in Italy held up signs saying “game over for Berlusconi”. On the contrary, this is where the game begins, says Andrea Teti.

from cafebabel.com by Georgios Kokkolis
by Georgios Kokkolis, political scientist
Whether or not George Papandreou?s decision over a Greek referendum was correct or not, is certainly a matter that will torture the historian of the future. Is Papandreou an exceptional mind or a dangerous idiot?

ECB and democracy: The traps of debt monetization

CDU for Europe and Germany

by Grahnlaw
Despite too little and too late, why is Germany more influential than the UK in the European Union?

Imagine the Conservative party conference in the United Kingdom under the motto: For Europe. For Britain.

In Germany the the theme of the main government party, the Christian Democratic Union CDU meeting in Leipzig is: Für Europa. Für Deutschland.

from open Democracy News Analysis – by antiuk.wordpress.com and Tom Akehurst
Britain is a democracy, with freedom of speech and the right to protest. There is no need to be ‘disruptive’ and uncivilized’ in order to make your voice heard. What a comforting myth!
As the students come back to the streets to protest the government?s privatisation of universities, and theOccupy protest continues outside St Paul?s, mainstream politicians seem unprepared to concede that such direct and disruptive action is necessary or legitimate. Mainstream opinion offers little more than knee-jerk horror at occupied buildings, off route marches, the disruption of business as usual.

from open Democracy News Analysis – by David Beetham
Last summer, Democratic Audit published an explosive paper on the growing influence of the corporate and financial sectors on British democracy. OurKingdom is publishing a series of updates on the paper, of which this is the first.

A new Ukrainian electoral law vs conclusions of the Venice Commission

from Blogactiv by Viktor Tkachuk
On November, 17 Verkhovna Rada of Ukraine adopted a law ?About Elections of Members of the Parliament?.  Lawmakers didn?t include recommendations of the Venice Commission (VC) in this new law.  And the Commission was mostly concerned by three key innovations: 1) introducing a mixed electoral system instead of the current proportional system; 2) lifting the election threshold from 3% to 5%; 3) removing blocs of political parties from the elections.

Fair and supervised Economic Governance applies to everyone except the EU, says the Commission

from Blogactiv by David
The European Commission?s new proposed Regulation 2011/0386 for monitoring draft budgetary plans of Member States applies to everyone in the Euro area but not the European Union. For the Commission, the Council of Ministers and the Parliament OPAQUE rules apply.

by Open Europe blog team
The EU/IMF/ECB troika released a statement on its second review of the Portuguese bailout this afternoon. It was more or less what was expected, with a deeper recession forecast for next year (GDP contracting by 3%) and fears over some over-spending, particularly regionally, which could result in the country missing this year?s deficit targets. Other than that it was light on detail and heavy on the platitudes as with most EU statements these days. (We?ll bring you a full analysis of the report once it is released).

from euro|topics
The economist Mario Monti was sworn in as Italy’s new prime minister on Wednesday and has appointed a cabinet consisting exclusively of experts, without politicians. The political class may have failed miserably in the crisis, but it was experts like Monti that made the crisis possible in the first place, commentators write.

What can Greece?s Debt Crisis contribute to some EU Integration Theories?

from Ideas on Europe by parableoftheelephant 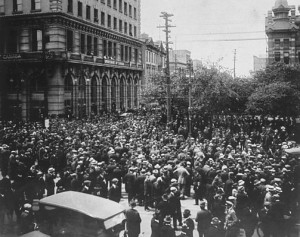 The fall of Berlusconi?s reign

from euro|topics
While economists now govern in Italy and Greece and the Troika’s financial experts control Portugal and Ireland, thousands of people have taken to the streets to protest against the undemocratic rule of technocrats. While some commentators warn that the protesters are whipping the wrong horse, others see a European Federation and a constitution voted on by all the citizens of Europe as a solution to the democracy dilemma.

Merkel and Cameron on EU and euro

EU: Can expansionary budgets save us from hardship?

by Grahnlaw
Should Europe spend its way out of gloom and ever slowing growth? Are there real alternatives to the so called austerity measures, actually efforts to reduce government borrowing and eventually total debt to sustainable levels?

from euro|topics
The conservative People’s Party won an absolute majority in Spain’s early parliamentary elections on Sunday. Commentators say prime minister designate Mariano Rajoy must be quick to introduce reforms as the clear victory of the conservatives could help save the euro.

A few brief thoughts on the Spanish election