Skip to content
Van governor calls for urgent aid
from Hurriyet Dailynews by VAN
As search and rescue operations in the eastern province of Van draw to a close, falling temperatures and extreme weather conditions in Van have already taken their toll on the quake victims.

from Hurriyet Dailynews by ISTANBUL – Hürriyet Daily News
The consecutive 7.2- and 5.6-magnitude earthquakes have putTurkey to a major test in disaster management. Yet, civil defense experts say Turkey has failed in providing the necessary coordination management 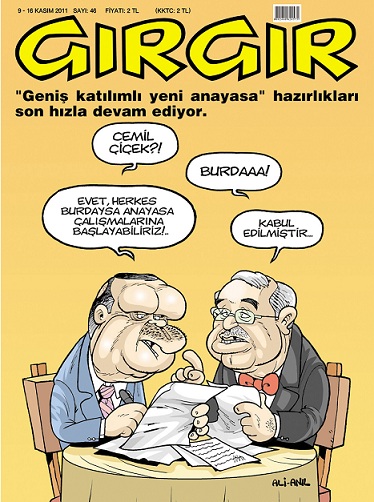 from Today’s Zaman, your gateway to Turkish daily news :: Columnists by FATMA DİŞLİ ZIBAK
One of the most heated topics taken up by Turkish columnists over Eid al-Adha was the recent police operations targeting the Kurdish Communities Union (KCK), an organization that includes the Kurdistan Workers’ Party (PKK) and its affiliated groups.

from Hurriyet Dailynews by HDN
News from Turkey is constantly changing at a dizzying pace, but a new and permanent paradigm is arising: a strong ruling Justice and Development Party (AKP) and the maturing of a two party system.

Turkey will not allow KCK to create a parallel state, Erdoğan says

from Hurriyet Dailynews by HDN
Turkey will not allow the establishment of a parallel state such as the one allegedly planned by the KCK) PM Erdoğan said in Istanbul this morning.

from Yahoo news
The recent surge in Turkey’s military actions against the Kurds in northern Iraq is an indication that, somewhat surprisingly but not entirely unpredictably, Turkish foreign policy has undergone a 180-degree turn in less than two years. The Turkish offensive is also an indication that these changes go beyond the current tensions between Turkey and Israel, which are just one facet of much deeper

from Today’s Zaman, your gateway to Turkish daily news :: Columnists by FATMA DİŞLİ ZIBAK
A probe into the Kurdish Communities Union (KCK), the urban arm of the terrorist Kurdistan Workers? Party (PKK), gained new heights with the arrests of publisher Ragıp Zarakolu and Professor Büşra Ersanlı this week.

from Today’s Zaman, your gateway to Turkish daily news :: Columnists by ETYEN MAHÇUPYAN

Erdoğan’s all-out advance on the PKK

from Hurriyet Dailynews by HDN
Turkish Prime Minister Recep Tayyip Erdoğan has been in Germany for the last two days to mark the 50th anniversary of the beginning of the Turkish workforce?s contribution to Germany?s industrial revival after World War II.

from Yahoo news
Turkey has boosted the budget of its National Intelligence Organization (MIT) in response to public anger over the death of two dozen Turkish soldiers in a recent battle with the PKK, Press TV reports.

from Hurriyet Dailynews by ISTANBUL – From wire dispatches
An Istanbul prosecutor today charged seven suspects with ‘disrupting the unity of state,’ in a probe into the shooting of singer İbrahim Tatlıses.

Kurds in Turkey Rended by War That Haunts Country

from NYT > Turkey by By LIAM STACK
Many Kurds feel caught between a guerrilla movement fighting for minority rights and local autonomy and a Turkish government that says it wants peace, but fears carving up the country.

from open Democracy News Analysis – by Djene Rhys Bajalan
AKP?s success has been based on its domination of the Turkish centre ground, and if that centre ground is against making concessions to the Kurds, it will be hard for the party to move any further than it has, even if it wants to.

The AKP and the ?Kurdish Problem?

by Jenny White
Jadaliyya just published a very good interview with Asli Bali, professor of law at UCLA. The link is here. It begins with a clear and comprehensive account of the history of the Kurdish problem? in Turkey. Then gives video and a transcript of the interview with Bali. Bali tries to understand why the AKP, which showed such a promising openness to Kurdish rights and interest in civilianizing Turkey  in 2005 has now reverted to standard ultra-nationalist response, militarizing the Kurdish issue, including civil society with the recent wave of arrests of civilian intellectuals and academics. Bali also discusses whether the military or AKP are responsible, suggesting that the recent arrests of civilians were by the police, most definitely under the control of the government. Here?s an excerpt:

from Today’s Zaman, your gateway to Turkish daily news :: Turkish Pre by AHMET ALTAN
The Kurdistan Workers’ Party (PKK) has killed civilians again. An innocent family, including a man, his wife and their daughter who went for an outing on Saturday afternoon, was killed by a suicide bomb strapped to a woman’s body in Bingöl, a province in the mainly Kurdish Southeast.

from Today’s Zaman, your gateway to Turkish daily news :: Columnists by FATMA DİŞLİ ZIBAK
Over the weekend Turkish columnists offered their opinions on reactions to last week’s government announcement that all official celebrations to mark Oct. 29, the anniversary of the founding of the Turkish Republic, were called off due to an earthquake that killed more than 600 people in the eastern province of Van.

How to get over the deadlock in the Kurdish issue

by MARKAR ESAYAN
A second wave of arrests in İstanbul as part of the Kurdish Communities Union (KCK) investigation has created much controversy.

from Hurriyet Dailynews by HDN
In the fight against the outlawed Kurdistan Workers? Party (PKK), it is the political establishment that determines the role of the Turkish Armed Forces (TSK) like all other government bodies.

from Hurriyet Dailynews by ISTANBUL – Hürriyet Daily News
Parliamentary Speaker Cemil Çiçek has outlined the steps that will be taken to draft a new charter during a press conference this morning in Ankara.

from Today’s Zaman, your gateway to Turkish daily news :: Turkish Pre by Nazlı Ilıcak Sabah
Prime Minister Recep Tayyip Erdoğan?s promise to demolish poorly constructed buildings following the destruction caused by the quake in Van on Oct. 23 has led some to ask: ?Why did the government wait so long to take action??

by FATMA DİŞLİ ZIBAK
Most Turkish columnists think the arrests that have been made as part of an investigation into the Kurdish Communities Union (KCK), an umbrella group that allegedly encompasses the terrorist Kurdistan Workers? Party (PKK) and its affiliated organizations, have caused controversy and reaction mainly because the distinction between thought and a criminal or violent act is being overlooked in these arrests.