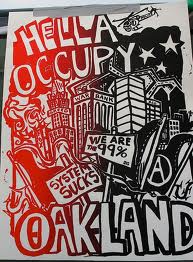 Occupy Oakland: photos before and after violent police raid

from open Democracy News Analysis – by C. S. Herrman
As the latest movement of the 99% take to the streets, one important underlying concept we need to grasp about the global decadence in which we live is the corruption of stewardship.
That some should be rich, shows that others may become rich, and, hence, is just encouragement to industry and enterprise. ? Abraham Lincoln
Your morals are exempting you from guilt and shame. Heaven knows you’re not to blame   ? Mr. Businessman, Ray Stevens
We have seen enough now to realize that the initial media reports were substantially under-informed when not patently false. Occupy Wall Street and its clones here and abroad were portrayed as a welter of half-baked platitudes and half-understood plaints. That mischaracterization has been superseded by the slogans of the protesters themselves, which name names, crisply announce clear and distinct accusations, all of them aimed, the world around, at the one percent that has secured the ability to enforce its privileges at the expense of the ninety-nine percent. The establishment message remains, ?Go back to work and stop bothering the status quo?. The protesters are having none of that, preferring publicly to vow that the power brokers and their media puppets shall one day be forced to acknowledge the makings of a tinderbox of fissionable material.

Church, city, media: how the message of #OccupyLondon is being disrupted, James Mackay

from open Democracy News Analysis – by James Mackay
OccupyLondon’s encampment is facing eviction from outside St Paul’s cathedral. The Church of England and City of London Corporation are in turmoil. Meanwhile, the media frenzy is in danger of drowning out the message of the occupation.

from open Democracy News Analysis – by Hilary Aked
The City of London Corporation has dropped its threat to evict ‘tent city’ at St Paul’s Cathedral. Negotiations are on, but occupiers are wary of being transformed into a mute tourist attraction.
It’s two and a half weeks into the Occupy movement’s London incarnation, the St Paul’s tent city, and the City of London Corporation has dropped its legal bid to force a violent eviction of the campers. Realising that thousands of people would arrive to defend the space and an ugly PR disaster would ensue, it is now trying to negotiate a deal.

Occupy Wall Street Gets Its Own Social Aggregator

Jeremy Brecher: The 99 Percent Organise Themselves (The Nation, USA) | via Peter Waterman

Speakers in order of appearance:
Heather Marsh. As Georgie she has been writing about the revolution since before the beginning, starting with A Stateless War in September 2010. As editor/administrator of WL Central, she has created a community for activists around the world to provide a new hard news organization, covering only the news people require in order to govern themselves and working towards the Wikileaks model of scientific journalism. This is an ongoing project that is about to get a lot bigger, building off of everything learned in the last year.

from anthropologyworks by admin
By contributor Sean Carey
?My congratulations to the encampment outside St Paul?s for sending almost the entire British establishment into a tizzy every bit as confused as some of the protesters themselves,? writes Andrew Rawnsley in the Observer. The left-leaning newspaper?s award-winning chief political commentator goes on to express his amazement about the massive impact a small group of young, middle-class men and women equipped with nylon tents and hastily-made banners can have on the country as part of an anti-capitalist protest which has now spread to around 900 cities worldwide.

QUESTION: Is the Occupation of Foreclosed Property useful?

from Global Guerrillas by John Robb
Here’s a question for all of you open source warfare/protest theorists.  Looking for ideas on how the occupation of foreclosed/abandoned property (from factories to homes) can expand/grow the protest.

What if the Occupy movement is not just about holding demonstrations in public places? What if its real impact is the ability to empower and unite communities to identify their own problems, propose their own solutions, and take matters into their own hands? Meet the Oakland Commune. (Photo right:  Oakland Occupy Wall Street, hella occupy).
Oakland ? Radical Po