Papandreou to step down, interim cabinet to take charge (News)

from European Voice – RSS – News & analysis
Despite victory, Greek prime minister is expected to step down to make way for national unity government; participation of centre-right opposition in doubt.

by Grahnlaw
Where are we now? The FT Eurozone crisis live blog continued to offer excellent coverage 4 November 2011, including the G20 summit in Cannes. There you have a recap of the whole day until late afternoon, if you stand reading the updates upwards from the end.

by Julie Owono
[All links in are in French unless otherwise indicated]
During the night of November 2, 2011, the Paris head office of satirical weekly Charlie Hebdo was attacked with petrol bombs [en] and burnt down. The long established and always provocative French weekly had published a satirical ?Sharia Weekly’ on current events in Tunisia and Libya on the same day, featuring the Muslim Prophet Muhammed as its ?guest editor’, with this tagline: ?Sharia weekly: 100 whip flogs if you do not die from laughter? 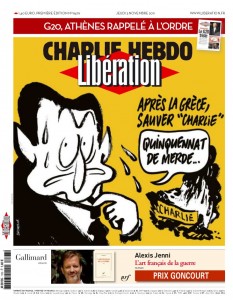 “And now, on top of Greece, I have to save Charlie” – French daily Liberation cover, drawn by Charlie Hebdo cartoonists – November 3, 2011.
On day two after the blaze and

from FT.com – World, Europe
PM signals he may stand down after forming coalition government to take the country to elections early next year

from Hurriyet Dailynews by HDN
Many Europeans are angry at Greek Prime Minister George Papandreou?s decision to call a referendum on the EU?s bailout package for his nearly bankrupt country. Greeks, however, have a right to decide their future as much as anyone else in Europe.

The European Commission today broke a taboo by not rejecting the assumption that Greece may leave not only the eurozone, but also the EU, because current treaties do not provide an exit from the euro.

by Daniel Gros
BRUSSELS -? A central bank always has a crucial role to play in a financial crisis. But the European Central Bank?s role within the eurozone nowadays is even more ?central? than that of the Federal Reserve or the Bank of England.

by ATHENS – Reuters
Greece has dropped its plans to hold a controversial referendum on the country’s euro zone membership, which had threatened to plunge the bloc into a crisis, the country’s finance ministry said today.

George Papandreou can also ruin us

by HDN
The situation in Greece is heart breaking. Billions of dollars of European financial assistance has been given to this country since the 1980s. The country has reached an unbelievable level of development. Its people became richer. They came to a welfare point envied by us all.

The ‘R-Word’ between Greece and Germany

by HDN
Europe?s leaders were shocked when Greek Prime Minister George Papandreou announced his intention of holding a referendum on a debt deal reached with the European Union.

by Open Europe blog team
Over on his BBC blog Robert Peston cites some of our figures on the shares of Greek debt, so we figured we’d put up our full break down of who owns Greek debt. Given the problems in Greece its interesting to see where the debt is held and who could be exposed to losses in a disorderly default.

by Grahnlaw
Forget about Alice in Wonderland when prime minister George Papandreou, starring the Greek Dra(ch)ma of domestic politics, overshadows the sideshow of the G20 leaders in Cannes. Markets around the world have barely stopped shaking.

A Greek referendum WAS an excellent idea, Anthony Barnett

from open Democracy News Analysis – by Anthony Barnett
There was for a moment a breath of democracy in the crisis of the European currency and an attempt at honesty. But the Greek referendum was not to be. Since when was it that you could be in the EU like Denmark or the UK and not in the Euro; but that if you left the Euro you would have to exit the EU as well? This was heavy duty blackmail.

from euro|topics
Greek Prime Minister Giorgos Papandreou on Thursday cancelled his plan for a referendum, clearing the path for negotiations with the opposition. Papandreou did not rule out the possibility of resigning should it facilitate the formation of a transitional government. He is not the leader Greece needs right now, some commentators write. Others call on citizens all over Europe to participate in solving the crisis.

from euro|topics
Greek Prime Minister Giorgos Papandreou on Thursday cancelled his plan for a referendum, clearing the path for negotiations with the opposition. Papandreou did not rule out the possibility of resigning should it facilitate the formation of a transitional government. He is not the leader Greece needs right now, some commentators write. Others call on citizens all over Europe to participate in solving the crisis.

Greece vs Germany: Battle of the Referenda 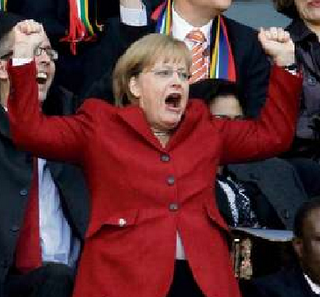 by Grahnlaw
Each of the Europan finance ministers fights a war for stability (and sustainable growth propects) on the home front, intrinsically linked with the efforts in the other EU member states, at European Union (eurozone) level and globally.

by Grahnlaw
We have looked at the background and gaps and filled the Ecofin file with recent EU and eurozone statements. We are anxiously eyeing Greece, but we also know that we are all aboard the Greek rollercoaster on the slopes of the Apennines.

Should we feel sorry for Greece?

from BBC News | Europe | World Edition
Should we feel sorry for Greece, or angry?

“Papandreou ? another one bites the dust” by Andrew Watt

from Social Europe Journal » Blogs by Andrew Watt
Greek Premier Papandreou joins his Irish and Portuguese counterparts, Brian Cowen and José Sócrates. Having wielded the axe at the bidding of the Troika he now finds himself on the chopping block. Those insisting on the need for austerity and painful structural reforms make frequent reference to

by Grahnlaw
I presume that the finance ministers meeting in the Euro Group and Ecofin 7-8 November 2011 already have these additions to the Council background note in their files. Perhaps others would like to be spared the tedious search.

from Ideas on Europe by Protesilaos Stavrou
As time passes the crisis in the euro area gets worse. Italy is being forced to borrow at forbiddingly high interest rates, despite the constant intervention of the European Central Bank, while doubts are growing over the ability of France, the eurozone?s second largest economy, to hold on to its excellent credit rating (AAA) given the exposure of its banks to the European South?s debts and its unsafe fiscal finances. The mere announcement of the Greek Prime Minister, George Papandreou that he was willing to put to a referendum the new bailout package for the country, was enough to plunge international markets into greater uncertainty. There are four fundamental conclusions deriving from the events that recently took place that are worth pointing out.
Firstly the resulting chaos in the markets reaffirmed, in a clear manner, the systemic structure of the c

by Grahnlaw
The finance ministers of the Euro Group meet to ride the Greek rollercoaster on the slopes of the Apennines, well after markets open and close in Europe Monday, 7 November 2011.

Are we going to see solutions emerging in Greece and Italy ahead of the eurozone meeting and the full Ecofin Council on Tuesday?

A Greek referendum was, in fact, a bad idea, Takis S Pappas

Papandreou’s embattled, but Berlusconi’s king of no confidence 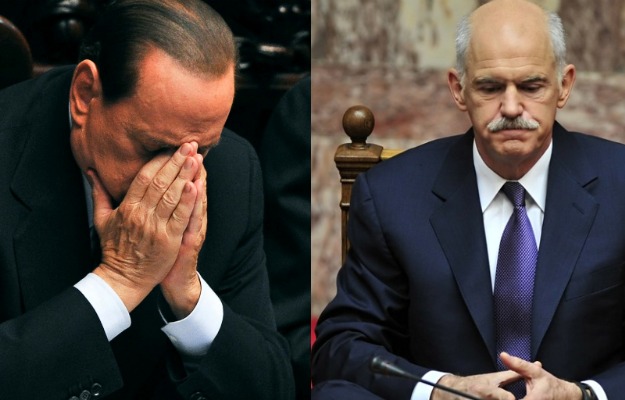 We’re only hours away from knowing whether Greek Prime Minister George Papandreou, caught between fuming European creditors and enraged Greek citizens, will survive a confidence vote (or “no confidence” vote, if you’re a glass-half-empty type). So far this year, the parliamentary motion, which enables legislatures to express whether they still have confidence in the appointed government, has felled the administrations of Canada’s Stephen Harper, Slovakia’s Iveta Radicova, and Slovenia’s Borut Pahor (The first ever victim? British Prime Minister Lord North in 1782.)

There?s nothing more frustrating than watching this endless cycle of stupidity unfold. Sometimes it?s just more dignified to face death rather than fight it.
To regular readers, it will sound like a tiresome cliché by now, but the fact that capitalism never solves its own crises was driven home once more last week by the outcome of the much-anticipated European Union crisis summit in Brussels on Wednesday. Yet again, European leaders managed to stave off an immediate catastrophe by buying themselves some extra time. But, yet again, the fundamental problems remain unresolved.
Here?s a list of pointsthat European heads of state agreed upon:

from Middle-Class Death Trips by Chris Newfield
Hat tip to Brad for the headline that summarizes the whole “problem” created by the Greek government putting the Poverty Now plan-of-the-week to save-punish Greece to an actual vote:  “Democracy Wipes Out Gains for Stocks.”