Like PKK’s Hakkari assault, i have not learnt the earthquake thru internet. My brother called me and asked me how I was as the quake was felt from Diyarbakır, too. However, I was about to arrive Diyarbakır from Mardin when the quake happened so i did not feel anything… There isn’t much accurate news and people are calm in Diyarbakır but more than 1000 are expected to be dead by now…

Death toll could be up to 1,000 after magnitude 7.2 earthquake strikes Van province, bringing down buildings, officials say

Up to 1,000 people are feared dead in a powerful earthquake in eastern Turkey, according to initial estimates.

Turkey’s Kandilli Observatory said the death toll could be between 500 and 1,000. At least 35 buildings are reported to have collapsed.

The earthquake, with a preliminary magnitude of 7.2, struck in the Van province near the Iranian border on Sunday. The epicentre was below the village of Tabanli, near the city of Van. 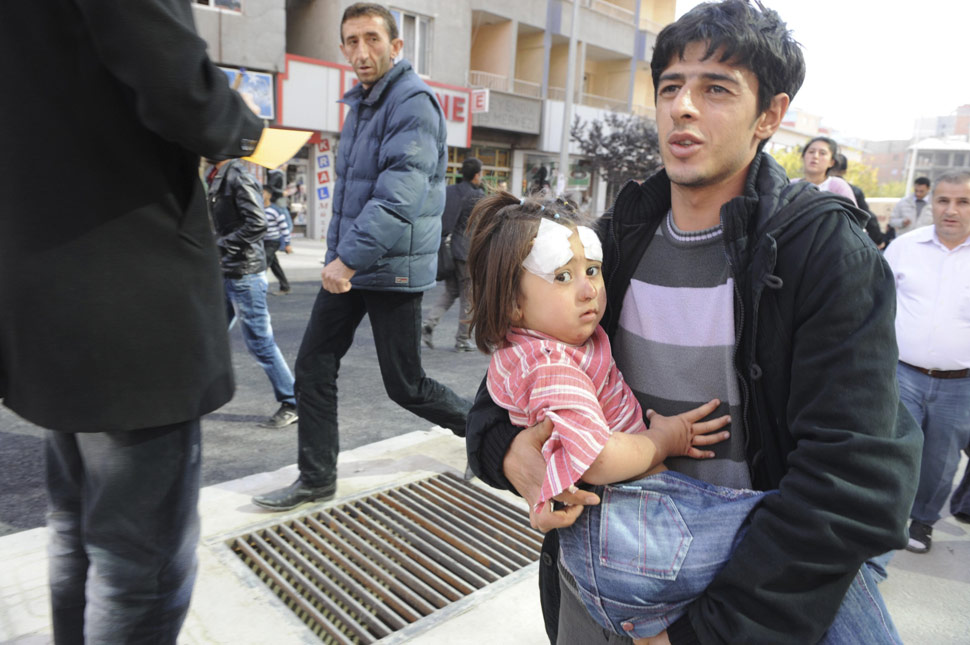 A man carries an injured girl after an earthquake in Tabanli village. REUTERS/Abdurrahman Antakyali/Anadolu Agency.

Turkey’s Kandilli Observatory estimates that some 500 to 1,000 people were killed in a powerful earthquake in southeast Turkey’s Van province on Sunday, broadcaster CNN Turk reported. Separately, Deputy Prime Minister Besir Atalay told reporters some 10 buildings had collapsed in Van city and around 25-30 buildings collapsed in the nearby district of Ercis. The USGS estimates the quake magnitude at 7.2, with a depth of 20 km (12.4 miles), 17 km (10 miles) NNE (32°) from the city of Van.

Israel offers aid to Turkey in wake of massive earthquake

from Hurriyet Dailynews by Haaretz

Israel has offered to aid the Turkish government in any way it can after a massive earthquake shook the Turkey’s east, Israeli Defense Minister Ehud Barak said.

A massive earthquake with a magnitude of 7.2 hit eastern Turkey a few hours ago. Up to 1,000 people could be feared dead from the quake, which hit Ercis, in the mountainous province of Van close to the Iranian border, the hardest.

As many as 1,000 people are feared dead after a 7.2 magnitude earthquake hit south-eastern Turkey, destroying dozens of buildings and trapping some victims alive under the rubble