According to data compiled by bianet, 24 women were killed by men in June this year. 13 women were raped, 20 women harassed and eleven women were injured. Most registered cases of violence took place in Istanbul. 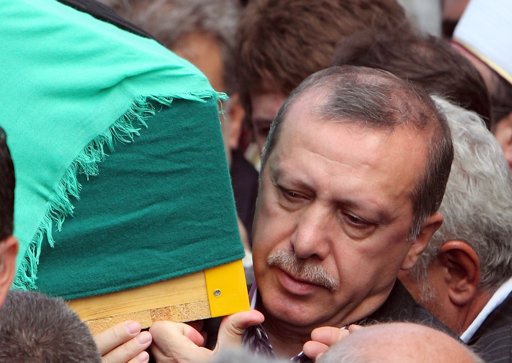 Turkey’s Prime Minister Recep Tayyip Erdogan (R) carries the coffin of his mother Tenzile Erdogan during her funeral in Istanbul October 8, 2011. Erdogan’s mother died in an Istanbul hospital on Friday, prompting a delay in his planned weekend trip to the Syrian border, officials from his office told Reuters. Tenzile Erdogan, who was in her 80s, had undergone an operation to remove her gall bladder and died on Friday morning, state-run Anatolian news agency reported. REUTERS/Osman Orsal

By AP, ISTANBUL ? The Dogan news agency says thousands of people have attended the funeral of the mother of popular Turkish Prime Minister Recep Tayyip Erdogan. Tenzile Erdogan, who was 83, died in a hospital on Friday, days after a gall bladder

All human beings react the same way when they face death. Nothing is left apart from our grief, a grief that is infinite like the universe and impossible to be shared or lessened. In the face of God, this grief makes us all equals.

Turkish Prime Minister Tayyip Erdoğan’s mother, Tenzile Erdoğan, has died in an Istanbul hospital where she was receiving treatment today.

Israeli President Shimon Peres has sent a letter of condolence to Turkish Prime Minister Recep Tayyip Erdogan on the death of his mother, the Anatolia news agency reported Monday.

from EurasiaNet.org – Turkey by k_kumkova

Turkish government leaders have made reducing the military?s role in politics one of their top domestic priorities. But there is one area where the politicians appear reluctant to confront the generals ? providing draft exemptions for conscientious objectors.

After a ten-day hunger strike, conscientious objector İnan Süver decided to turn his strike into a death fast. His reasons: oppressions experienced at the Balıkesir Prison and the dismissal of his requests for his transfer to a different cell.

by Hürriyet Daily News
The government may eventually consider a paid military service exemption for would-be draftees, Turkey?s prime minister has signaled as the main opposition quickly resubmitted to Parliament a bill to that effect.

Turkish cinema had its time of cowboys and aliens as well

by ISTANBUL- Hürriyet Daily News
While the much anticipated Hollywood movie ?Cowboys & Aliens? hits the movie theaters, we remember the cowboys and aliens of Turkish cinema.

from Hurriyet Dailynews by ANKARA – Anatolia News Agency
Cigarette production and sales volume in Turkey have seen a significant decline in recent years, according to figures provided by the Tobacco and Alcohol Market Regulatory Agency, or TAPDK.

from Hurriyet Dailynews by Göksel Bozkurt – ANKARA
A recent report reveals that gender equality in terms of education and income is high in Turkey. Accordingly, there is almost a 30 percent gender-gap-based inequality between the sexes in the country and more than a quarter of married women in the lowest income bracket lack control over the money they earn.

from Hurriyet Dailynews by MUĞLA – Dogan News Agency
The Muğla Development Movement group, founded in 1999, aims to begin a new project with the goal of establishing a new open-air library in the southwestern province of Muğla.

from Hurriyet Dailynews by ISTANBUL- Hürriyet Daily News
Some 2,000 were reported to drop out of school daily in Turkey, according to a recent report. 40 percent of girls and 25 percent of boys between 15 and 19 are also reported to be neither working nor studying.