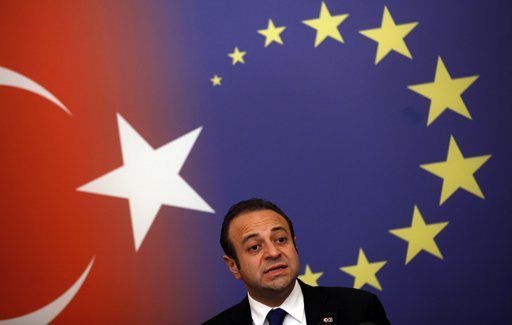 Turkey’s European Union Minister Egemen Bagis speaks during a news conference in Istanbul October 12, 2011. European Union candidate Turkey’s only goal in talks with the bloc is full membership and no other options are acceptable, Turkish EU Minister Egemen Bagis told a news conference on Wednesday after the release of the latest EU progress report. The Commission urged the European Union to continue talks with Turkey but said no progress was achieved in the last year, adding that it was concerned about tensions between Ankara and EU-member Cyprus. REUTERS/Murad Sezer

by Istanbul – Reuters
European Union candidate Turkey’s only goal in talks with the bloc is full membership and no other options are acceptable, Bağış says.

from Yahoo news
(ISTANBUL ) – Turkey on Wednesday likened the European Commission’s yearly report on its EU entry prospects to a “camera” which focuses on many areas in the country, urging Brussels to “change the lens.”

Turkey and the EU: time for priorities

by Yavuz Baydar
With the new Progress Report on Turkey, two opposite observations on the state of affairs seem to remain equally valid: a) The prospects for a ?marriage? look bleaker than in previous years, mainly due to deliberate and destructive blocking efforts by a couple of EU members’ administrations; and b) Turkey is maintaining the momentum and continues to ?sufficiently fulfill the criteria? in sync with the rather concerned, but wise, European Commission.

by HDN
Turkey is a key country for the European Union. It is therefore disappointing that there has been so limited progress in the accession process over the last year. This is a source of frustration to both sides, as we are insufficiently exploiting the strong political and economic ties that already exist between us.

Violations of press freedom are serious, according to EU

by HDN
Sections concerning freedom of expression and media freedoms in the European Union?s 2011 progress report on Turkey assesses developments of the past 12 months and take up more space than last year?s report.

Is the EU still relevant for Turkey?

by ÖMER TAŞPINAR
The European Union has clearly lost its relevance and soft power in Turkey. The fact that the most recent progress report coming from Brussels did not trigger a serious discussion in the country shows that the majority of Turks simply do not care what the EU thinks of their country.

EU membership is a means, what we need is democracy

The 2011 European Union Progress Report was released last week. If I am not mistaken, this is the 14th such report.

by ANKARA – Reuters
Turkey said France should confront its colonial past before giving lessons to others on how to face history, in an angry response today to a call by President Nicolas Sarkozy for Ankara to recognize the 1915 massacre of Armenians as genocide.

by JOOST LAGENDIJK
Never a dull moment with Recep Tayyip Erdoğan. After having won many hearts and minds in the Arab world, the Turkish prime minister continued to the Balkans and South Africa last week, presenting Turkey as a confident new player on the world stage. Read the international media coverage of these visits and you can see how big the impact is of this Turkish soft power offensive.

For Europe, a Bridge Too Far to Turkey

With Turkey increasingly portraying itself as a regional power in the Middle East, it no longer looks like an idealized bridge to a world beyond clashes of civilizations.

Turkey entered into ?antigazpromovskij front?: review of the Turkish MEDIA

Turkey?s Energy Minister Taner Yıldız stated that his country would not renew gas agreement with Russia, signed during the Soviet period, in 1986, and wait in the near December. Ankara, however, renounces all imports gas from the North.

The Arab Spring and the academic world

by BERİL DEDEOĞLU
A number of conferences and meetings are being organized nowadays to discuss the ongoing social and political restructuring in the Arab countries. Some of these gatherings are on a governmental level, while others bring together academics, representatives of NGOs and journalists. Most of these meetings have the expression ?Arab Spring? in their titles.

Bashing the Greeks instead

by JOOST LAGENDIJK
For me, writing about Islamophobia in Europe has always been a complicated balancing act. On the one hand, I want to show how extreme right populists are using anti-Islam rhetoric to win votes.

Geo-ontologically the Balkans falls at the crossroads between the heartlands of Turkey?s Anatolia and Europe.

from AL JAZEERA ENGLISH (IN DEPTH)
Critics say Turkey’s Syria policy doesn’t work because Assad is not reforming – but the critics are wrong.

by ABDULLAH BOZKURT
This is the second time I am writing a ?regress report? to address the progress the EU has failed to make in a number of areas with regard to its obligations to Turkey. It is a cynical way of approaching the annual EU progress report, which will be officially unveiled on Wednesday, and will hopefully serve as a reminder of Brussels? unfulfilled promises.

from Today’s Zaman, your gateway to Turkish daily news :: Columnists by SUAT KINIKLIOĞLU
This week was EU week. The ?non-progress report? reminded all of us that our country was in a negotiation process with the ailing European Union. I have somewhat cooled toward the EU and have been entertaining doubts whether joining the EU is in Turkey’s interest or not. While there is no doubt that Turkey should feel indebted to the EU anchor for igniting Turkey’s reform dynamics in the early 2000s, the process has unfortunately turned into a game of mutual frustration. While there are many in Turkey who wish the EU would collapse and disappear, I am told that the EU is likely to muddle through, albeit at a disappointingly slow pace.