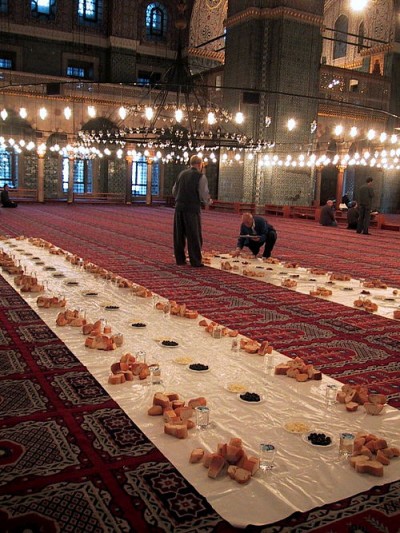 Ramadan drummer of Istanbul hopes the beat will go on

Just after two o’clock in the morning, Carli arranges his red velvet costume one last time. “The first night is always exciting”, he says.

On every corner of İstanbul an iftar table this Ramadan

Muslims celebrate the first day of Ramadan in Istanbul | Demotix.com

The tradition of breaking the daily fast at sunset during Ramadan turns Istanbul’s Sultanahmet district into a festival, reports the Hurriyet Daily News. And the tradition is continuing this year, reports staffer Çagla Pinar Tunel, who describes

The rooftop bars, restaurants, or terraces in Istanbul are a great way to take in the view and enhance city?s dramatic effect

Municipalities plan fast-break tents for Ramadan
Hurriyet Daily News
With the beginning of Ramadan,the Islamic holy month of fasting, many municipalities in Istanbul set up tents to provide breaking-meal for thousands. ?People could socialize in outdoor fast-breaking dinners on the city’s streets, at concerts

This story was amended on 7/30/11. Private donors, rather than the Greek government, finance Şişmanoğlu Megaron.

Istanbul’s Sabiha Gökçen Airport is the world’s fastest growing airport, according to a new report released by Airports Council International (ACI) August 1. The World Airport Traffic Report 2010, which analyzed the performance of over 1300 airports in

Istanbul Modern is hosting the world premier of Steve McCurry’s photography exhibition, ‘The Last Roll of Kodachrome,’ between Aug 3 and Sept 4. The images were taken with the last roll of Kodachrome McCurry took pictures of people from the Rabari

COM Art Beat Istanbul is a new contemporary art fair from Sept. 14-18. The annual event, which coincides this year with the opening of the 12th Istanbul Biennial (Sept. 17 ? Nov. 13), will be a new platform for Turkish contemporary art.

The actor was spotted wearing his Biebs hair in Istanbul’s Sultanahmet Square where he met with the city’s Mayor Mustafa Demir. Ben is currently scouting the plaza for his upcoming directorial project Ago, starring himself, Bryan Cranston, John Goodman

Istanbul’s Sultanahmet gathers everyone for tradition of fast-breaking

DAILY NEWS photo, Emrah GÜREL Istanbul residents and tourists flocked to the city’s historical peninsula for the end of the first day of Ramadan, enjoying a spectacular atmosphere created by the mosques and the lighting. ?Every year, I come here to

Istanbul Modern is hosting the world premier of Steve McCurry?s photography exhibition, ?The Last Roll of Kodachrome,? between Aug 3 and Sept 4. The images were taken with the last roll of Kodachrome film ever produced

The advent of Ramadan transforms the face of Europe’s largest metropolis Istanbul, rendering it a unique place to witness the traditions associated with the holy month of Muslim and the spirit of coexistence among its resident

The first period of 2011 Istanbul Festivals are over

The events organized by the Istanbul Foundation for Culture and Arts in the first period of the year 2011 are over. Istanbul Biennial, IKSV’s event which makes tremendous impact on the international contemporary art arena, will start in September

Amid the richness of Istanbul’s art scene, The Mik Gallery and Design Store is one of the few galleries representing street art

‘Istanbul has the best nightlife’

I shot for Game in Istanbul and it was my first trip to Turkey and it tops my list of the most fascinating places I have ever been to. The city is a confluence between the East and the West and this is evident in everything ranging from the

On holiday? Go directly to jail
Toronto Sun
By Diane Slawych ,QMI Agency A view of the Four Seasons Istanbul at Sultanahmet, which was a former prison, with the Hagia Sophia in the background. (Courtesy Four Seasons Hotels & Resorts) Tourists are winding up in jail in ever greater numbers these

Kaleidoscopic Istanbul
PopMatters
This is fifteen years number one shoe engineer in all Istanbul! Where you from?? The shoe shiner is now scrubbing Matt’s left boot. ?I have wife and four children,? he says. ?My children need food?they starve.? He makes a pathetic eating gesture

Istanbul markets, bazaars prepare for Ramadan
Hurriyet Daily News
The price of a 400-gram loaf of Ramadan pide bread will remain at 1.5 Turkish Liras this year, Fahri Özer, head of the Istanbul Chamber of Bakeries, told Anatolia news agency. Still, the summertime Ramadan will affect sales of the fast-breaking staple

No meat, no fish, no chicken: Istanbul offers lots of choices for vegetarians

by ISTANBUL-Hürriyet Daily News
The vegetarian restaurants in Istanbul have many delightful cuisine offers and options.

Kevin Spacey comes to Istanbul for latest play
Hurriyet Daily News
US actor Kevin Spacey will be in Istanbul for five performances this October with a starring role in Shakespeare’s ‘Richard III.’ The play, which will be staged as part of the Istanbul Theater Festival, is directed by British director Sam Mendes The

Ben Affleck tours Turkey with Istanbul mayor
San Francisco Chronicle (blog)
Ben Affleck got a first-class tour of Turkey on Tuesday after the mayor of Istanbul volunteered to show him the sights. The actor is shooting his upcoming political drama “Argo,” about the Iran hostage crisis, in Turkey. He jumped at the chance to get

Istanbul abounds with shrines big and small
Hurriyet Daily News
There are more than 300 shrines located around Istanbul that were built often for mystical figures. People are often drawn to shrines for the sense of peace While people prefer to pray in mosques. It is also possible, to see people praying at some of