Europride and Gaga in Rome

from Boing Boing by Jasmina Te?anovic 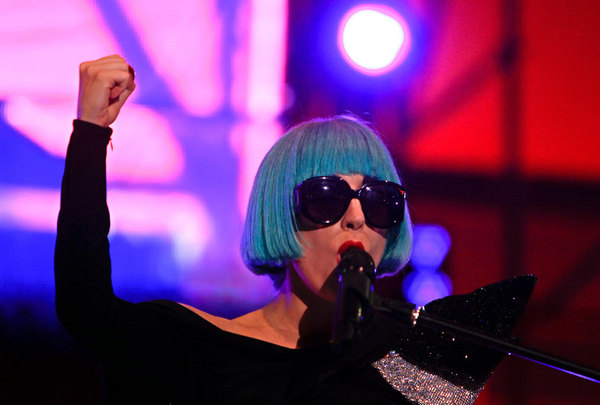 (Lady Gaga performs during a gay pride concert in downtown Rome. Stefano Rellandini / Reuters)
The gay icon Lady Gaga was there wearing her green wig, together with up to one million people marching chanting singing in a carnival gay pride march.
Rome is the capital of Vatican too, the place where Pope lives and preaches from his balcony every Sunday morning about how people should live and love. Lady Gaga’s motto this Sunday was the power of love. She recalled her Italian origin and name ( La Germanotta) and, in a passionate speech, demanded immediate equal rights for the gays, meaning the right to get married, have children etc. While singing her new song Born This Way, an anthem to diversity…

from euro|topics
An overwhelming majority of Italians have voted in a referendum against reintroducing nuclear energy, and at the same time stopped two more government projects. Still smarting from scandals and corruption accusations, Prime Minister Silvio Berlusconi is the clear loser, writes the press, even though the opposition hardly stands to benefit.

How the Egyptian Revolution Inspired Protests in Spain

from MediaShift
Shortly after I moved to Madrid after visiting Cairo, an Egyptian friend tweeted solidarity with the hashtag #SpanishRevolution.
A revolution? In Spain? Was this his attempt to make my new home seem more exciting?
The link he posted led to video of a packed Puerta del Sol — a square in the center of Madrid. And so, someone 2,000 miles away introduced me to a major new movement just two subway stops from my apartment.
Three days earlier, on May 15, demonstrators across Spain took to the street proclaiming “Youth Without Future” and “True Democracy Now.” It was one week before regional elections and Spanish protesters, frustrated with high unemployment and bank bail-outs, took to the streets to express deep dissatisfaction with the dominant government parties.

from Global Voices Online by Filip Stojanovski
Macedonian youth and some older intellectuals have been protesting for five days online and offline in Skopje, urging the authorities to ?solve? the case of murder of a young man by a police officer who served as a bodyguard to a high-ranking official during the post-election rally of the ruling party. On Friday, youth from other cities, like Bitola, Strumica, and Kochani, took to the streets, too.

from BBC News | Europe | World Edition
An Algerian living in France is denied citizenship because of his “degrading” views on women, officials say, pointing to tough new citizenship rules.

by Grahnlaw
If the European Union wants the Europe 2020 (EU 2020) growth strategy to counter the decline in competitiveness, one of the places to look is Sweden, which successfully combines economic progress and social inclusion.

from Global Voices Online by Leila Nachawati Rego
The mobilizations that started on May 15 in Spain have gradually evolved into local meetings, gatherings and different kinds of initiatives all over the country. Most activists are not focusing on the camps any more. Campers have decided to leave the Madrid square ?Puerta del Sol? on June 12, 2011. It became the physical symbol of the people’s unease with their political representatives. Netizens are calling this shift ?Sol se mueve? (Sol is moving), and using the tag #solsemueve on Twitter.

Comitology in academia and practice: Lack of attention and new developments

from Ideas on Europe by Ronny Patz
Recently I talked with a Brussels-based consultant after the occasional sport we happen to do together, and I told him about my current EU policy research. His answer: All you need to know is Comitology.
Now while I doubt that this is fully true, there is probably some truth in it ? and looking into the Comitology register I found some (though not a lot) of interesting insights for my current research that I had ignored so far although I knew that Comitology plays an important role in some regards.

by Grahnlaw
Here is a round-up of my blog posts to date about EU radio spectrum policies, broadband deployment and the Digital Agenda for Europe, including the first entries concerning IT policies in Sweden, one of the most competitive information societies.

from open Democracy News Analysis – by Takis S Pappas
As 200,000 people, led by a movement across Greece calling itself ?The Outraged?, surround the parliament in Athens chanting, ?Thieves, thieves, thieves?, here are ten proposals from a political scientist?s point of view for the Greek government, but also its European partners.

from Public Affairs 2.0 by fhbrussels
The ability of we Europeans to provide for our own defence has been increasingly in doubt since the end of the cold war. I well remember George Robertson, when he was NATO Secretary General, contrasting the size of Europe?s military forces, running into millions, with the inability of European allies to provide just a few thousand troops for NATO operations.

?Why are the traditional media losing their credibility? Why do our citizens no longer trust us? In the Puerta del Sol – the seat of the Spanish Revolution – why were they shouting ?Television: manipulation???
Spain is going through a critical time, and it?s from that discomfort that the Real Democracy Now movement sprang, starting in the Puerta de Sol and spreading around the world. The condition of journalism in our country, as in so many other places, is a part of this upheaval. The crisis has left thousands of journalists on the street, and the media are closing their doors while special envoys and foreign correspondents are already an endangered species. But there are many more problems than these current ones: for some years now in Spain, too many media outlets have been serving the political powers; many are listed on the Stock Exchange, and information has become a mere commodity.

from open Democracy News Analysis – by Philip Ebels
The creation of a new Belgian government seems as unlikely as the Red Devils ever winning the World Cup. Bart de Wever, leader of the nationalist New Flemish Alliance (N-VA), receives much of the blame, but representatives from all political parties across the language frontier are unable to bridge the ever wider gap between north and south

Serbia after Ratko Mladic: the arrest and the rest, Milan Marinkovic

from open Democracy News Analysis – by Milan Marinkovic
The latest opinion poll on the subject revealed that nearly three-quarters of those surveyed wouldn?t have informed the police about the fugitive?s secret location had it been known to them. Fortunately, their assistance was not needed.

Memories of a better future in the aftermath of the Srebrenica genocide, Hariz Halilovich

from open Democracy News Analysis – by Hariz Halilovich
It is worth repeating once again that much of the war in Bosnia was a war of two incompatible ideologies: XIX-century-type clero-fascist nationalism vs. organic Bosnian multiculturalism. The region needs to re-address unfinished business in Bosnia and re-examine the legality, morality and sustainability of the Dayton Peace Accords, which left the country divided along artificial ethnic lines.

by Open Europe blog team
The Open Europe team has spent a couple of weeks delved into the books of the European Central Bank. Trying to get to the bottom of what’s actually on the ECB’s books is a bit of a mission, given that the institution is so opaque that it would probably violate the EU’s Transparency Directive on virtually every single point.