Probably the best photo to represent the state of CHP constituencies… 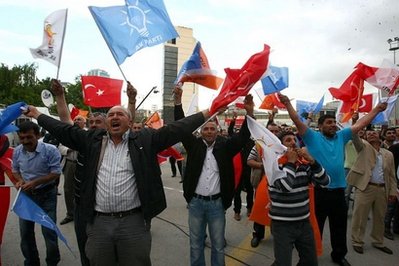 Supporters of Turkey’s ruling AKP ‘Justice and Development Party’ party celebrate with Turkish and party flags after the first results of the parliamentary election, in Ankara. Turkey’s ruling party is set to form a single party government for a third straight term, according to a projection of Sunday’s election results carried on CNN Turk television. (AFP/Adem Altan)

from World news: Turkey | guardian.co.uk
Only question is whether prime minister will win enough votes to secure a mandate to rewrite the country’s constitution
Voters in Turkey look set to make Recep Tayyip Erdogan the most successful prime minister in the history of the country’s multiparty system andafter an election that could open the door for fundamental changes to the constitution. 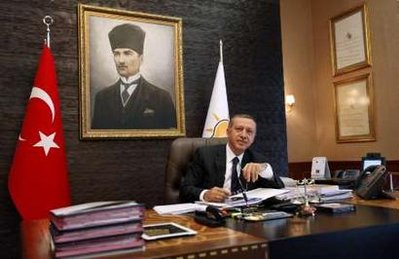 Turkey’s Prime Minister Tayyip Erdogan poses for Reuters at his office at the AK Party headquarters in Ankara June 13, 2011. Erdogan’s AK Party has scored a resounding third consecutive election victory, but he will need to seek consensus to push ahead with a planned new constitution. Erdogan, whose AK has transformed Muslim Turkey into one of the world’s fastest-growing economies and ended a cycle of military coups, won some 50 percent of the vote in Sunday’s election.
REUTERS/Umit Bektas

by Jenny White
The meaning of this election will become clear as we see what PM Erdogan does with his mandate. Yigal Schleifer analyzes what the election results mean for each of Turkey?s four main parties (here). His takeaway:

from FT.com – World, Europe
Erdogan’s populist rhetoric, authoritarian behaviour and conservative values may worry city sophisticates and liberals, but he remains a hero to many

from Hurriyet Dailynews by ISTANBUL – Hürriyet Daily News
Republican People’s Party, or CHP, leader Kemal Kılıçdaroğlu made a speech late Sunday, saying CHP has came out stronger from the election.

from NYT > Turkey by By SEBNEM ARSU
The conservative party of Prime Minister Recep Tayyip Erdogan won with a strong showing that critics fear will be used to further consolidate its power.

from World news: Turkey | guardian.co.uk by Bulent Arinc
The coup era is over. This historic vote shows we are ready to join the club of advanced democracies
the 12 June general election constitutes one of the most important milestones in the history of Turkey’s democracy. For the first time since the beginning of the multiparty system in 1946, a political party has won three consecutive elections, each time increasing its vote. This shows that democracy and democratic institutions in Turkey are firmly established.

Turkey?s Economy is Booming. Does That Mean The End of Democracy For Its People? – Abigail R. Esman – Pen & Sword – Forbes

Post-election Turkey and the Kurdish challenge

from Today’s Zaman, your gateway to Turkish daily news :: Columnists by ÖMER TAŞPINAR
By the time Turkish voters wake up on the morning of June 13 they will face a new parliamentary arithmetic with significant consequences for the political challenges of Turkey.

A new page for Turkey

from Hurriyet Dailynews by HDN
Is yesterday?s general election result a victory for the ruling Justice and Development Party, or AK Parti? Or is it a victory for Prime Minister Recep Tayyip Erdoğan?

from Istanbul Calling by Yigal Schleifer 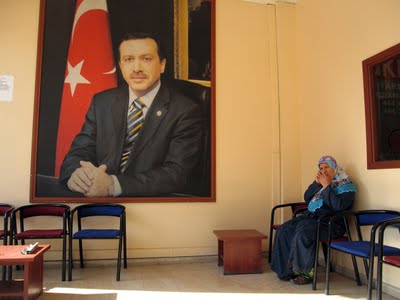 The results of today?s parliamentary elections in Turkey are a bit deceptive. The Justice and Development Party (AKP), of course, can claim to be the day?s big winner, but the three other parties that made it into parliament can also claim something of a victory. That said, the victory parties shouldn?t last that long. Each party ? the AKP included ? comes out of this election facing some significant questions about what the future holds for it.

from Bianet :: English
Ertuğrul Kürkçü, independent candidate of the Labour, Democracy and Freedom Block in Mersin, will go to parliament. In his initial statement made to bianet, he assessed the outcome of the elections for the Block in particular and for Turkey in general.

Scenes from An Election

from World news: Turkey | guardian.co.uk
Incumbent PM Recep Tayyip Erdogan has won the Turkish general election with 49.9% of all votes

Election 2011: whither the CHP after the AKP?s biggest victory yet?

from istanbul notes by Aengus Collins
So, the results are in and they make for miserable reading for Turkey?s main opposition party, the CHP. If the CHP is searching for a silver lining, they will find one in the fact that the party increased its share of the vote from 21 per cent in 2007 to 26 per cent yesterday. Looked at in isolation, that?s a nice little bounce. But when seen in the context of the AKP?s remarkable feat in increasing its vote above the 50 per cent mark, the CHP?s result starts to look decidedly anaemic.

Turkey’s Election and the Paradox of its Entrepreneurs

from Yahoo news
Turkey?s ruling Justice and Development Party (AKP) won by another majority yesterday (50 percent) in that country?s general parliamentary elections. It was an expected victory. Yet as a party of religious conservatives that catapulted to electoral success through entrepreneurship, it is an unexpected paradox. Entrepreneurs don?t normally dominate elections. Big business does.

from Today’s Zaman, your gateway to Turkish daily news :: Turkish Pre by Mehmet Barlas Sabah
When a party in power is able to provide public services to the masses, that party generally gets re-elected the next time around.

from Today’s Zaman, your gateway to Turkish daily news :: Turkish Pre by Mehmet Altan Star
The path towards carrying the country forward is to forget arbitrary and personal calculations, and use ?democratic principles? to bring about ?change.?

Kurdish problem at the door?

from Today’s Zaman, your gateway to Turkish daily news :: Turkish Pre by Oral Çalışlar Radikal
Turkey is entering a new era. We hope that political leaders are able to understand this new picture not as one of tension due to a lack of solutions, but rather of compromise.

After poll, after democracy

from Hurriyet Dailynews by HDN
So what happens after democracy? Don?t misunderstand, this question is not to imply an alternative to the ballot box as a means to organize affairs.

from Hurriyet Dailynews by HDN
A leftist discourse that has trust in itself can provide a steady increase in votes. The election success of independent candidates supported by the Peace and Democracy Party, or BDP, has literally left the 10 percent threshold in disarray.

PM poses as a Mideastern rather than a European leader

from Hurriyet Dailynews by HDN
In his victory speech, which has come to be nicknamed the ?balcony speech,? as he addressed his followers from his party headquarters? balcony, the prime minister did not mention even once Europe, the European Union or the West.

from Hurriyet Dailynews by ANKARA – Hürriyet Daily News
The main opposition?s failure to hit its 30 percent goal in Sunday?s election has sparked an internal feud, with the party leader announcing he will call to account the organizations that were unsuccessful in the campaign.

from World news: Turkey | guardian.co.uk
While other European politicians battle to avoid the blame for economic downturn, Mr Erdogan claims the credit for economic success
Turkey’s prime minister, Recep Tayyip Erdogan, boasts an election-winning record of which other European leaders can only dream. Sunday’s general election victory for his AKP party was not just his third in a row. It was also his most emphatic yet. When the AKP first won power in 2002, it got 10.7m votes and a 34.3% share. On Sunday, on an 87% turnout that puts other countries to shame, Mr Erdogan hoisted those figures to 21.4m (double his 2002 support) and a 49.9% share. Bizarrely, under Turkey’s idiosyncratic proportional representation system, this means the AKP now has 326 members in the 550-seat parliament, compared with 363 in 2002. But this decline in AKP seats, though politically very important, should not detract from a stellar electoral achievement.