Azadiya Welat, the only nation-wide newspaper in Turkey publishing in Kurdish, has been banned for the duration of 15 days. This is the ninth publication ban for the daily. Its printing house in Diyarbakır was searched by the police.

By 31 March, 5 journalists were in prison for their writings, another 42 press members in the context of operations like “Ergenekon” and other major trials and investigations. Within 3 months, 13 people were sentenced to monetary fines and almost 22 years in jail on the grounds of their opinions on the Kurdish question.

The OSCE Election Monitoring Delegation stated that the general elections on 12 June were done in a pluralistic and secure environment. The delegation criticized the 10-percent electoral threshold and urged the state to “establish a media distant of political pressure”. 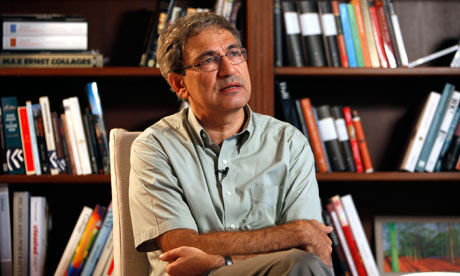 Nobel prizewinning Turkish author Orhan Pamuk, who was fined for talking about the killing of Kurds and Armenians in Turkey. Photograph: Murad Sezer/Reuters

by ISTANBUL – Hürriyet
Funda Uncu, who translated the book ‘Snuff’ into Turkish, was detained by police for six hours in the southwestern district of Bodrum.

from Bianet :: English
Lawyer Tanay announced that he filed a criminal complaint about the people responsible for the torture of three of his clients in a police vehicle and in custody. The torture allegations are documented by photographs taken before his clients were arrested.

According to initial figures, the number of female members of parliament increased from 48 to 78. 472 MPs are male. KADER President Aydın: “A constitution that anticipates de facto equality of women is a must for us”.