let’s just if AKP can get 330 seats in order to make the new constitution alone.

from Journalist in Turkey, background articles, news and weblog about by Fréderike Geerdink
ISTANBUL ? Metin (47) votes for Abdullah Öcalan. That the leader of the Kurdish seperatist movement PKK is in jail, is not relevant. Hij points at the posters of the candidate for pro-Kurdish party BDP. ?I vote for Öcalan via him.? The neighborhood Tarlabasi, a few minutes walk from Istanbuls central Taksim Square, is old,

A Somewhat Landslide at this Point 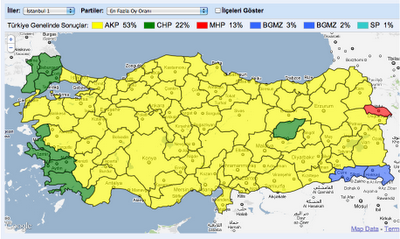 from Bianet :: English
According to the first projections of the parliamentary elections in Turkey, the Justice and Development Party takes the lead again, followed by the Republican People’s Party. The outcome for the candidates of the Labour, Democracy and Freedom Block is lower than expected.

Election 2011: Turkey goes to the polls

from istanbul notes by Aengus Collins
And so it starts. For some hours now Turkey?s 50 million voters have been making their way to polling stations across the country to cast their ballots in another parliamentary election that must be described in pivotal. This has been the story of the AKP era in Turkey?s modern history. Each of its election victories has marked an important stage in the country?s development, for both good and ill. 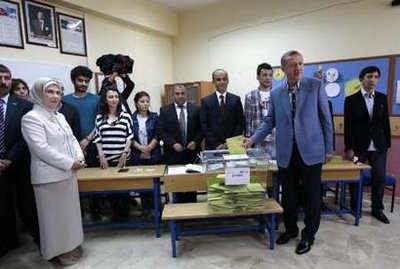 Turkey’s Prime Minister Tayyip Erdogan casts his vote as his wife Emine Erdogan looks on (L) at a polling station in Istanbul June 12, 2011. Turks began voting in an election on Sunday that is expected to return Prime Minister Tayyip Erdogan to office for a third consecutive term and could give him a mandate to rewrite the constitution. A Muslim democracy and European Union-candidate, Turkey has become an economic powerhouse and influential player on the global stage since Erdogan’s AK Party swept to power in 2002. REUTERS/Murad Sezer

from istanbul notes by Aengus Collins
One of the biggest advantages enjoyed by the current AKP government is the fact that it its nine years in power have been characterised by a level of political and economic stability that is remarkable by Turkish standards. Voters value the AKP not just for what it has and hasn?t done, but also for the fact that it has carved out the political freedom (in terms of its solid parliamentary majority) to accomplish what it sets out to accomplish.