Police clash with protesters in Ankara, Turkey, Thursday, Feb. 3, 2011,as they try to stop a march on Parliament by workers protesting government-proposed legislation that they say will strip them of their rights. About ten thousands of workers, many of whom had traveled from across Turkey, had gathered in the capital Ankara and vowed to reach Parliament in defiance of laws that bar demonstrations near the assembly building.? Read more » (AP Photo/Burhan Ozbilici)

The police intervened with tear gas and water cannons against protestors in Ankara who had gathered upon the call of socialist trade unions to encircle the parliament with a chain of people. The labourers wanted to express their protest against the “Bag of Laws”.

Protesters wave flags and banners in Ankara, Turkey, Thursday, Feb. 3, 2011, as police tried to stop a march on Parliament by workers protesting government-proposed legislation that they say will strip them of their rights. About ten thousands of workers, many of whom had traveled from across Turkey, had gathered in the capital Ankara and vowed to reach Parliament in defiance of laws that bar demonstrations near the assembly building.? Read more » (AP Photo/Burhan Ozbilici)

Nearly 10,000 workers protesting in Ankara on Thursday were pushed back with water cannons and pepper spray, a move the opposition said ran counter to the government?s call for a peaceful response to demonstrators in Egypt. (UPDATED)

What was happening in Ankara on Thursday? I just would not want to think that Turkey might still be in the league of those countries that violently beat up peaceful demonstrators 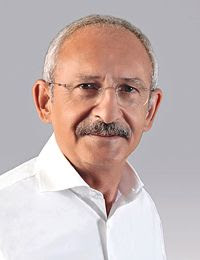 Kemal Kılıçdaroğlu was born in 1948 in the Nazimiye district of Tunceli. He continued his primary and secondary education across various localities of Anatolia including Erciş, Tunceli, Genç, and Elazığ. He completed his Bachelor?s degree in Ankara Economic and Commercial Sciences Academy (Gazi University, Economic and Administrative Sciences Faculty) in 1971.

Should Turkey adopt a presidential system?

by FATMA DİŞLİ ZIBAK
Turkey?s possible adoption of a parliamentary system is once again occupying the country?s agenda following President Abdullah Gül?s comments on a switch to such a system earlier this week.

by İHSAN YILMAZ
Recent surveys suggest that if there were to be an election now, about half the voters would vote for the Justice and Development Party (AK Party), runner-up Republican People?s Party (CHP) would only get half of what the AK Party will get, while the Nationalist Movement Party (MHP) would have serious issues with the 10 percent electoral threshold.

With support of liberals, would CHP get 45 percent of vote?

by Mehmet Barlas
If the Justice and Development Party (AK Party) really started to give off signals that it was supporting state policies that intervened in the private lives of citizens, it would not be just liberals, but by every reasonable and mindful person in Turkey who would criticize this.

A new constitution and a new government

by Nasuhi Güngör
There is a serious unity of thought when it comes to the idea of Turkey?s urgent need for a new constitution, especially one prepared with the contribution of several segments of society.

Who is resisting judicial reform?

by MÜMTAZER TÜRKÖNE
The judiciary is the most backward institution in Turkey. This judgment passed by President Abdullah Gül the other day is not a subjective assessment. The decisions the European Court of Human Rights (ECtHR) issues about applications filed against the state of Turkey is an objective indicator of this backwardness.

How do Gül and Erdoğan differ?

from Hurriyet Dailynews
The alleged relationship between the ruling party and Turkish Hizbullah is adding yet another layer to the already strained ties between the government and the opposition party, with new evidence claimed by the latter.

from Hurriyet Dailynews
Five members of Turkey?s main opposition party have quit the parliamentary constitutional commission in a revolt against the government?s attempts to restructure the judiciary.

from Hurriyet Dailynews by ISTANBUL – Daily News with wires
A campaign by the Antalya Municipality to raise awareness on pollution has sparked debate after names cited on the campaign?s billboards included top state officials.