Spanish journalist Mayte Carrasco spent years covering deadly conflicts across the globe, from Afghanistan to Libya. But it was from the safety of her own home that she faced some of the most vivid threats to her life. Not long after Carrasco

Where Trump gets his ‘news’ 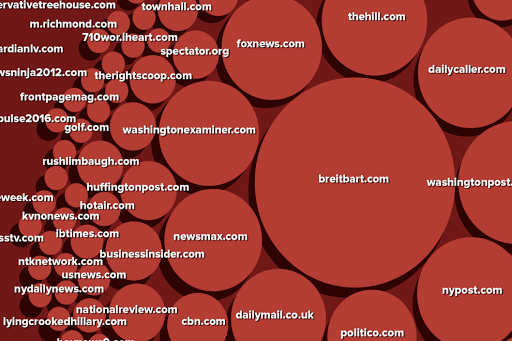 Fascinating and revealing. Great piece of research by Buzzfeed.

4 a.m. is the most productive hour of the day, suggests a Wall Street Journal story from this past August. It’s a light piece brimming with provocation (“4 AM???? Areya kidding me? I didn’t even know there was a 4 AM” writes one commenter), and one that travels well on social media.

Journalism.co.uk
Bear in mind that the social platform where eyewitness media gets posted doesn’t own the copyright

Business execs are still getting a ton of news via email, says Quartz survey

Fifty-nine percent of executives surveyed said they mainly consume news on mobile devices, an increase from 41 percent in 2014.

The Associated Press’ automated coverage of company’s earnings releases has increased firms’ trading volume and liquidity, according to a new study that compared stock performance of companies that the AP only started covering after it began using algorithms to write earning report stories in 2014. (The AP collaborated with the study’s researchers.)