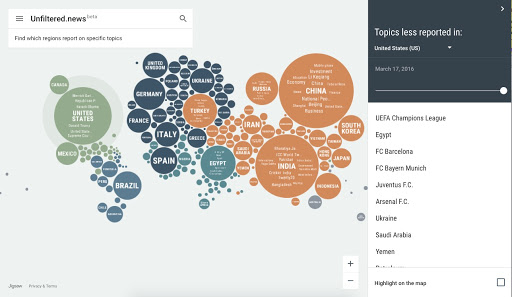 It’s a common lament: Though the Internet provides us access to a nearly unlimited number of sources for news, most of us rarely venture beyond the same few sources or topics. And as news consumption shifts to our phones, people are using even fewer sources: On average, consumers access 1.52 trusted news sources on their phones, according to the 2015 Reuters Digital News Report, which studied news consumption across several countries.

First Draft experts visited the Guardian in mid March to share their expertise and discuss issues of verification in news.

Bellingcat’s Eliot Higgins details advanced geolocation and verification techniques in his presentation below, but don’t forget to check out the other videos:

How can you verify information in the chaos of a terror attack or dig up details about the suspects, like with Dylann Roof’s assault on a church in Charleston, South Carolina, or the multi-site attacks in Paris last November.

Eliza Mackintosh demonstrates the tools and techniques used at Storyful for the recent #FDLive event at the Guardian offices in London.

The public editor is meant to mediate between newsrooms and audiences, but where exactly are newsrooms and audiences today? The pace and scope of press changes are dizzying. Although news websites are still popular online destinations, people increasingly get their news through Facebook and Twitter, with millennials getting political news more from Facebook than anywhere else. Nearly two-thirds of Twitter users and almost 80 percent of Reddit users get news through these platforms. People care deeply about local news, but Twitter does a poor job of surfacing it. News about the Ferguson riots appeared on Twitter, but struggled for visibility on Facebook. And news organizations are now hosting their stories on Facebook servers in a race to make their stories load faster and be shared more. They closely monitor online traffic, use the headline that earns more clicks, encourage journalists to follow story statistics, and wonder how to responsibly cover breaking news already circulating on social media.

Chat bots (and chatty bots) are the new [insert 2015 journalism trend of your choice]. In particular, as the team messaging tool Slack takes over newsrooms, Slack integrations eager to help with this or that productivity thing have proliferated.

The good, bad, and ugly of the world of bots, and the journalistic implications of using them
Nieman Journalism Lab by Shan Wang

Bot or not? Vice’s Motherboard has a piece up today — a “botifesto,” if you will (or if you must) — that gives a comprehensive rundown of just how useful, harmful, and ultimately inescapable bots are to our digital lives.

Bots, “[g]enerally speaking these sets of algorithms are responsible for so much on the backend of the Internet,” are used everywhere from sharing up-to-date information on earthquakes to launching a DDoS attack on a news site followingpublication of an important cover story. They deliver information in Slack, sharing breaking news or helping human editors decide which stories will likely take off on social media. The New York Times’ Election Bot is even helping send 2016 presidential election questions straight to the newsroom.

Tip: Bookmark this list of essential digital journalism tools
Journalism.co.uk
Keep on top of your to-do list with these apps that can help you be more efficient at work

Report: 2016 will be critical for growth of VR in journalism

A report out Sunday from the Knight Foundation and the USA Today Networksays 2016 is shaping up to be a significant year for virtual reality journalism as more outlets continue to experiment with VR as they recognize its enormous potential, even though there are concerns over the format’s longterm viability.

The island of knowledge and the shoreline of wonder: Using data visualization to prompt exploration

Editor’s note: Our friend Alberto Cairo is one of the world’s true experts on data visualization in journalism. He’s got a new book out, The Truthful Art: Data, Charts, and Maps for Communication (a followup to his earlier The Functional Art), in which he “explains in clear terms how to work with data, discover the stories hidden within, and share those stories with the world in the form of charts, maps, and infographics.”

Tip: Bookmark this handy guide to posting on Twitter

Journalism.co.uk
Check out this comprehensive manual for making the most of the platform’s 140 characters
Ukraine and MH17: 5 lessons from a 19-month geolocation puzzle
firstdraftnews.com by Bellingcat

Many – especially in the Russianmedia – believed this video footage was damning to the Ukrainians, showing what could be the anti-aircraft equipment that downed the passenger plane.

Publishers of all sizes, including parties of one, will be able to distribute their content on Apple News, the company announced Tuesday. From Apple’s site:

You can author once and News will optimize your content for all iOS devices, so your readers will have a great experience no matter which device they use. It’s easy to connect to existing content management systems, and you get access to a rich suite of tools to measure user engagement with your content.

Who is posting comments on news stories, and why do they do it?
Nieman Journalism Lab by Shan Wang

Who’s actually adding to the civil discourse/garbage fire that is the comments section of news sites (the sites that still keep open a place for such reader contributions, at least)?

When Philip Balboni sold his international news website GlobalPost to WGBH’sPublic Radio International last year, he could have exited journalism as well. After all, he’s been in the business for 49 years now. But “I realized, unexpectedly, that I wasn’t ready to leave my profession,” Balboni said. 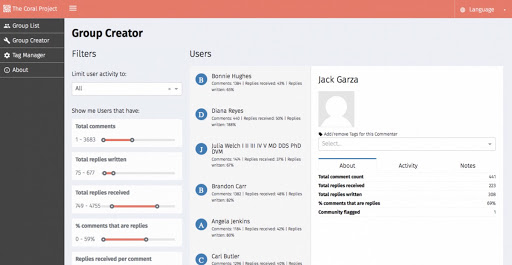 Have an interactive, data-driven story that doesn’t fit at your news outlet? The Thrust wants to know
Nieman Journalism Lab by Shan Wang

In 15 states across the U.S. and 9 countries around the world, you can find gay bars with names that are some variation of the word “Eagle.” They have no formal relationship to one another, but they’re the closest thing, Ken Schwenckewrites, “gay men have to a global franchise.” Schwencke’s piece “In Search of the Eagle,” published on a new site called The Thrust, is an exploration of the history of these bars and how they got their collective name — but also how Schwencke compiled this list of Eagle bars.

Journalism.co.uk
The outlet has also been experimenting with Slack bots, aiming to enable collaboration in the newsroom

The New York Times is continuing its digital expansion in niche products, announcing Thursday that it was launching Watching, a standalone TV and movie site and newsletter and expanding Well, the Times’ health section. We were first to tell you about the new TV/movie section back in January.

The projects were developed by NYT Beta, the in-house group that’s created efforts such as The New York Times en Español and NYT Cooking. These types of products are key to the Times’ future as it looks to build new products that attract new readers — who can eventually be converted into new subscribers.

“Mobile web performance is bad — I challenge you to find someone who disagrees with that,” Mic’s chief strategy officer Cory Haik told me last monthwhen we chatted about the official rollout of Google AMP. “When our pages load too slowly on mobile, as a publisher, we’re losing an audience, and that is painful.”

As the campaign in New Hampshire intensified leading up to the state’s presidential primary, New Hampshire Public Radio reporter Brian Wallstinwanted to understand more about the glut of political ads that were blanketing the state’s TV stations.

Did a passenger film the terrifying moment turbulence struck a flight from Florida to Italy in January? Did Daesh gun down 200 children in a mass execution? Did a Syrian boy save a girl from under a hail of bullets? Did a golden eagle swoop in to carry a young child away from his family in a park in Montreal?

The answer to all these questions is no, despite video footage claiming to show the events as real. This didn’t stop multiple news organisations publishing the videos as true, however. Despite advances in verification tools and techniques, spotting fake videos is still a particularly difficult nut to crack.

Politico Europe aims to become the continent’s ‘ESPN for politics’

Journalism.co.uk
Eleven months after its launch, Politico Europe is looking to expand its audience outside of Brussels, in cities such as London and Berlin

16 women paving the way in digital media and technology

Journalism.co.uk by Abigail Edge and Catalina Albeanu
Our pick of some of the most inspiring women in media and tech, plus some suggestions from our community on Twitter

Newsonomics: The New York Times reinvents Page One — and it’s better than print ever was

Ah, the art of the broadsheet Page One, with its mystical above-the-fold, below-the-fold double secret handshake code, its photo telegraphing The Big Story, its fonts delivering nuance, and its italics offering their own sweet siren song of understanding? Our never-thought-about assumption: this is what newspapers should look like, and they did, city to city, nation to nation. We hardly considered it design; it just was.

As Facebook prepares to roll out Instant Articles to all publishers next month, the company said Monday that it’s partnering with WordPress.com’s parentAutomattic to release an Instant Article WordPress plugin.

The plugin creates a special RSS feed that automatically optimizes posts to appear as Instant Articles. The plugin is open-source and customizable. Its documentation is available here on Github.

5 steps for building digital products in the newsroom, The Washington Post way

Journalism.co.uk
‘Our biggest competitors these days aren’t The New York Times or CNN. They are Hulu, Netflix and any place a user might spend their time’

From “service desk” to standalone: How The New York Times’ graphics department has grown up

Since he arrived at The New York Times in 1999, Steve Duenes has seen a lot of change.

The Times associate managing editor for graphics finds himself in the midst of multiple revolutions. “Graphics” have moved from their supplemental role in the old world to center-stage on our smartphones and laptops. Smartphones themselves now demand unprecedented thinking in miniaturized storytelling. The newsroom itself has become a different place, with budding collaboration slowly easing out members of competing desks.

IAB releases a primer to help publishers deal with adblockers

This week — as The New York Times began testing a campaign against adblockers— the IAB Tech Lab released a “primer describing the tactics available to publishers in response to adblocking.”

This is new for the Times, I believe pic.twitter.com/tmJNWboYUx

IAB doesn’t venture to make any one specific recommendation, but suggests publishers follow a process it calls DEAL:

On Thursday, after more than a year and a half of reporting, The Washington Post published a story on a Marine’s attempt to clear his name after a sexual assault investigation. The piece, by reporter John Woodrow Cox, is long — more than 8,000 words, divided into seven chapters — so the Post introduced a number of new features in its online presentation to try to make it more manageable for readers on both desktop and mobile.