An Istanbul court has ordered the confiscation of the latest issue of Nokta magazine on the grounds that it “incites crime” due its cover. The magazine’s editor-in-chief and chief news editor have been arrested
Nokta Journal Chief Editor, Managing Editor Arrested
Bianet :: English
Nokta Journal Chief Editor, Cevheri Güven, and Managing Editor, Murat Çapan have been arrested, and its website blocked with the charge of “inciting public to arm against government”.
Turkey rounds up Erdogan ‘rivals’
BBC News | Europe | World Edition
Two days after the election in Turkey, police arrest 44 people suspected of having links to influential US-based cleric Fethullah Gulen.
MAIN FOCUS: Which way will Erdoğan lead Turkey? | 03/11/2015
euro|topics

Following the election in Turkey Europe is discussing what course President Recep Tayyip Erdoğan will take now that his party has regained its absolute majority. Some commentators fear he will exploit his key position vis-à-vis the EU on refugee policy. Others hope he will adopt more moderate policies and give the country’s economy a boost.

Turkish gendarmerie forces have detained a total of 11 people, including the co-mayor of the southeastern province of Mardin’s Mazıdağı district, in operations against the outlawed Kurdistan Workers’ Party (PKK)
58 employees fired from opposition media outlet in Istanbul

More than 50 employees of several opposition media outlets that were recently placed under the management of a trustee panel have been relieved of their duties, daily Hürriyet has reported
JOINT PRESS RELEASE BY HDP, HDK, DBP, DTK: KCK Must Persist Truce, Government Must Stop Operations
Bianet :: English
The joint declaration issued by HDP, HDK, DBP and DTK Co-Chairs has said “We are ready to take all kinds of right steps in case a positive approach is developed”.

Violence against opposition parties and their premises, arrests and crackdown on press freedom hindered ability to campaign freely, report says

International observers of Turkey’s parliamentary elections have criticised the climate of violence and fear that preceded the vote, saying the security environment, arrests of opposition activists and stifling of press freedomscombined to make the campaign unfair.

After the Justice and Development Party (AKP) secured an unexpected victory in Turkey’s Nov. 1 snap election eyes have turned to its economic pledges, which are estimated to require a budget of 22.3 billion Turkish Liras per year

HDP calls for resuming of peace process at parliament

The Peoples’ Democratic Party (HDP) and a number of other Kurdish groups have called on the government to establish a joint commission at parliament to resume the stalled peace process.

Now that President Recep Tayyip Erdogan’s party won with a stunning landslide in Sunday’s snap election, his ambition to establish a presidential system of government is very much alive.
Turkish police detain 46, including high-ranking officials, in ‘parallel state’ operation

At least 46 people, including a number of high-ranking officials and security personnel, were detained in 18 Turkish provinces on Nov. 3, as part of an anti-terror operation in the Aegean province of İzmir against the followers of the U.S.-based cleric Fethullah Gülen
Turkish PM celebrates election victory in Istanbul

Prime Minister Ahmet Davutoğlu said on Nov. 3 that the winner of the Nov. 1 election was “Turkey and its democracy.” “There are no defeated sides in this election,” Davutoğlu said
The Vote and Beyond : Lessons from the Turkish Repeat Elections
Ideas on Europe by EU-Asia Institute

A guest contribution by Başak Alpan,
from the Middle East Technical University, Ankara. 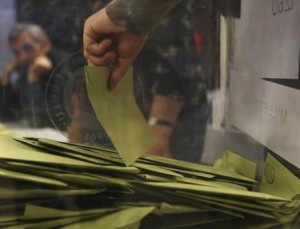 Here’s one of the few good things about being a political science professor in Turkey: elections are never only boring econometrical calculations that no one is interested in, but each election gives you an ample amount of shock, perplexity, and challenge to cope with.

Creating a brand-new constitution will be one of the foremost tasks of the new government following the Nov. 1 polls, the Justice and Development Party (AKP) has said

Turkish elections: ‘This is still a success for us Kurds’

In the central Sur district in Diyarbakir, a predominantly Kurdish city in Turkey’s south-east, several men and women watched as workmen fitted a new iron door, replacing one destroyed during recent clashes in the neighbourhood.

Why were Surveys Mistaken?

Assoc. Prof. Dr. Emel Şerife Akça has said that since process lived in past five months in Turkey wasn’t ordinary, it is normal for the surveys to be mistaken about election results.

European observers say violence marred the run-up to polls in Turkey in which the ruling Justice and Development Party regained its majority.

NYT > Turkey by By ROGER COHEN

The Turkish president played with fire and turned “stability” into the key word of the campaign.

Turkey witnessed a new high on Nov. 1 with a turnout of over 85 percent of eligible voters in the snap elections held only five months after the June 7 parliamentary elections.