This piece was written more than a month ago for a monthly magazine. For some reasons, maybe because of my sloppy style, it wasn’t published. It still has some validity so here it is: 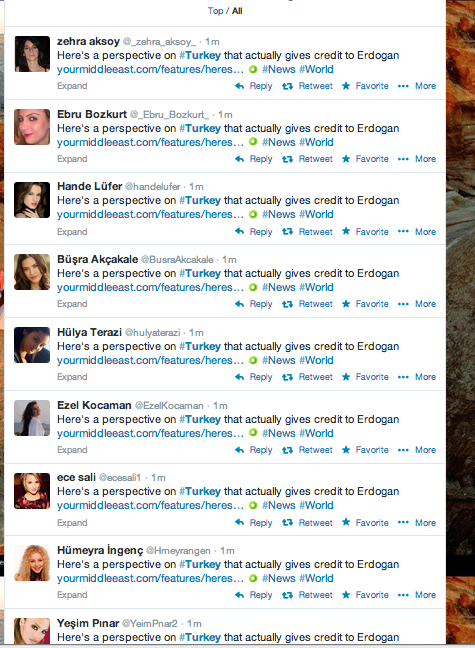 This essay is an attempt to outline AKP?s social media strategies during and after the Gezi Park Protests. In lack of substantive data, I will have to ground my arguments mostly on my own observations and in my practical involvement in citizen journalism circles and political blogging activities. This essay attempts to demonstrate major patterns of pro-AKP strategies and to compare them with opponent political campaigns when possible.

There is a need for further research in order to substantively demonstrate the role of social media during Gezi Park Protests and afterwards. However, one can still argue that this was still a turning point in social media usage ((“Geziparki: Social Media’s Role in Turkey’s Protest Movement.” 2013. 10 Feb. 2014 <http://cgcsblog.asc.upenn.edu/2013/06/07/geziparki-social-medias-role-turkeys-protest-movement/)and at least a quantitative rise could easily be observed (“Turkey Embraces Social Media.” 2012. 10 Feb. 2014 <http://www.voanews.com/content/turkey-embraces-social-media-149236475/370184.html>). However, to find out exact numbers is not easy. According to Turkish Police Forces, during and after Gezi Park protests that continued effectively throughout June 2013, active Twitter users in Turkey increased from 2 millions to 10 millions (“MEDYATAVA – Gezi olayları twitter kullanımını arttırdı!.” 2013. 6 Jan. 2014 <http://www.medyatava.com/haber/gezi-olaylari-twitter-kullanimini-arttirdi_99983>). However, no criteria of how these figures were founded are given and its purpose might be to serve for the ruling party?s (AKP) claim of organized conspiracy against the government. A social media monitoring agency in Turkey claims that during Gezi Park protests daily new accounts opened rise from 20 thousand (in average in previous months) to 25 thousand (from 29 May to 4 June 2013) and what really happened was citizens? massive activation of their passive accounts in addition to some newcomers (“SOZyal: #YeniMedyaOkulu 5 – Veri Analizi – Blogger.” 2013. 10 Feb. 2014 <http://sozyal.blogspot.com/2013/12/yenimedyaokulu-5-veri-analizi.html>).

In recent years in Turkey, Twitter has become one of the more popular media through which citizens who feel that they are not represented by the mainstream express themselves.  This applies, in particular, to politics. It can be argued that the aforementioned Gezi Park protests after which political debate turned an intense battle waged on Twitter and through other social media platforms. Here, I will stick to a discussion of the use of Twitter – as this is, today at least,  the most dominant of the various platforms and I will limit myself with AKP strategies. However, when comparison needed, keeping all reservations of generalization in mind, I compare AKP strategies with Gezi Park protesters and Hizmet Twitter campaigns that started against the closure decision of private preparation schools towards the end of 2013 and continued since then.

Before those discussions, however, there are some issues about which the reader should be aware in terms of the AKP?s general approach to its own communications and the media in general.

Sticking to our discussion of Twitter, there are several easily observable and categorisable patterns of use amongst the AKP and its supporters.

First of all, despite the Turkish Prime Minister Recep Tayyip Erdogan being rarely positive about social media, there are many users in his cadre.  One category that is easily observed is that of AKP officials, parliamentarians and ministers. Memet Simsek (finance ministers), Melih Gokcek (mayor of Ankara) and Ibrahim Kalim (AKP advisor) are frequently giving there opinions in 140 characters or less.  These have become opinion leaders in the Twittersphere, some have earned their blue verified badges.

The second category of AKP users are what, in internet argot, are referred to as ?trolls?. These are users who have the specific goal of attacking opposing or contradicting views.  Twitter users such as @Esadce, @Eminimsi, @DetroitliKizil and @WUattack are seen to be such trolls and they launch ad hominem  attacks against AKP opponents on the platform.

The final group of AKP-supporting users identified are the Twitter accounts (such as @Mustafaselanik3) who are believed to leak intelligence information.  Many conspiracy theories are seen to be leaked from these accounts and then re-tweeted by other pro-AKP Twitter users.

What?s in a handle?

Many AKP-supporting Twitter users prefer not to use their real identity online or, those that do, couple their identity with pro-AKP or Rabia (the four-fingered salute that emerged to signify support for former Egyptian President Mohamed Morsi following the killing of his supporters in Cairo?s Rabia al-Adawiya Square on August 14, 2013) symbols.   Previously, supporters of the

Gezi Park movement and the Hizmet movement traditionally used their own offline identities in online communities. However, as the government intimidation against social media users increased,  anonymous pro-Gezi accounts started to emerge, too. In the mean time, some pro-Hizmet account emerged to leak corruption files.

Supporters of Gezi were already heavy online users before the protests started. This meant that, after May 28th 2013, these people were able to simply transfer their social media use to support the protests.  Supporters of other groups in Turkey, however, were, in general, late comers to the social media world. Many new, but real Twitter users came along with Hizmet activism – with several anonymous accounts emerging to leak rumours from Turkey?s bureaucracy (one such example is the account @TwitAnkara). One should also not be misled with PM Erdoğan?s continuous criticism of Twitter and social media in general. At an official party administration level, many party branches had already their own Twitter accounts, and there had been regular workshops for better social media usage. The author of this essay was invited as a speaker to one of the workshops (“AK Parti İstanbul’dan sosyal medya atağı – Yenisafak.com.tr – 08.02 …” 10 Feb. 2014 <http://yenisafak.com.tr/teknoloji-haber/ak-parti-istanbuldan-sosyal-medya-atagi-22.04.2013-512896>). However, these efforts did not turn ordinary AKP sympathizers into frequent users and have a social capital in digital media battles.

When they picked up on the uses of social media and Twitter hashtags in particular, AKP supporters were quick to coordinate campaigns and embrace the use of automated Twitter Bots – software that automatically tweets a list of messages to spread messages, spam links and attract followers.  Despite claims to the opposite in pro-AKP circles, there is evidence of relatively centralized campaigns which lead to ?Trending Topics? – that is hashtags that are tweeted at a greater rate than others.  When compared to pro-Preparatory School Twitter campaigns in Turkey, all pro-AKP hashtags stayed for a short time in Twitter?s Trending Topics categories. This was the same during the Gezi Protests when many pro-AKP hashtags appeared in Trending Topics, and quickly dissapeared. Another observation is that pro-AKP hashtags frequently appear in reaction to existing opposition hashtags. Their tone is either defensive or aggressive. Most discourses are full of conspiracy theories and frequently attack critical users. Ad hominem attacks, or threatening with blacklisting is frequent. Humour, when present, accompanies the aggressiveness. An example of this can be seen at the cartoons seen after the death of Ahmet Atakan – an anti-government protester in Antakya. A pro-AKP humor magazine Cafcaf published a cartoon that claims his friends actually did throw Mr. Atakan from the roof (“CafCaf Dergisinden Çirkin Ahmet Atakan Karikatürü – Başka Haber.” 2013. 10 Feb. 2014 <http://www.baskahaber.org/2013/09/cafcaf-dergisinden-cirkin-ahmet-atakan.html>). Pro-AKP cartoonist Salih Memecan?s cartoon had the same theme (“Memecan, son eylemleri işte böyle çizdi – On5yirmi5.” 2013. 10 Feb. 2014 <http://www.on5yirmi5.com/haber/mizah/karikatur/136066/memecan-son-eylemleri-iste-boyle-cizdi.html>). Later, in early January 2014, when protests and clashes in Hamburg, Germany occurred (“Diren Hamburg | Zaman Hollanda.” 2014. 10 Feb. 2014 <http://www.zamanhollanda.nl/haber/gundem/2307/diren-hamburg>), pro-AKP users started an hashtag (#DirenHamburg) supposedly in defense of protesters but actually to mock Gezi protesters.

Pro-AKP voices focus their social media use on Twitter while other social and political movements spread their own use across the media eco-system. This can particularly be seen in the Gezi Park movement where the use of online mapping, blogs, video sharing platforms and crowdsourced knowledge production are just some examples of the other platforms used (For some of the media used: “Occupy Gezi | Know Your Meme.” 2013. 8 Jan. 2014 <http://knowyourmeme.com/memes/events/occupy-gezi>).

Compared to campaigning by the AKP and Hizmet movement, the Gezi Park campaigns illustrate the most decentralized forms of organization. Gradually a few anonymous or centralized Twitter accounts appeared and played a main role (such as the RedHack Twitter account) but in general the formation of trends remained decentralized. Hizmet campaigns seem to be the most centralized ones. Accounts such as @SosyalPencere or some opinion leaders play a central role and, as such, provided a protracted manner of Twitter campaigning. These accounts determine new hashtags for Twitter and other supporters push them to become trending topics.

The Internet is relatively decentralized. Its continues to evolve open endedly. In this context, a top-down campaign style has trouble functioning effectively. The generation of digital natives who grew up using media on the Internet have even more difficulty in understanding command and control systems and, therefore continuously develop ways in which to challenge it.

Proposed amendments to Turkey?s Internet law (“Turkey clamps down on internet as Erdogan tightens grip on power.” 2014. 12 Jan. 2014 <http://www.ft.com/cms/s/0/af179212-7b6b-11e3-a2da-00144feabdc0.html>), if passed in to law, will increase digital surveillance and online censorship. The amendments to the bill appear to follow the AKP?s general approach to social media in particular and to internet in general: A refusal to understand the nature of media but an insistence on controlling it. The new law will not deter digital natives from surfing independently through the many easily available and widely known tools to circumvent online censorship. Besides, as far as this writer observes, digital natives are not easily scared and they will give their response in a creative and civil manner. Turkey?s burgeoning Internet and start-up economy may receive a substantial blow, however, as web hosting and related services will be hard to sustain within Turkey?s boundaries.

Despite its members? increasing and diversified use of social media, AKP seems to have taken the same approach to social media as it took for traditional media. Instead of a long term media production strategy, the party seems to prefer containing social media in somewhat externally by proposing current Internet Law. Since there is no media company to buy and silence or no organization like RTÜK to explicitly regulate social media, AKP?s social media strategy seems to be based on either with a law to criminalize usage to prevent freedom of expression or with party activists to intimidate other users?.

More substantive piece on the use of automated Twitter bots here and here.

Two pieces on state of journalism in Turkey through the case of @140Journos. Here and here.