lrb.co.uk ? Seymour M. Hersh ? Apr 6 ? Obama’s change of mind had its origins at Porton Down, the defence laboratory in Wiltshire. British intelligence had obtained a sample of the sarin used in the 21 August attack and analysis demonstrated that the gas used didn’t match the batches?
here are some critiques to Mr. Hersh’s arguments:
foreignpolicy.com/articles/2013/12/09/sy_hershs_chemical_misfire#sthash.mbEl4qRe.zeK7Dzq7.dpbs ? http://www.huffingtonpost.com/2013/12/08/seymour-hersh-syria-report_n_4409674.html ? http://eaworldview.com/2013/12/syria-special-chemical-weapons-conspiracy-wasnt-seymour-hershs-exclusive-dissected/ ?

In the mean time, yet another claim here:

the Pulse of the Middle East ? Author: Tulin Daloglu April 4, 2014 On May 11, 2013, Reyhanli, a Turkish town on the border with Syria, was attacked with twin car bombs, leaving behind an official toll of 52 deaths and 146 injuries. But the mystery of who attacked Reyhanli

Turkey and EU to hold committee meet in June

A scheduled meeting between senior officials from Turkey and the EU has been postponed by mutual will in order to garner more comprehensive content, Ankara said

erikmeyersson.com ? Erik ? Apr 6, 2:10 AM ? (Note: This post may be updated) My previous post documented a peculiar relationship between the share of invalid ballots and higher voting share of the ruling AKP government in last week’s local elections in Turkey. In both Ankara and Istanbul?

The fear of possible military coups have never left the collective imaginary of all forms of Turkish public, including the conservative constituency.

With the March 30 local elections, the authoritarian turn in Turkish politics, and probably its regional belligerence as well, is legitimized as the ruling party gained almost 44 % of the votes. Common sense may refer to this moment of electoral victory as a democratic one. However, democracy is less about winning elections and more about how the opposition is treated

In Turkey’s political contest, rule of the law is the real loser

The events of the past three months threw a stark light on the way the AKP government and Gülenists used the justice system in the past for common political ends. The result has been a clear erosion of the rule of law. Turkey?s voters deserve better than that. 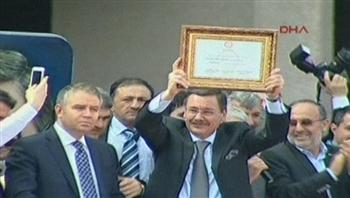 It is a valid question to ask whether Turkish Prime Minister Tayyip Erdoğan would say that he was ready to ?negotiate? the candidacy

Turkey?s election failings may lead to yet another legitimacy crisis for Erdoğan

In line with the AKP government?s rudimentary understanding of ?democracy? that considers it synonymous with elections, Erdoğan has reiterated countless times that the solution to all problems, including the allegations against his government, lay in that holy of holies: the Ballot Box.