A few dailies in opposition spared their first pages for the war plans Turkish leaders had. Citizens leave these papers in subways, cafes etc, to disseminate news…

In the mean time the dailies of the dark side below target their colleagues and blame them being traitors.

Letter from Zadie Smith, Nobel laureate Orhan Pamuk, Salman Rushdie and other writers says Turkey’s social media ban is an ‘unacceptable violation of the right to freedom of speech’

Few argue with an evaluation attributed to Israel’s envoy to Turkey Gabby Levy in 2009, and written in a US cable revealed by Wikileaks. ?He’s a fundamentalist,? Levy was quoted as saying. ?He hates us religiously, and his hatred is spreading.? Erdogan

U.S. and EU officials have reacted to the Turkish government’s move to block access to YouTube, too

Why freedom of expression is under threat in Turkey

We are writers from around the world who love, live and breathe words. We are united in our belief that freedom of expression is a universal and fundamental human right. We are gravely concerned about “the freedom of words” in Turkey. We connect both within and across borders through words, written and spoken. A free exchange of ideas is essential for democracy, as well as for creativity, empathy and tolerance. As revealed in a Pen report on last year’s protests,Turkey has many freedom of expression issues, from criminal defamation to self-censorship within the mainstream media, to police violence against journalists and a narrowing of freedom of expression on the internet.

‘PM Erdoğan is defying an order from his very own courts,’ the resolution said

Despite ‘Outrage’ Over Twitter Ban, Turks Hold Off on Street Protests 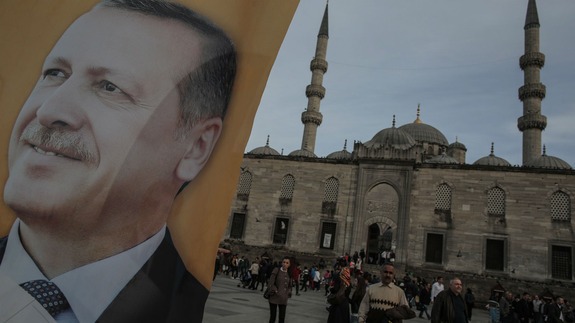 Turkey’s Prime Minister Recep Tayyip Erdoğan shut down another social network on Thursday, blocking access to YouTube just a week after banning Twitter. And, despite a history of public demonstrations, Turkish people have yet to take to the streets en masse

The victim is still waiting for the official medical report from forensics almost 3.5 years after the incident

Crises and Elections: What are the Consequences for Turkey?s EU Bid?

GTE Policy Brief (Istituto Affari Internazionali) No. 13, March 2014,5 p. by Eduard Soler i Lecha * The economic crisis in Europe and the political tension in Turkey are bad news for Turkey-EU relations. The EU crisis has weakened Turkey?s traditional allies, made European public opinion more reluctant to enlarging the EU further, deteriorated the

1 thought on “A few honorable dailies against the dark side.. Citizens use guerrilla advertising tactics using opposition dailies in subways etc…”